You are the owner of this article.
Edit Article Add New Article
You have permission to edit this article.
Edit
NEWS
OPINION
LIFE+ARTS
SPORTS
THE BLUFF
CARTOONS
SOCIAL JUSTICE
VIDEOS
ELECTION 2020
EDITOR'S PICK
CORONAVIRUS
WITH GRATITUDE
PODCAST
MORE
1 of 2 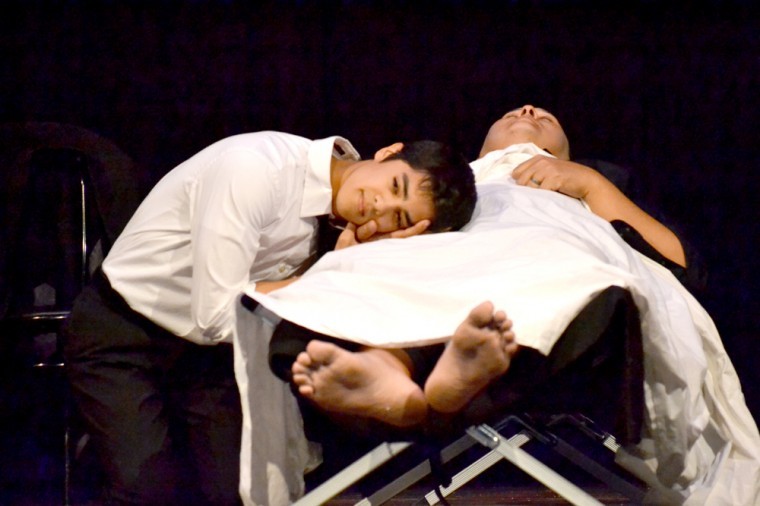 Thomas Ireton mourns over the body of Timothey Fitzgerald in the first segment of the Shinsai theatre, entitled “Child is Father to the Man.” 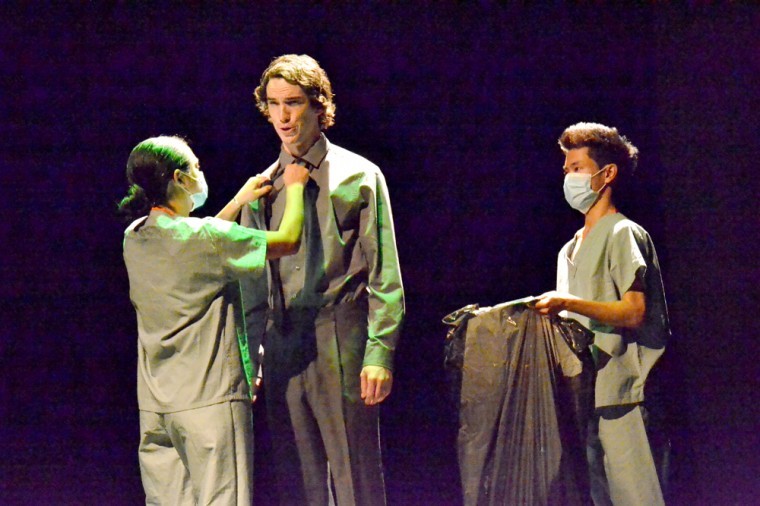 From left to right, Kimiko Miyashima, Brandon Shypkowski and Kit DeZolt star in “A Guide to Japanese Etiquette” by Doug Wright. This segment was directed by Professor Kevin Wetmore.

Thomas Ireton mourns over the body of Timothey Fitzgerald in the first segment of the Shinsai theatre, entitled “Child is Father to the Man.”

From left to right, Kimiko Miyashima, Brandon Shypkowski and Kit DeZolt star in “A Guide to Japanese Etiquette” by Doug Wright. This segment was directed by Professor Kevin Wetmore.

With Japan remaining damaged by their earthquake and tsunami a year ago, their theaters have become damaged and are in need of repair.

As a part of a relief effort, the Shinsai Japanese theatre has made its way to the states in such places as New York and Los Angeles.

However, the L.A. Times reported on March 8 in its article, “A big show in NYC, but little in LA for Japan quake benefit,” that there were less performances in Los Angeles compared to New York. Despite “Shinsai: Theaters for Japan” being a “nationwide initiative” to raise funds for devastated theater companies in Japan, Los Angeles still has far fewer performances.

“Shinsai,” which means “great earthquake” in Japanese, would involve performances of various Japanese plays and dances in order to raise money to rebuild the destruction of Japanese theaters after the catastrophic earthquake and tsunami in 2011.

However, with only having two performances of “Shinsai: Theaters for Japan” in Los Angeles despite the widespread support for the project, one of the performances took place at LMU’s own Strub Theatre with theatre students, professors and alumni performing both Pulitzer Prize-winning material and their own original compositions. The performance was March 11, to mark the one-year anniversary of the Japanese earthquake.

Co-chair of the theatre arts and dance department and director of theatre arts Kevin J. Wetmore Jr., who was also quoted in the L.A. Times article, had a personal tie to the efforts to rebuild Japanese theaters. “I go to Japan every other summer and teach Japanese theatre, and [I] know some of the playwrights involved [with Shinsai],” Wetmore said. “So, the second I saw that we could do something for Japan, it was sort of the perfect triple threat: we could help the theaters in Japan, we could give opportunities to our own students and we could also introduce our audience and students to some plays and playwrights that they might have not otherwise had a chance to see performed,” he said.

In the 11 performances of the night, there were several interpretive-style dances, along with short, minimalist plays with running themes of family and loss, along with many references to the devastation and suffering caused by the natural disasters. Along with plays written by Japanese playwrights such as Naomi Iizuka and Yoji Sakate, American playwrights such as Richard Greenberg and Doug Wright pitched in with their own plays.

According to Wetmore, when organizing the event, “The agreement with the organizers in New York is that you can do any of the plays, [commissioned for the event] and you can add any of your own stuff if you’d like.”

De La Rosa commented on her piece, which involved three women all confronting their husband, lover and father, who has just died in the earthquake. “For my piece, it was about giving voice to the voiceless. I don’t hold back on the vulgarity because I say what should be said,” De La Rosa said.

The Co-chair of the theatre arts and dance department and Director of dance Patrick Damon Rago also choreographed and performed his own piece, “Ephemeral,” near the end of the performances. Rago says that seeing all the pictures on the news of the devastation “made me realize all these things we as people think are permanent are really not … everything is ephemeral.”

Winnie Werre, a senior theatre arts major, performed in two of the 10-minute plays, and has her own personal ties to the cause. “I’m half Japanese – my mother is from Japan and moved here when she was in her early 20s – and my family still lives out there. I’m very proud of my Japanese heritage and very honored to be asked to be a part of this,” Werre said.

Junior theatre arts major Christina Foster, who attended the event, said, “I’m proud that LMU’s theatre [arts] and dance department brought awareness because a lot of times, disasters go out of the media after about a month, and people forget that Japan is still suffering and needs our help.”

Luisa Barron is asst. A&E editor at the Loyolan & previously worked as a copy editor for over a year. She is a screenwriting & philosophy double major and more than well aware that this combination will get her less than zero job offers upon graduation.

Sorry, there are no recent results for popular videos.