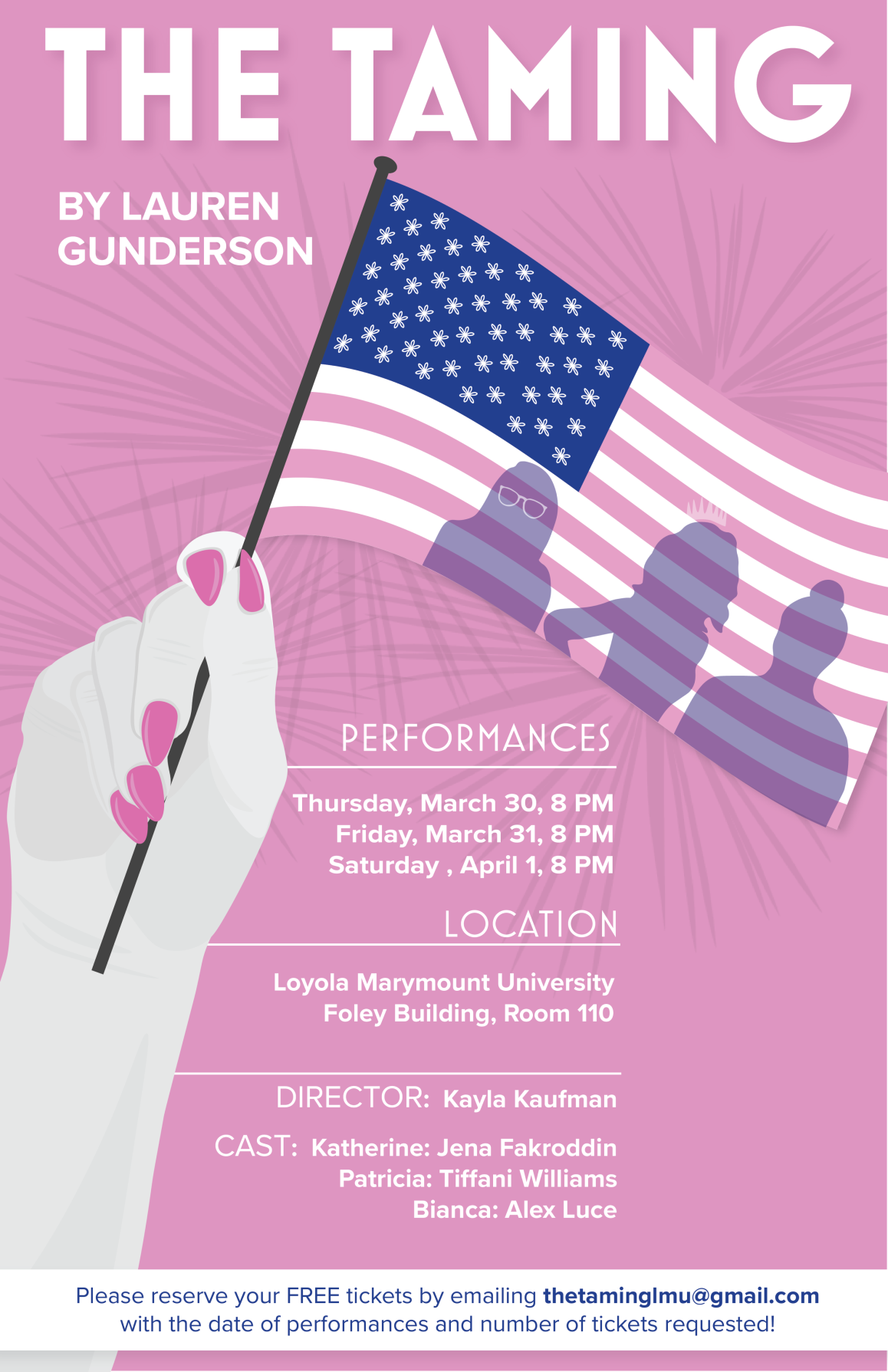 With March being Women’s History Month, more people have been turned their attention to female role models and strong women in general.

If you haven’t figured out how to celebrate yet, you should consider seeing LMU’s production of “The Taming.” The title and the show are loosely based on Shakespeare’s “The Taming of the Shrew,” but you’ll have to see the play to discover how.

The play, written by Lauren Gunderson (who is among the most-produced playwrights currently alive), tells the story of what happens when Miss America kidnaps someone conservative and someone liberal, and tells them that the three of them are going to rewrite the Constitution.

This play premiered back in 2013, but the relevance of it is more palpable than ever.

I know that you may be thinking “Oh good, ANOTHER political play,” but this isn’t your average play. “The Taming” is a show completely centered around political discourse and what happens when strong ideals come to blows.

This free play is a very small production because senior theatre and film production double major Kayla Kaufman has chosen to direct it for her senior thesis.

On the topic of the process of choosing a play, Kaufman said, “Well, I had read this play a couple of years ago but reread it the morning after Election Day 2016. I was feeling discouraged, not only because of the results, but because of how extremely difficult it had been the whole election season to talk to anyone who held beliefs different from mine. This play talks about those difficulties, and also why it is so important to have those discussions anyway.”

Kaufman says she also knew she had to direct this to encourage more discussion, more empathy and the development of a more perfect union.

Another important thing to mention about this show is that it’s incredibly funny. Through all of the sexual tension (which there is an abundance of), well placed jokes and accurate commentary on government, this show is guaranteed to keep you laughing from the first minute until the last.

“The Taming” is a show that everyone can laugh at and relate to. You’ll feel pretty smart as your U.S. history knowledge finds its way back into your brain and if you care about this country even a little bit, you will sympathize and root for these characters as they work their way towards resolution.

The show is relatively unknown, and this performance will be the first time it is being performed in Los Angeles. Throughout these next few years, this show will gain popularity not just because of its relevance, but because it is a gateway to discussion.

Junior Williams said, “I think people should see this play because the political state of our country, as of now, is in danger. This play will shed light on different political aspects, regardless of who you vote for.”

“The Taming” will be running from March 30 to April 1 at 8 p.m. There are only three shows, so reserve those seats soon!

The run time is a bit over an hour, and it is a must see for this spring show season.

Tickets are free, and all you need to do is send an email to thetaminglmu@gmail.com saying which date you’d like to attend and how many seats you’ll need.