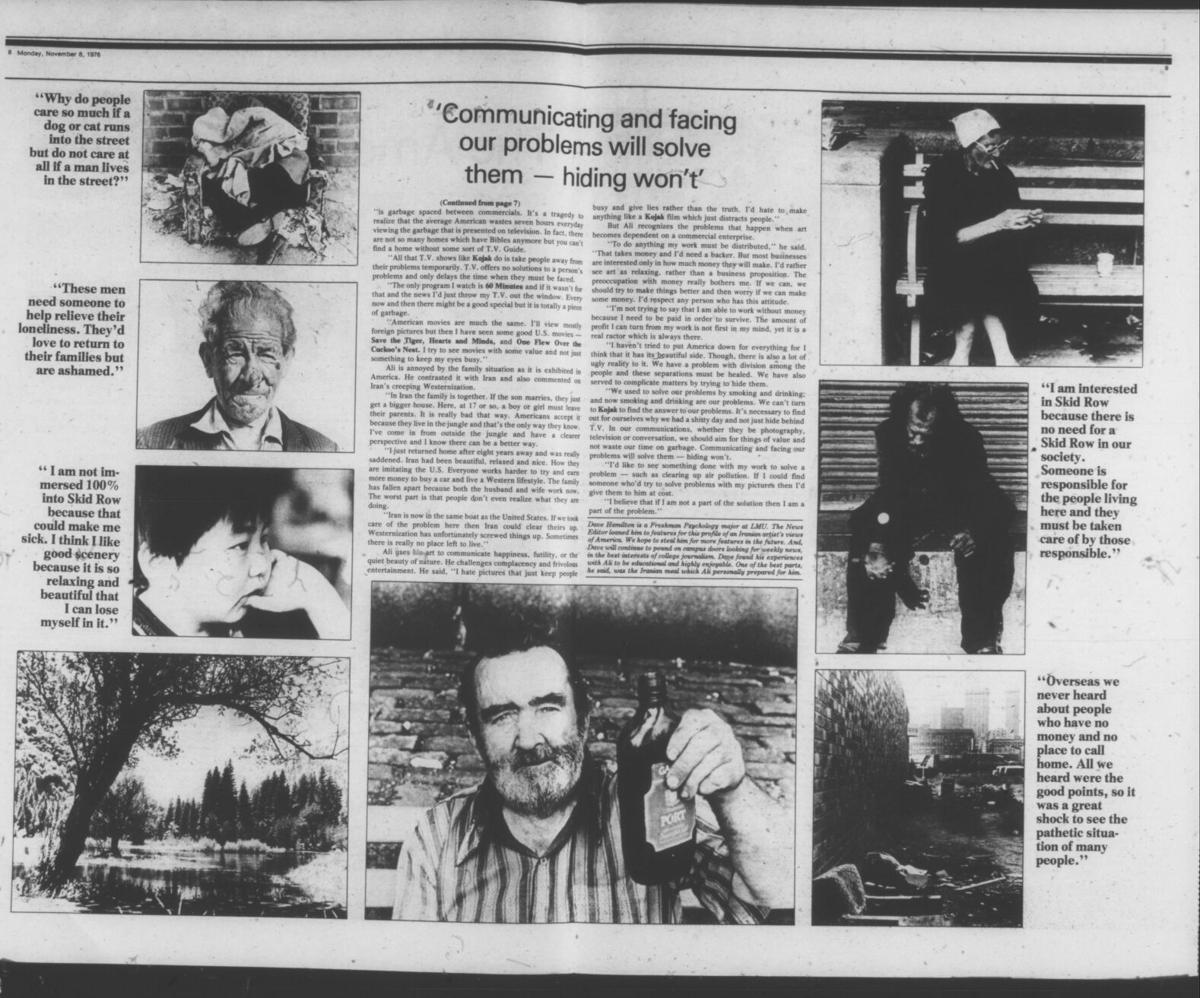 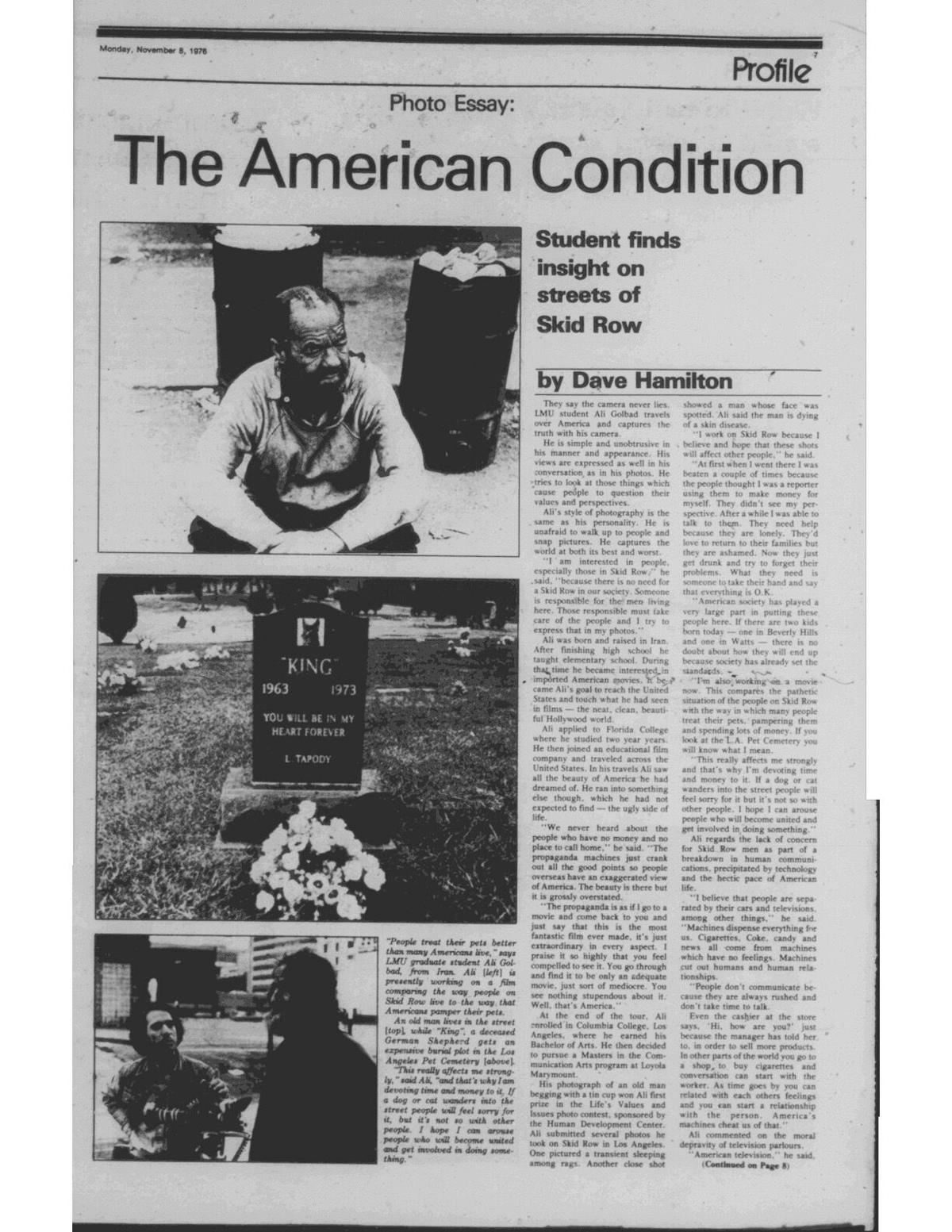 This profile was first published in 1976 to showcase the first place winner of that year's Life’s Values and Issues photo contest — a competition that was hosted by the Loyolan and sponsored by LMU's Human Development Center. We are republishing it here as a part of the newspaper's Centennial Anniversary.

They say the camera never lies. LMU student Ali Golbad travels over America and captures the truth with his camera.

He is simple and unobtrusive in his manner and appearance. His views are expressed well in his conversations, as in his photos. He tries to look at those things which cause people to question their values and perspectives.

Ali’s style of photography is the same as his personality. He is unafraid to walk up to people and snap pictures. He captures the world at both its best and worst.

‘I am interested in people, especially those in Skid Row,” he said, “because there is no need for a Skid Row in our society. Someone is responsible for the men living there. Those responsible must take care of the people and I try to express that in my photos.”

Ali was born and raised in Iran. After finishing high school he taught elementary school. During that time he became interested in imported American movies. It became Ali’s goal to reach the United States and touch what he had seen in films — the neat, clean, beautiful Hollywood world.

Ali applied to Florida College where he studied two years. He then joined an educational film company and traveled across the United States. In his travels Ali saw all the beauty of America he had dreamed of. He ran into something else though, which he had not expected to find — the ugly side of life.

“We never heard about people who had no money and no place to call home,” he said. “The propaganda machines just crank out all the good points so people overseas have an exaggerated view of America. The beauty is there but it is grossly overstated.

“The propaganda is as if I go to movie and come back to you and just say that this is the most fantastic film ever made, it’s just extraordinary in every aspect. I praise it so highly that you feel compelled to see it. You go through and find it only to be an adequate movie, just sort of mediocre. You see nothing stupendous about it. Well, that’s America.”

At the end of the tour, Ali enrolled in Columbia College, Los Angeles, where he earned his Bachelor of Arts. He then decided to pursue a Masters in the Communication Arts program at Loyola Marymount.

His photograph of an old man begging with a tin cup won Ali first prize in the Life’s Values and Issues photo contest, sponsored by the Human Development Center. Ali submitted several photos he took on Skid Row in Los Angeles. On pictured a transient sleeping among rags. Another close shot showed a man whose face was spotted. Ali said the man is dying of a skin disease.

“I work on Skid Row because I believe and hope that these shots will affect other people,” he said.

“At first when I went there I was beaten a couple times because the people thought I was a reporter using them to make money for myself. They didn’t see my perspective. After I a while I was able to talk to them. They need help because they are lonely. They’d love to return to their families but they are ashamed. Now they just get drunk and try to forget their problems. What they need is someone to take their hand and say everything is O.K.

“American society has played a large a part in putting these people here. If there are two kids born today — one in Beverly Hills and one in Watts — there is no doubt how they will end up because society has already set the standards.

“I’m also working on a movie now. This compares the pathetic situation of the people on Skid Row with the way that many people treat their pets, pampering them and spending lots of money. If you look at the L.A. Pet Cemetery you will know what I mean.

“This really affects me strongly and that’s why I’m devoting time and money to it. If a dog or a cat wanders into the street people will feel sorry for it, but it’s not so with other people. I hope I can arouse people who will become united and get involved in doing something.”

Ali regards the lack of concern for Skid Row men as a part of a breakdown in human communications, precipitated by technology and the hectic pace of American life.

“I believe that people are separated by their cars and televisions, among other things,” he said. “Machines dispense everything for us. Cigarettes, Coke, candy and news all come from machines which have no feelings. Machines cut out humans and human relationships.”

“People don’t communicate because they are always rushed and don’t take the time to talk. Even the cashier at the story just says, ‘Hi, how are you?’ just because the manager has told her to, in order to sell more products. In other parts of the world you go to a shop to buy cigarettes and conversation can start with the worker. AS time goes by you can related with each other's feelings and you can start a relationship with the person. America’s machines cheat us of that.”

Ali commented on the moral depravity of television parlours.

“American television,” he said, “is garbage spaced between commercials. It’s a tragedy to realize that the average American wastes seven hours everyday viewing the garbage that is presented on television. In fact, there are not so many homes which have Bibles anymore but you can’t find a home without some sort of T.V. Guide.

“All that T.V. shows like Kojak do is take people away from their problems temporarily. T.V. offers no solutions to a person’s problems and only delays the time when they must be faced.

“The only program I watch is 60 Minutes and if it wasn't for that and the news I’d just throw away my T.V. out the window. Every now and again there might be a good special but it is totally a piece of garbage.

“American movies are much the same. I’ll view mostly foriegn pictures but then I have seen some good U.S. movies — Save the Tiger, Hearts and Minds, and One Flew Over the Cuckoo’s Nest. I try to see movies with some value and not just something to keep my eyes busy.”

Ali is annoyed by the family situation as it is exhibited in America. He contrasted it with Iran and also commented on Iran’s creeping Westernization.

“In Iran the family is together. If the son marries, they just get a bigger house. Here, at 17 or so, a boy or girl must leave their parents. It is really bad that way. Americans accept it because they live in the jungle and that’s the only way they know. I’ve come in from outside the jungle and have a clearer perspective and I know there can be a better way.

“I just returned home after eight years away and was really saddened. Iran had been beautiful, relaxed and nice. How they are imitating the U.S. everyone works harder to try and earn more money to buy a car and live a Western lifestyle. The family has fallen apart because both the husband and the wife work now. The worst part is that people don’t even realize what they are doing.

“Iran is now in the same boat as the United States. If we took care of the problem here then Iran could clear theirs up. Westernization has unfortunately screwed things up. Sometimes there is really no place left to live.”

Ali uses his art to communicate happiness, futility, or the quiet beauty of nature. He challenges complacency and frivolous entertainment. He said, “I hate pictures that just keep people busy and give lies rather than the truth. I’d hate to make anything like a Kojak film which just distracts people.”

But Ali recognizes the problems that happen when art becomes dependent on a commercial enterprise.

“To do anything my work must be distributed,” he said. “That takes money and I’d need a backer. But most businesses are interested only in how much money they will make. I’d rather see art as relaxing, rather than a business proposition. The preoccupation with money really bothers me. Iff we can, we should try to make things better and then worry if we can make some money. I’d respect any person that has this attitude.

“I’m not trying to say that I am able to work without money because I need to be paid in order to survive. The amount of profit I can turn from my work is not first in my mind, yet it is a real factor which hasn’t always been there

“I haven’t tried to put America down for everything for I think that it has its beautiful side. Though, there is also a lot of ugly reality to it. We have a problem with division among people and these separation must be healed. We have also served to complicate matters by trying to hide them.

“We used to solve our problems by smoking or drinking; and now smoking and drinking are our problems. We can’t turn to Kojak to find the answer to our problems. It’s necessary to find out for ourselves why we had a shitty day and not just hide behind T.V. In our communications, whether they be photography, television or conversation, we should aim for things of value and not waste our time on garbage. Communicating and facing our problems will solve them — hiding won’t.

“I’d like to see something done with my work to solve a problem — such as clearing up air pollution. If I could find someone who’d try to solve problems with my pictures then I’d give them to him at a cost.

Dave Hamilton is a Freshman Psychology major at LMU. The News Editor loaned him to features for this profile of an Iranian artist’s views of America. We hope to steal him for more features in the future. And, Dave will continue to pound on campus doors looking for weekly news, in the best interest of college journalism. Dave found his experiences with Ali to be educational and highly enjoyable. One of the best parts, he said, was the Iranian meal which Ali personally prepared for him.