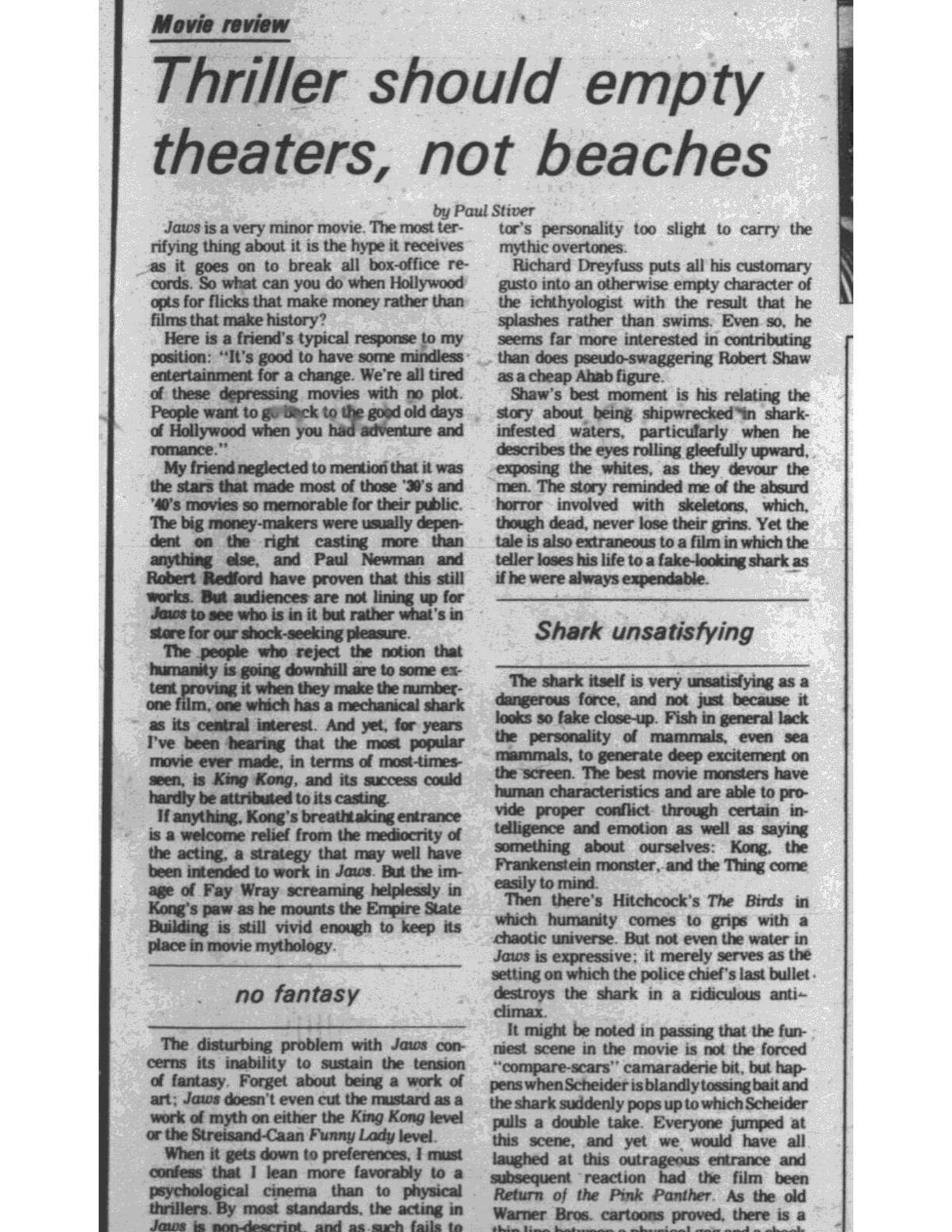 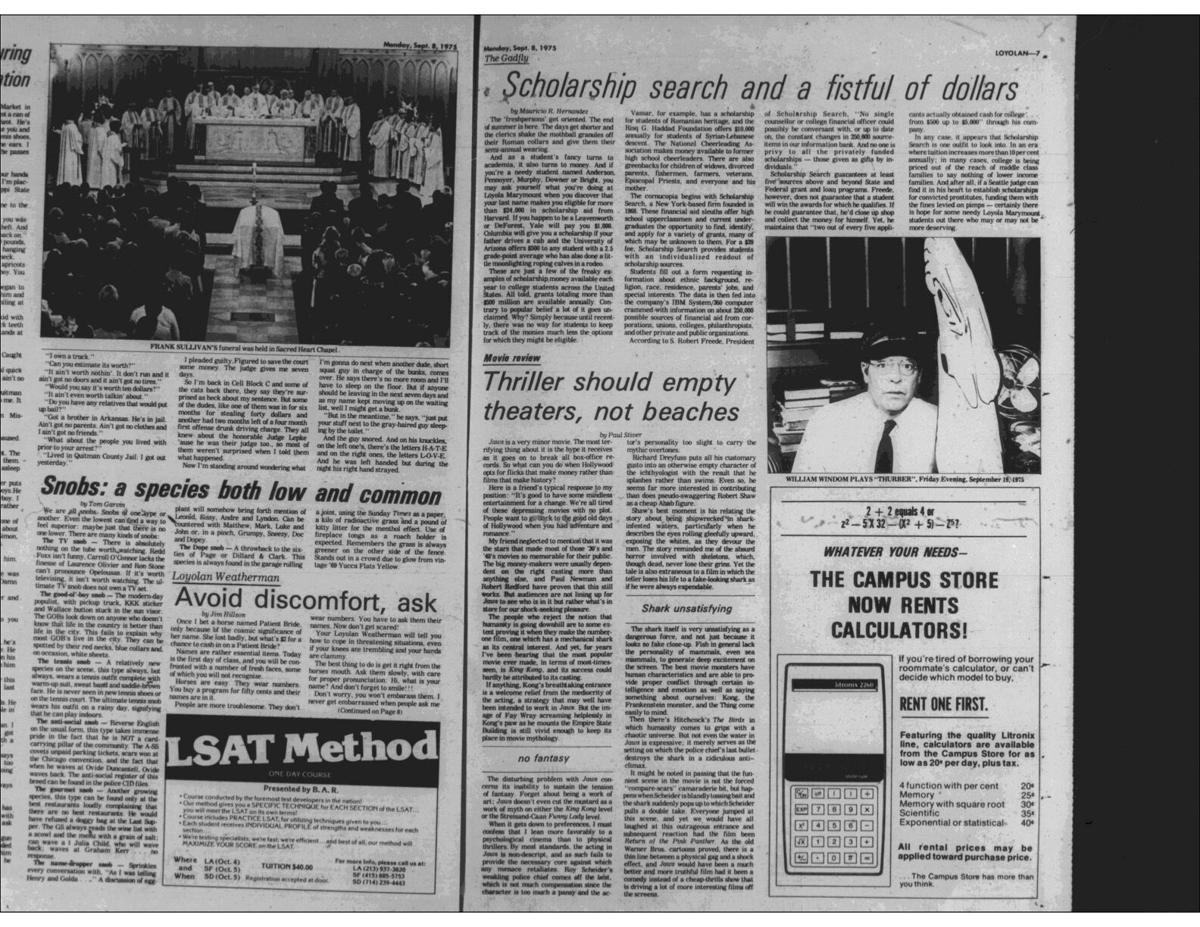 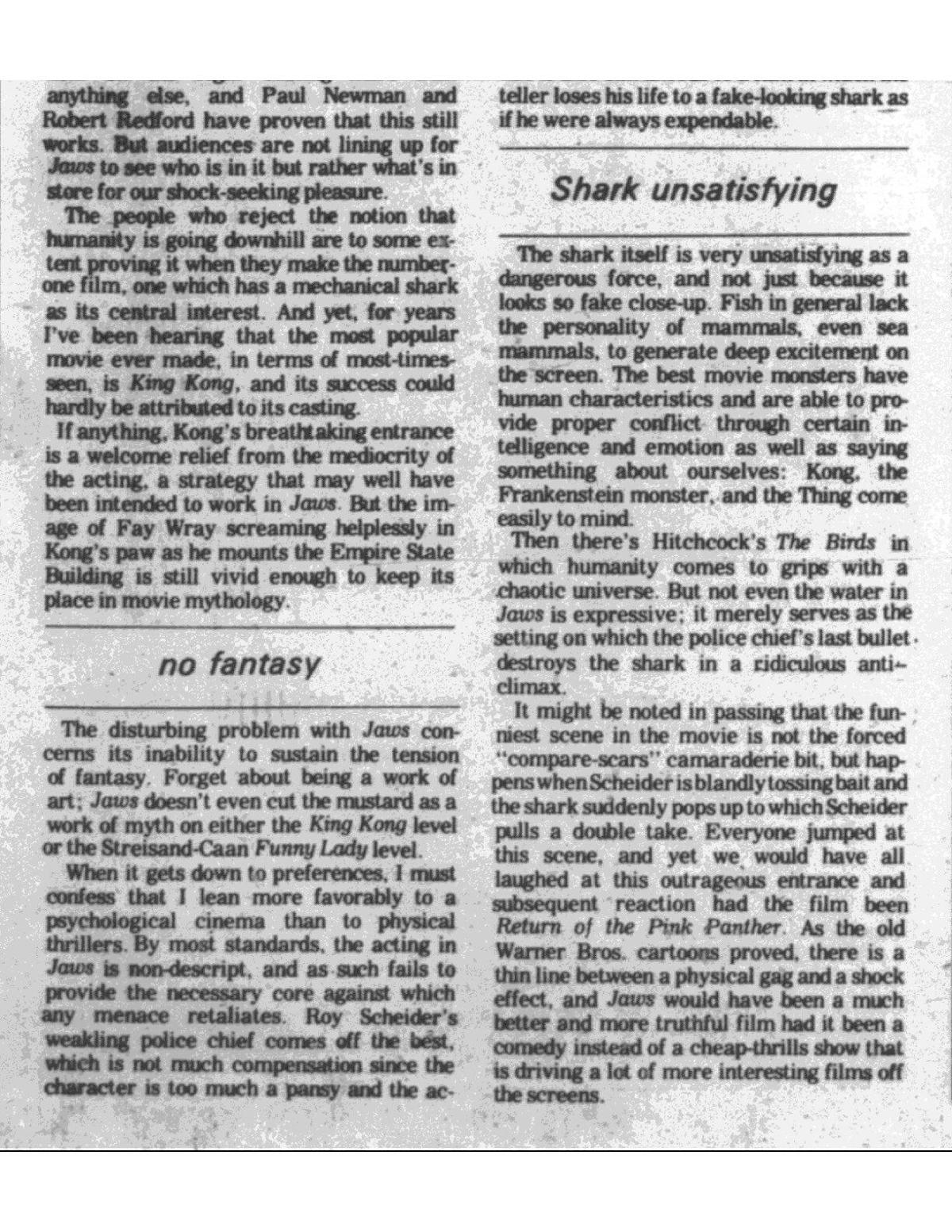 This review of Universal Studios' "Jaws" was originally published on Sept. 8, 1975 — two weeks after the film was released in theaters. We are republishing it here as a part of the Loyolan's centennial anniversary

Thrillers Should Empty Theaters, Not Beaches

Jaws is a very minor movie. The most terrifying thing about it is the hype it receives as it goes on to break all box-office records. So what can you do when Hollywood opts for flicks that make money rather than films that make history?

Here is a friend’s typical response to my position: “It’s good to have some mindless entertainment for a change. We’re all tired of these depressing movies with no plot. People want to get back to the good old days of Hollywood when you had adventure and romance.”

My friend neglected to mention that it was the stars that made most of those ‘30's and ‘40’s movies so memorable for their public. The big money-makers were usually dependent on the right casting more than anything else, and Paul Newman and Robert Redford have proven that this still works. But audiences are not lining up for Jaws to see who is in it but rather what’s in store for our shock-seeking pleasure.

The people who reject the notion that humanity is going downhill are to some extent proving it when they make the number-one film, one which has a mechanical shark as its central interest. And yet, for years I’ve been hearing that the most popular movie ever made, in terms of most-times-seen, is King Kong, and its success could hardly be attributed to its casting.

If anything, Kong’s breathtaking entrance is a welcome relief from the mediocrity of the acting, a strategy that may well have been intended to work in Jaws. But the image of Fay Wray screaming helplessly in Kong’s paw as he mounts the Empire State Building is still vivid enough to keep its place in movie mythology.

The disturbing problem with Jaws concerns its inability to sustain the tension of fantasy. Forget about being a work of art; Jaws doesn’t even cut the mustard as a work of myth on either the King Kong level or the Streissan-Caan Funny Lady level.

When it gets down to preferences, I must confess that I lean more favorably to a psychological cinema than to physical thrillers. By most standards, the acting in Jaws is non-descript, and as much fails to provide the necessary core against which any menace retaliates. Roy Scheider’s weakling police chief comes off the best, which is not much compensation since the character is too much a pansy and the actor’s personality too slight to carry the mythic overtones.

Richard Dreyfuss puts all his customary gusto into an otherwise empty character of the ichthyologist with the result that he splashes rather than swims. Even so, he seems far more interested in contributing than does pseudo-swaggering Robert Shaw as a cheap Ahab figure.

Shaw’s best moment is his relating the story about being shipwrecked in shark-infested waters, particularly when he describes the eyes rolling gleefully upward, exposing the whites, as they devour the men. The story reminds me of the absurd horror involved with skeletons, which, though dead, never lose their grins. Yet the tale is also extraneous to a film in which the teller loses his life to a fake-looking shark as if he were always expendable.

The shark itself is very unsatisfying as a dangerous force, and not just because it looks so fake close-up. Fish in general lack the personality of mammals, even sea mammals, to generate enough deep excitement on the screen. The best movie monsters have human characteristics and are able to provide proper conflict through certain intelligence and emotion as well as saying something about ourselves: Kong, the Frankenstein monster, and the Thing come easily to mind.

Then there’s Hitchcock’s The Birds in which humanity comes to grips with a chaotic universe. But not even the water in Jaws is expressive; it merely serves as the setting on which the police chief’s last bullet destroys the shark in a ridiculous anti-climax.

It might be noted in passing that the funniest scene in the movie is not the forced “compare-scares” camaraderie bit, but happens when Scheider is blandly tossing bait and the shark suddenly pops up to which Scheider pulls a double take. Everyone jumped at this scene, and yet we would have all laughed at this outrageous entrance and subsequent reaction had the film been Return of the Pink Panther. As the old Warner Bros. cartoon proved, there is a thin line between physical gag and a shock effect, and Jaws would have been a much better and more truthful film had it been a comedy instead of a cheap-thrills show that is driving a lot of more interesting films off the screens.