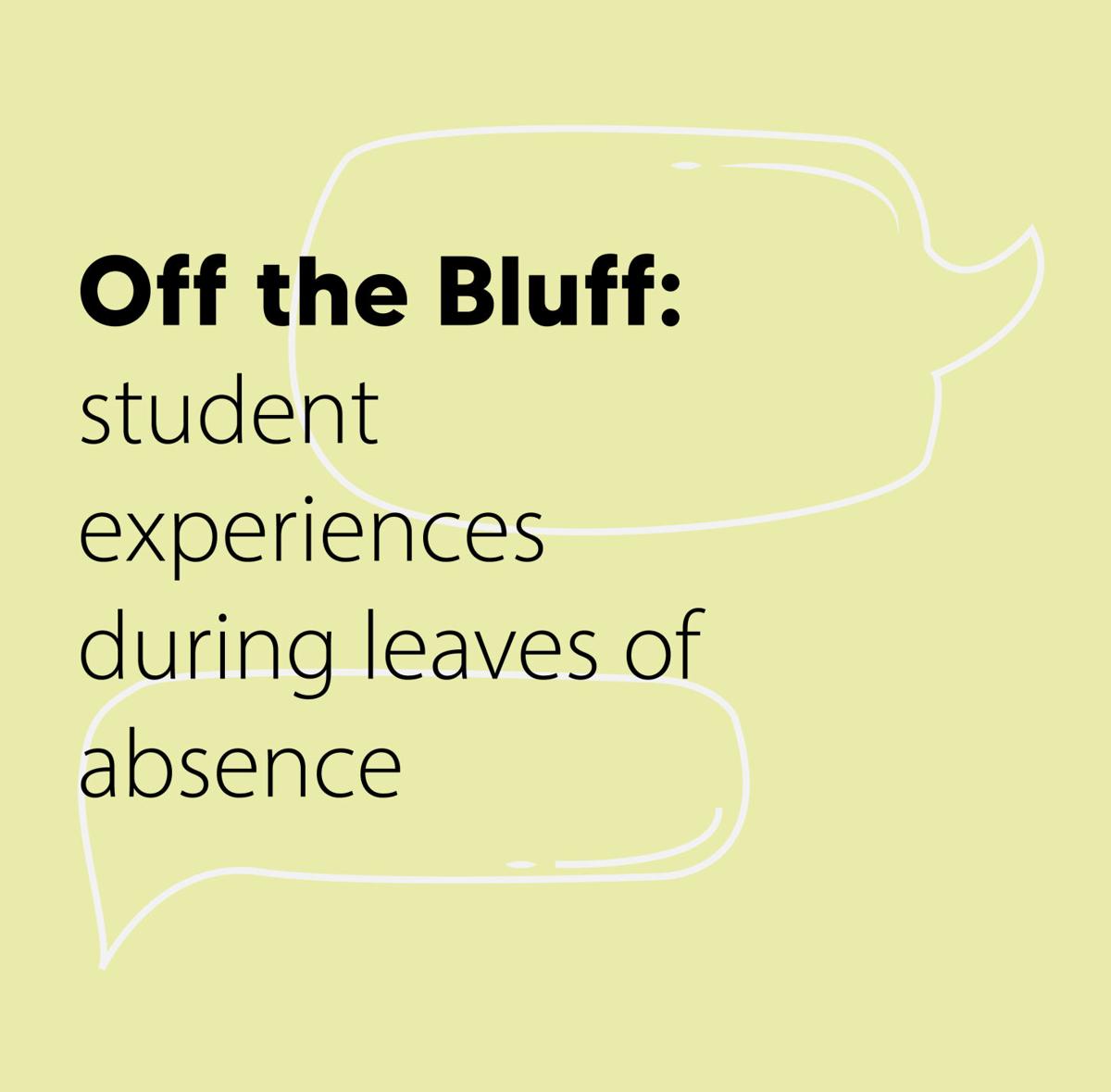 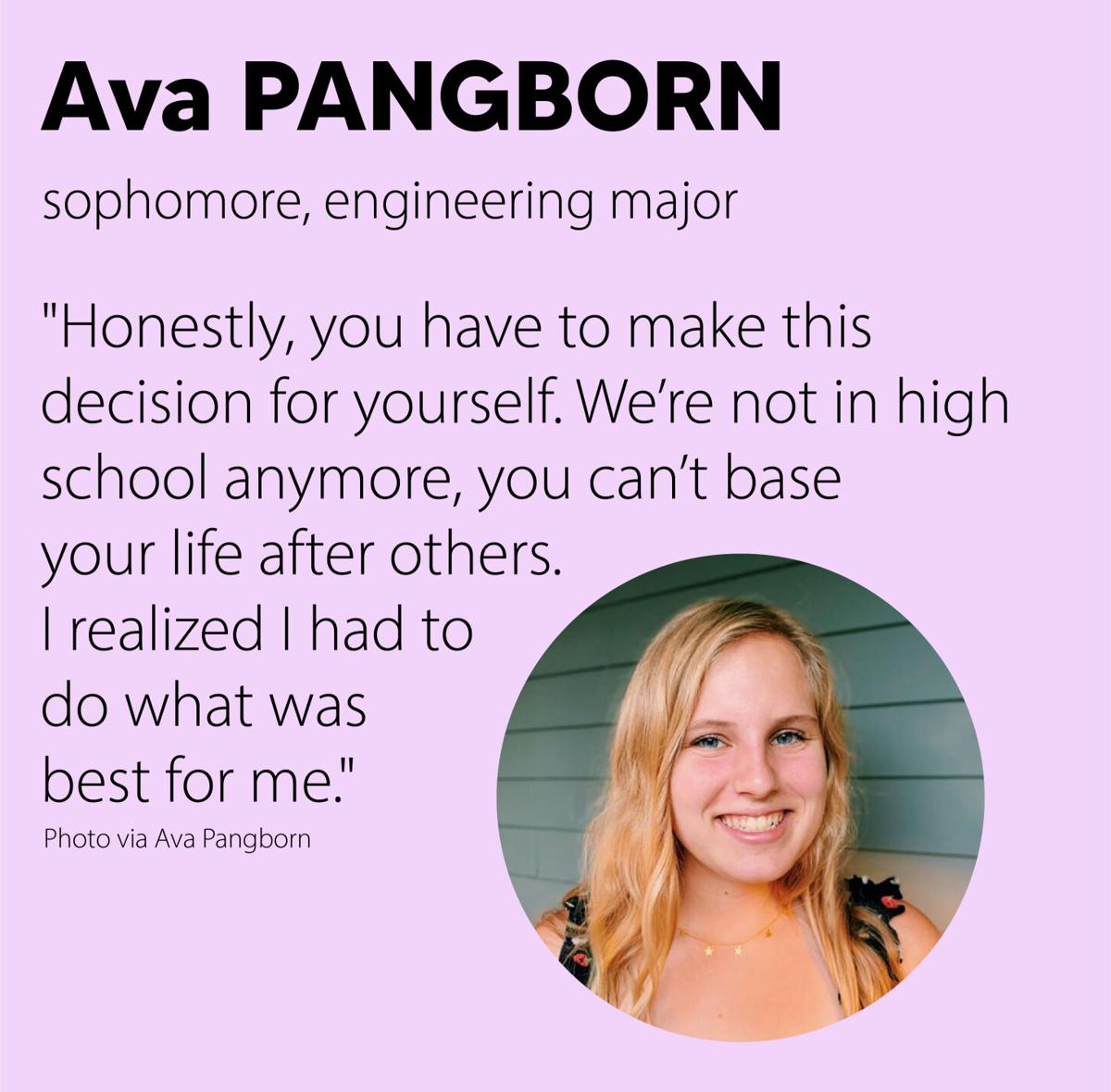 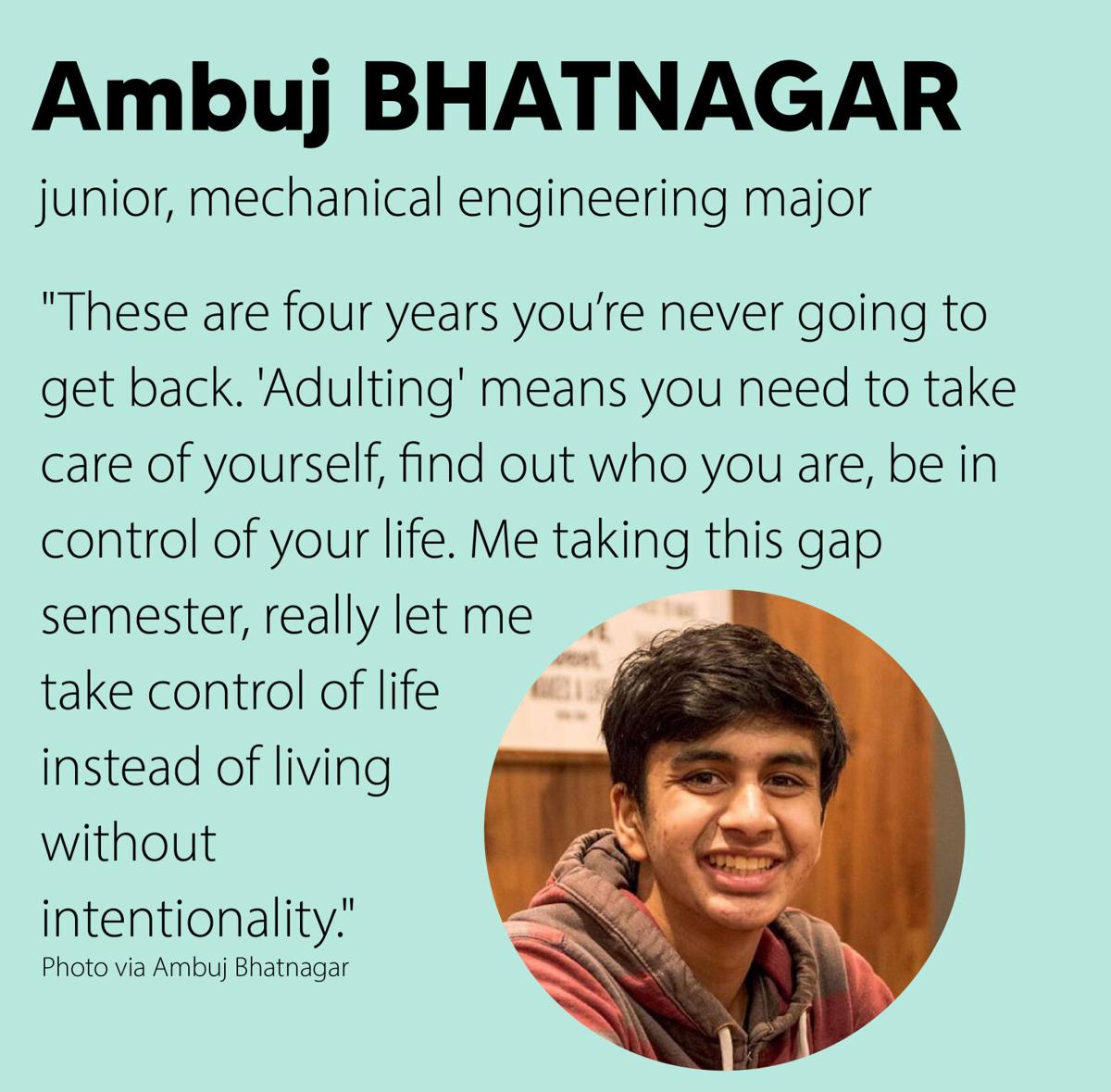 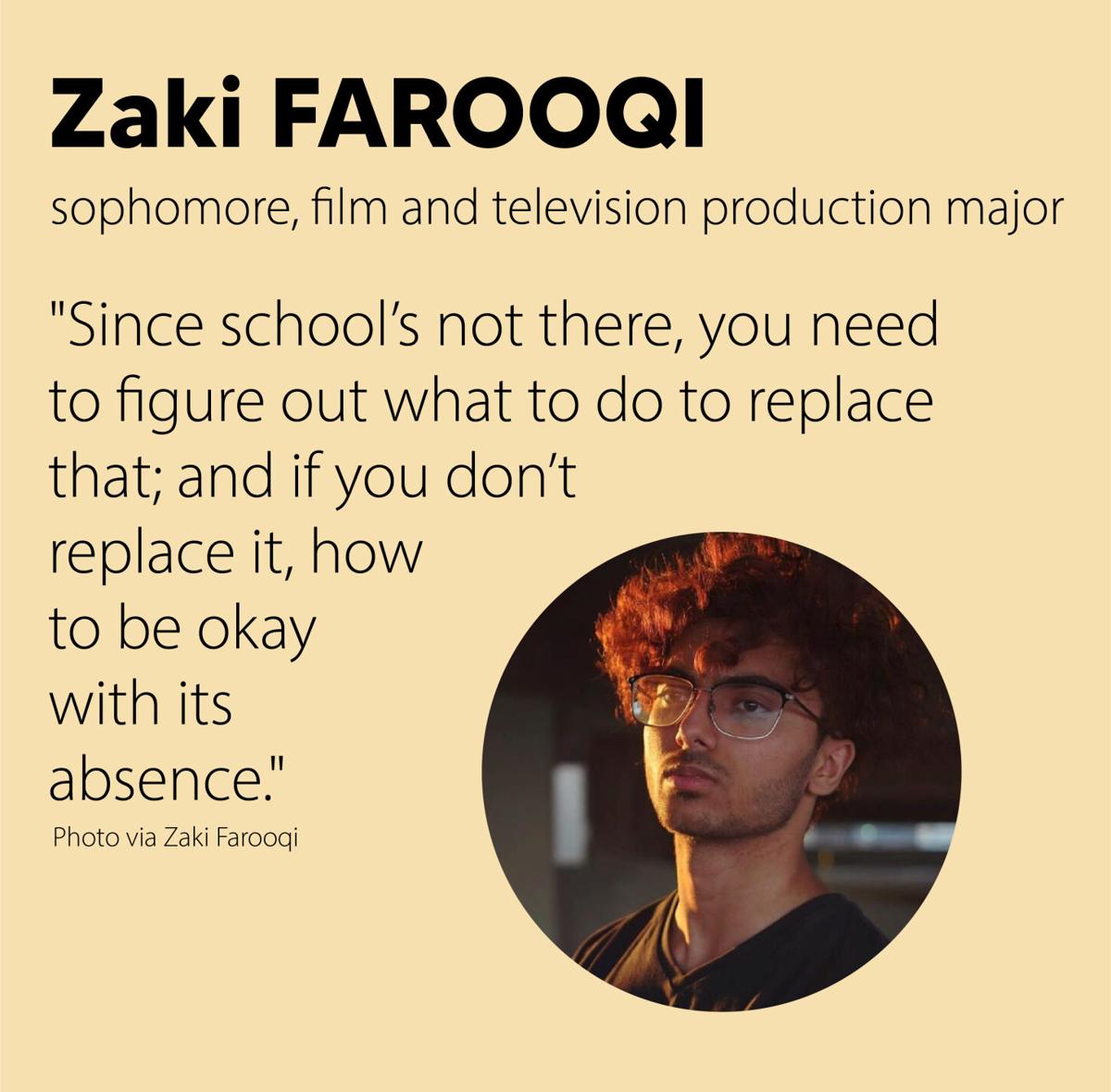 As online school became an inevitability at the turn of summer 2020, many students were faced with the dilemma of another expensive semester sitting in front of a Zoom screen or the dicey alternative of taking a leave of absence. This week, the Loyolan interviewed some of these students, learning about their lives away from the virtual Bluff. Below, read reflections from Zaki Farooqi, a sophomore film and television production major, Ambuj Bhatnagar, a junior mechanical engineering major, and Ava Pangborn, a sophomore engineering major.

Alexis SooHoo (A.S.): Which semester did you take a leave of absence and why?

Zaki Farooqi (Z.F.): I took my sophomore year off, so the 2020 to 2021 academic year. I took the whole year off because as an SFTV major, there is a lot of value in being on campus. You’re constantly networking and working on miscellaneous projects, all stuff that I would miss out on being online. This way, I still get my four years of college the way I planned it, even if it is a year late.

Ambuj Bhatnagar (A.B.): I was on leave last semester, just for fall 2020. I took the leave of absence to get out of my head and figure some things out for myself.

Ava Pangborn (A.P.): This current spring semester is the one I’m taking off. I was doing online school while living in L.A. last semester. My father passed away October 2019. With COVID hitting, online school and just dealing with grief, this semester has been a long time coming. I’ve never faced it.

A.S.: What are some of the goals or projects that you’ve worked towards during your leave of absence?

Z.F.: I’m a film editor, so I’ve been film editing, doing freelance work. I did a 2020 year in review for a producer at Disney Plus, Scott Stenholm. I’m also really into powerlifting, so I competed this last December. I’m now top 20 in my weight class in teams which is pretty cool. My favorite thing has been doing freelance video work in the fitness industry. I went to Colorado for a charity event called Lift Together; it’s crazy because I feel like the editing I do now is already far and beyond what I could do six months ago.

A.B.: I just kind of worked. I worked two jobs for a majority of the time, and during a small part I was working three. That was disgusting. My first two jobs were minimum wage jobs; the first one was an inventory associate and the other was a bookstore for a community college. I got a lot of time to read — I didn’t do it, but if I was feeling wild I’d open a book occasionally. The third was as a Python developer. I would load up the books after I had worked like 5 to 10 a.m., so it was strenuous. I’m technically still working there, but they're on a break right now. I also made money, so having money that wasn’t my parents' was super nice. I count that as a win. I feel like other people would be like, ‘Oh you didn’t have an internship,’ but I enjoyed my time.

A.P.: I’ve been more active. Taking walks and hikes, I have more free time. I had some personal goals for myself. My brother has Celiac disease, and my doctor thought I had an intolerance. So I did a diet in high school to see what it would be. When I reintroduced new food, I screwed it up. So right now I’ve been able to go back to that since I can cook for myself. With my dad’s death, I never really got to process it, and it was definitely something that I wanted to do with my family. I’ve been working on my grief, seeing a therapist. Since I finally don’t have school, it’s something that I’ve had time to focus on.

A.S.: How has it been creating a new daily routine outside the regular confines of school?

Z.F.: Obviously I have a lot more free time. If I’m on deadline and I have a project, it’s pretty similar to what I was doing at LMU. So I kind of just wake up whenever I want, work as much as I can and go to sleep.

A.B.: It was a big shift because I had to really be on top of my schedule. It’s not like I wasn’t like that in college. But it’s different because when you’re working, you can lose your job if you’re gone for a day. Not only did I have to show up, I had to keep my mental health and physical health as well, making sure I was getting everything done. During the weekdays my hours were crazy, so the times I didn’t spend working had to be managed really tight as well. I really got to work on myself, whereas I didn’t have time to do that while I was in university.

A.P.: I’ve been working as a nanny since I’ve been out of school. I pick the kids up early afternoon, hang out with them up until seven or eight. On the weekends I visit friends from high school; so I’ve been to Tuscon, Flagstaff and Tempe, seeing people who go to state schools. In the mornings I can go on hikes before I go to work. I decided to re-read the Harry Potter books, and it's been the first time since third grade. That turned out to be a really rewarding experience actually, just the chance to slow down for the first time in a really really long time.

A.S.: What emotional changes have you had to deal with since being on your leave of absence?

Z.F.: I’m a people person, I would say. So it’s hard seeing less people every day. And I really miss LMU, so that sucks. It seems like by the time you get to college, you have the flow of your life figured out, especially with respect to the balance between academia, work, hobbies and interests. But a lot of that hinges on having school in the first place, having a foundation for your productivity and the way you spend most of your time. But since school’s not there, you need to figure out what to do to replace that; and if you don’t replace it, how to be ok with its absence. It’s like a family member, someone that’s always there, and now they’ve left.

A.B.: My emotional changes have definitely been some big takeaways and life lessons. First, I definitely realized how important an education was. I thought I knew before, but I met a lot of people who couldn’t afford to go to college. It added a lot of perspective because they had those jobs because they had to support themselves somehow. I realized how valuable my time was, I felt like I was underpaid for how much time I spent there. I kept asking, ‘what am I getting out of this?’ I realized how tiring these jobs are, and it’s so humbling. I know I’m not going to be in those jobs my entire life. I’m in a major with a lot of job opportunities, and the people I met can’t say the same. I felt very happy about the position I was in, and I’m grateful for the opportunities I have.

A.P.: Definitely the lack of school stress has been nice; it feels like a weight has been lifted. Online school has been harder than in person because it has been so isolated. It’s nice when I’m talking to a friend and I don’t feel the stress of my time being limited because I don’t have to study for anything right now. It’s also been nice to grow and heal with my family. I feel like we can finally deal with these things together. l just love having time to do it without the stress of school, and I feel so much happier.

A.S.: If you were to do it all over again, would you still take the leave of absence? Would you recommend it to others?

Z.F.: I mean, these are definitely unique times. During a regular year, leaving means being out of sync with your classmates, missing them all grow together. But there wasn’t really any of that happening this year, so even if I had done absolutely nothing, it would be worth it just to have that fourth year back on campus. I guess I wouldn’t recommend it during normal times just because it takes away a year of your twenties. Unless you’re doing something really meaningful with your time, it’s important to embrace your role as a student.

A.B.: I think most university students should take a leave of absence. The best time is after you get out of high school. These are four years you’re never going to get back. My first two years were a lot. “Adulting” means you need to take care of yourself, find out who you are, be in control of your life. Me taking this gap semester really let me take control of life instead of living without intentionality. Because I had a lot more time to reflect, I was able to put myself on that path.

A.P.: I think it’s beneficial — it's hard to say because my circumstances led to this. Grieving my father’s loss. I lived in L.A. last semester and I felt so alone. It was one bad decision after the next. Initially I was just going to do online school from home, but I honestly think it wasn’t beneficial for my education. Honestly, you have to make this decision for yourself. We’re not in high school anymore, you can’t base your life after others. I realized I had to do what was best for me.