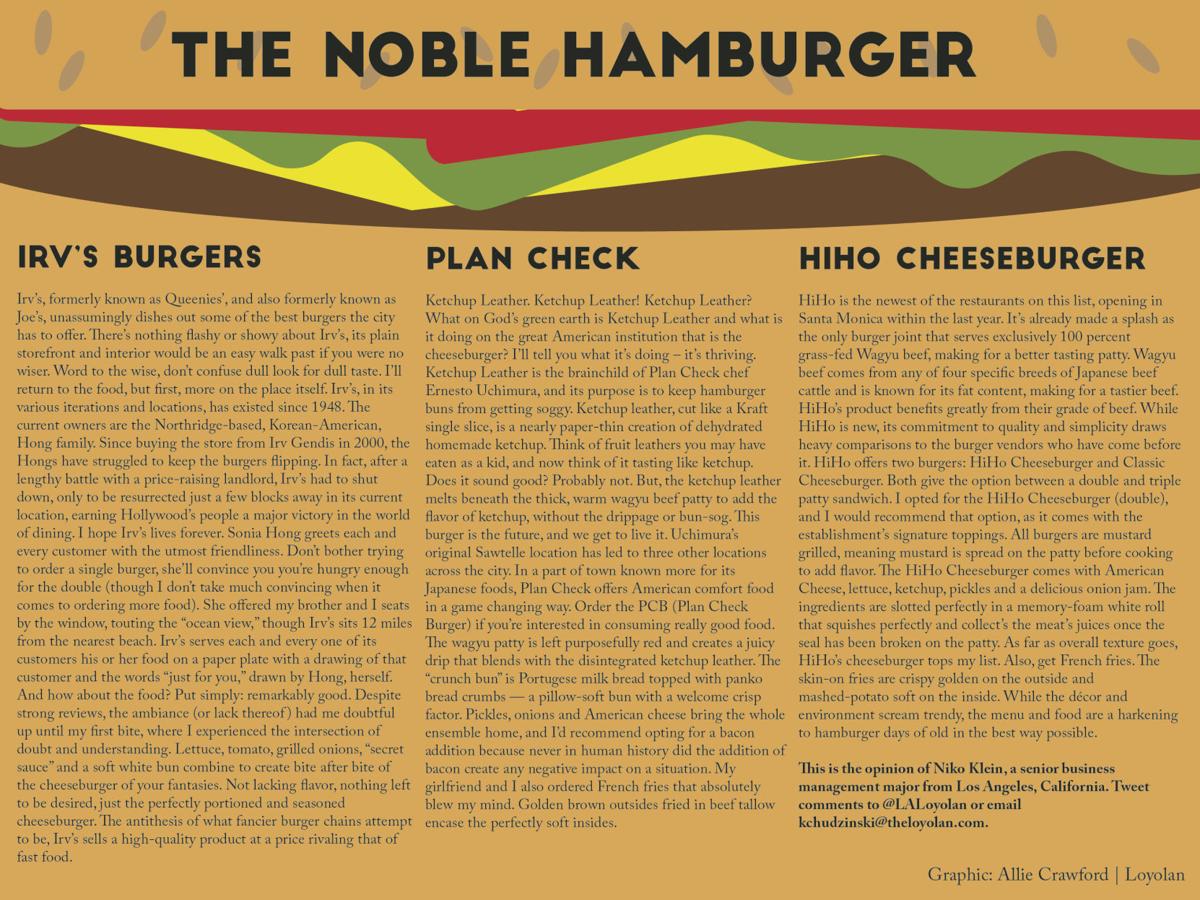 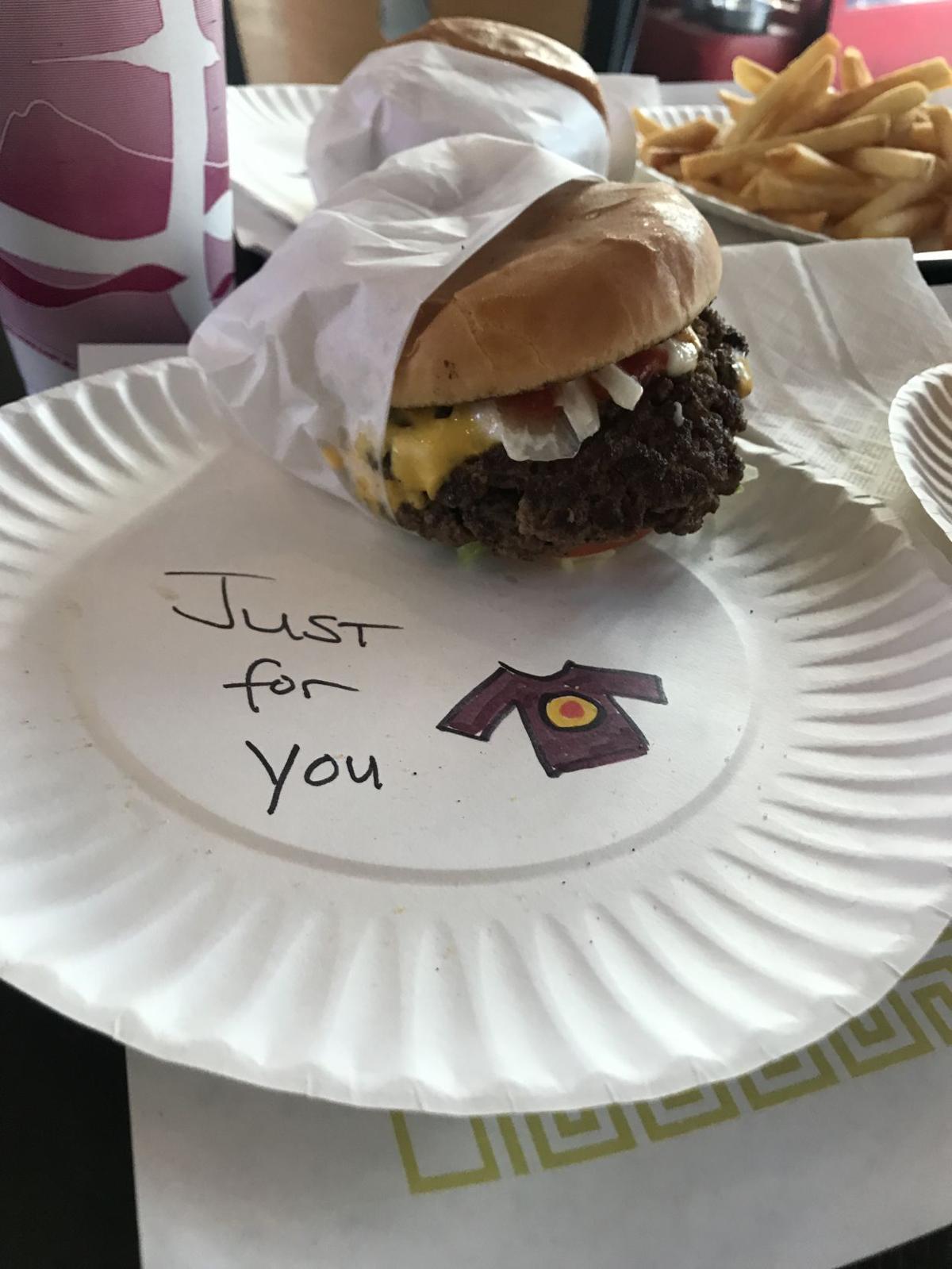 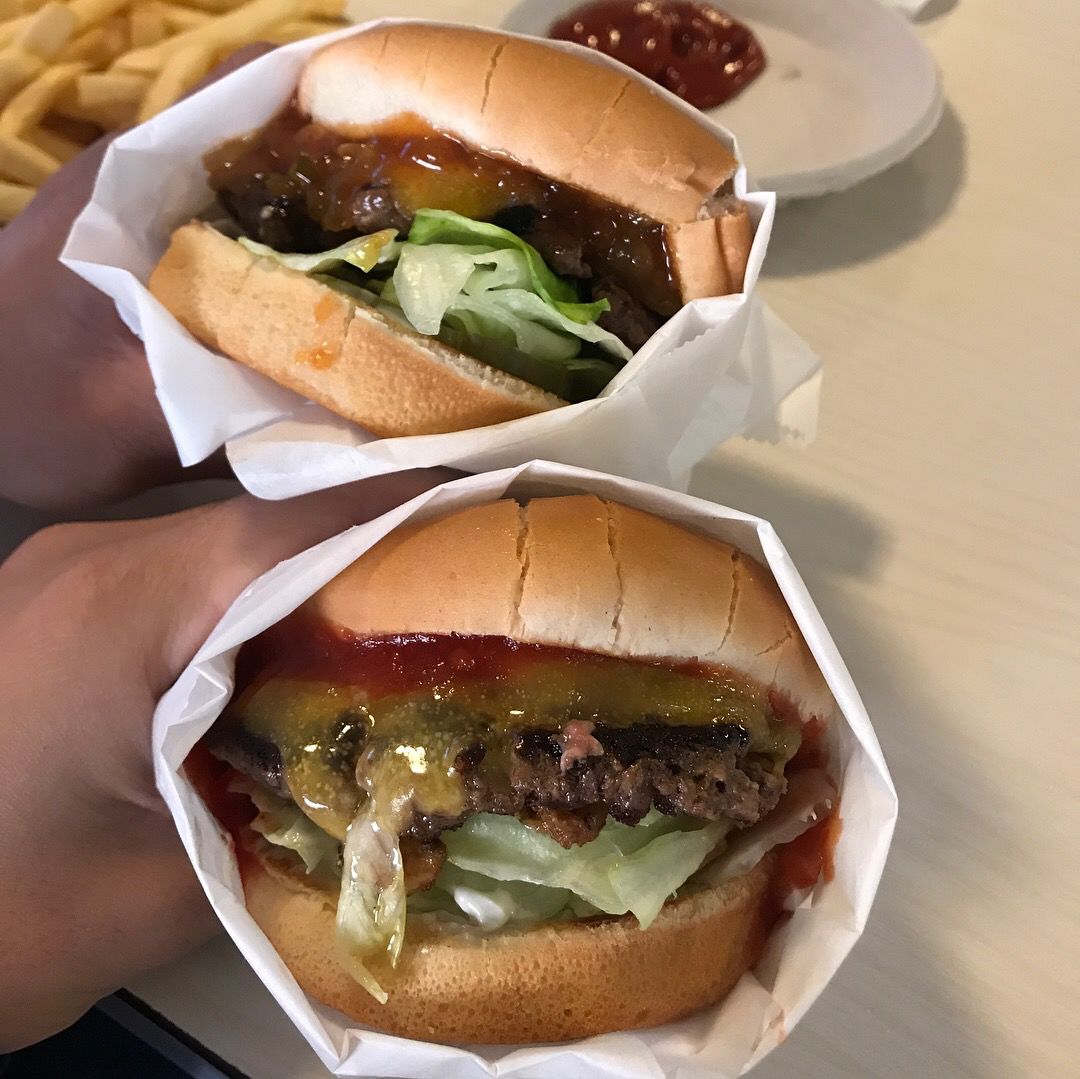 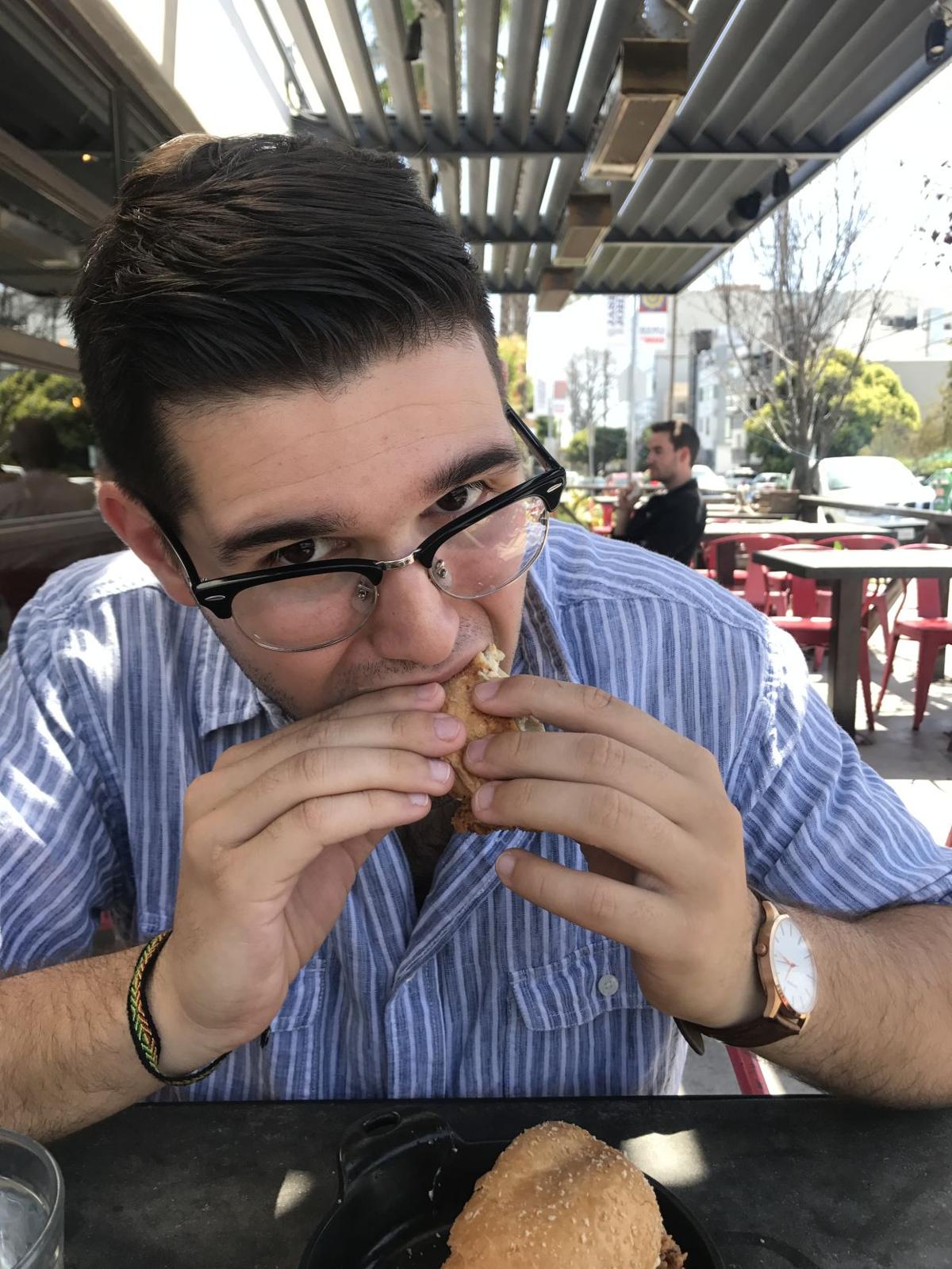 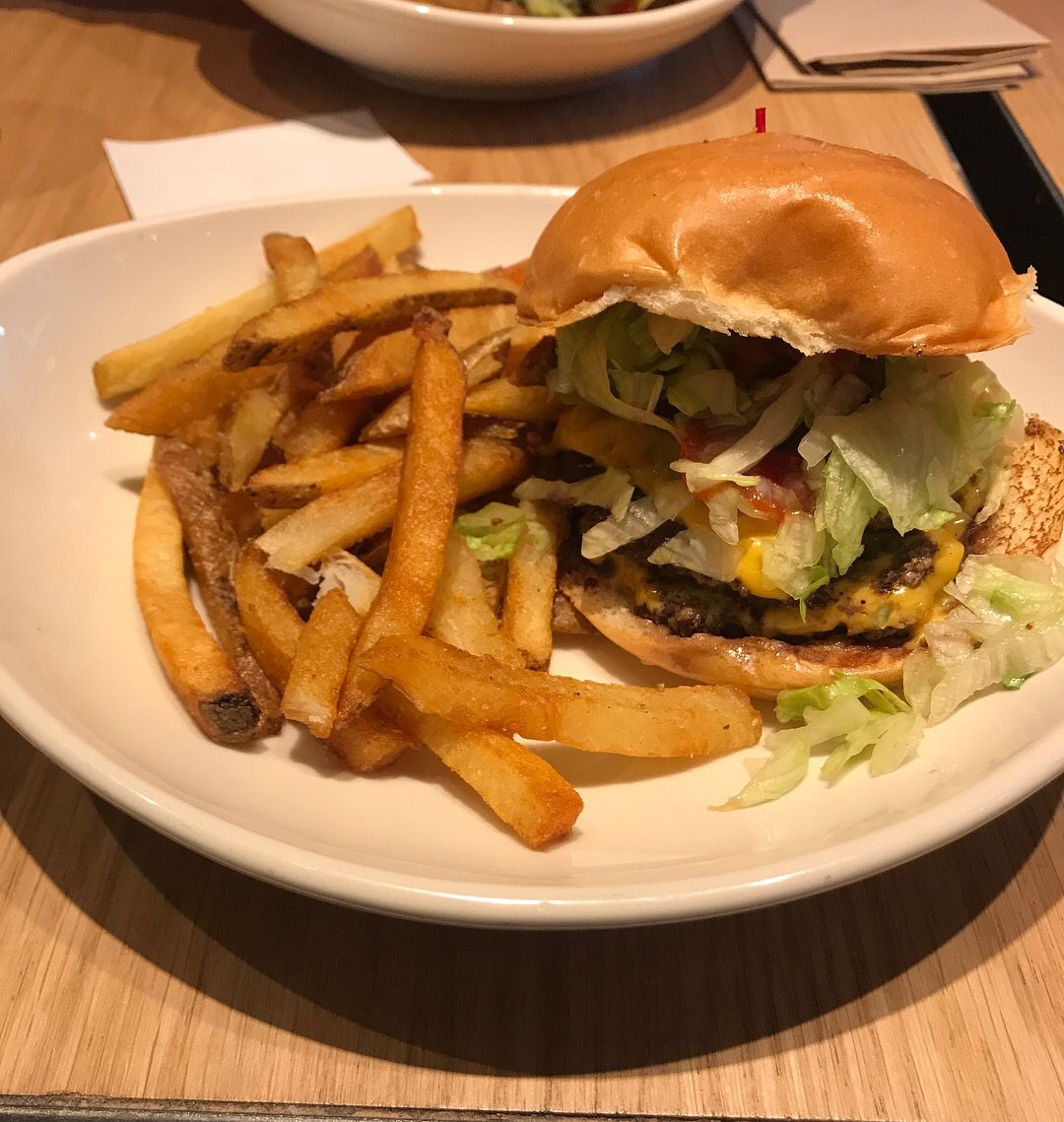 In my last issue, I discussed the simple hot-dog as an American staple. This week, we continue down the road of Americana and take a look into the hamburger, the hot-dog’s noble brother, who holds a very similar place in our past and present. While some simple nostalgia is no doubt involved in my choosing to write about L.A.'s rich hamburger history, there’s absolutely more at play regarding the story the sandwich tells.

Similar to hot-dogs, the hamburger’s history in our city tells a story of both World War II vets and immigrants. What do these two groups have in common? The quest for the American dream. As we know, Southern California became a hotbed for vets once the great war ended, with many seeking a suburban family life and opportunities allotted them by the G.I. Bill. This led to suburbanization and urban sprawl. Each little suburb from Hollywood to Westchester needed a burger stand (or a few) to cheaply feed its hungry families. In 1940’s Los Angeles, we saw the birth of McDonald’s in San Bernardino, In-n-Out in Baldwin Park, Fatburger in Exposition Park and Carl’s Drive-In (Carl’s Jr.) in Anaheim. These would go on to multi-locational success; however, in this same decade, we see the birth of some uniquely Los Angeles institutions that have garnered cult following for themselves including, but not limited to, The Apple Pan, Original Tommy’s and Irv’s Burgers. Here lies the common theme between war vets and immigrants: hamburgers provided a cheap, easy to quantity-cook, food option that was popular amongst a middle-class audience. Menus were kept simple, and in many cases, still are, as to create ease in buying and assembling ingredients.

But what is a hamburger, and where did they come from? We can trace the history of the hamburger to Hamburg, Germany and the popular “Hamburg Steak.” Similar to a Salisbury Steak, hamburger steak is a cheap beef option created from ground, chopped beef. The origin of sandwiching the ground beef patty is unknown and disputed, but many attribute food vendors at the 1904 St. Louis World’s Fair, where the sandwich was lauded as "the innovation of a food vendor on the pike.” There are so many variations on the burger, from toppings, to cooking styles, to types of bun. The meat can be grilled, charbroiled or pan fried. The bun can be toasted or not toasted. You can also choose to have cheese. Part of the burger’s popularity is its ability for individualization. As for me? I like the classic: lettuce, tomato, cheese, bacon, grilled onions and a special sauce. In this article, we’ll look at a 50/50 mix of classic burger stands and newer creations. This, in no way, is a full representation of L.A.'s burger landscape. Other incredible burgers include: In-n-Out, Pie ‘n Burger, Hopdoddy and more.

Irv’s, formerly known as Queenies’, and also formerly known as Joe’s, unassumingly dishes out some of the best burgers the city has to offer. There’s nothing flashy or showy about Irv’s, its plain storefront and interior would be an easy walk past if you were no wiser. Word to the wise, don’t confuse dull look for dull taste. I’ll return to the food, but first, more on the place itself. Irv’s, in its various iterations and locations, has existed since 1948. The current owners are the Northridge-based, Korean-American, Hong family. Since buying the store from Irv Gendis in 2000, the Hongs have struggled to keep the burgers flipping. In fact, after a lengthy battle with a price-raising landlord, Irv’s had to shut down, only to be resurrected just a few blocks away in its current location, earning Hollywood’s people a major victory in the world of dining. I hope Irv’s lives forever. Sonia Hong greets each and every customer with the utmost friendliness. Don’t bother trying to order a single burger, she’ll convince you you’re hungry enough for the double (though I don’t take much convincing when it comes to ordering more food). She offered my brother and I seats by the window, touting the “ocean view,” though Irv’s sits 12 miles from the nearest beach. Irv’s serves each and every one of its customers his or her food on a paper plate with a drawing of that customer and the words “just for you,” drawn by Hong, herself. And how about the food? Put simply: remarkably good. Despite strong reviews, the ambiance (or lack thereof) had me doubtful up until my first bite, where I experienced the intersection of doubt and understanding. Lettuce, tomato, grilled onions, “secret sauce” and a soft white bun combine to create bite after bite of the cheeseburger of your fantasies. Not lacking flavor, nothing left to be desired, just the perfectly portioned and seasoned cheeseburger. The antithesis of what fancier burger chains attempt to be, Irv’s sells a high-quality product at a price rivaling that of fast food.

The Apple Pan has few rivals in regard to looking out of place. A quaint little one-story with no more than 20 counter seats, Apple Pan has been dwarfed by a parking structure and a mega-mall in the decades since its 1947 opening, yet there she still stands on Pico with the slogan “quality forever.” Apple Pan boasts a proud history of continuous location and operation since its inception. Apple Pan is simple, fair and famous for its burgers and pies. The restaurant creates a unique dining experience with its u-shaped lunch counter that encompasses an open kitchen, leaving only a moat-like area for a waiter to wander through to take orders and serve drinks. Is the older counter man stressed while he takes orders and administers food and checks? No, he’s positively unfazed. He’s not frantic. In fact, he stops to pour you ketchup before you even think to reach for the ketchup. How’d he know I wanted ketchup? I’ve been going to Apple Pan for a long time, and I still recognize staff every time I come in, with many Apple Pan employees slinging burgers for decades. Typical of many old burger joints, Apple Pan still offers customers a straight-to-the-point menu. There’s two burgers to choose from, Hickory or Steak. I went Hickory, while my pal Kashi went steak. An order of fries is always an important addition (anyone else feel weird eating a burger without French fries?). The main difference between the burgers is the Hickory burger comes with a house-made Hickory sauce that’s tart, sweet and sticky and somewhere between ketchup and barbecue sauce. I highly recommend the Hickory when encountering your hamburger choice. On neither burger will you find a tomato, by rule of the Apple Pan, but you will find a wad of lettuce head, adding an extra crunch to the existing crunches of the charred beef patty and the toasted bun. You can add a slice of Tillamook cheddar cheese, and you absolutely should add a slice of Tillamook cheddar cheese. Your hamburger is brought to you sans-plate, wrapped in paper with the edible side sticking up. Everything about the burger is calculated and time-tested, creating a tremendously delicious product. After quickly eating your burger, order a slice of pie. They’re known for apple and banana cream, and both are wonderful. Personally, I’ll opt for banana cream nine times out of 10. Try both, there’s no reason not to at those prices.

Ketchup Leather. Ketchup Leather! Ketchup Leather? What on God’s green earth is Ketchup Leather and what is it doing on the great American institution that is the cheeseburger? I’ll tell you what it’s doing – it’s thriving. Ketchup Leather is the brainchild of Plan Check chef Ernesto Uchimura, and its purpose is to keep hamburger buns from getting soggy. Ketchup leather, cut like a Kraft single slice, is a nearly paper-thin creation of dehydrated homemade ketchup. Think of fruit leathers you may have eaten as a kid, and now think of it tasting like ketchup. Does it sound good? Probably not. But, the ketchup leather melts beneath the thick, warm wagyu beef patty to add the flavor of ketchup, without the drippage or bun-sog. This burger is the future, and we get to live it. Uchimura’s original Sawtelle location has led to three other locations across the city. In a part of town known more for its Japanese foods, Plan Check offers American comfort food in a game changing way. Order the PCB (Plan Check Burger) if you’re interested in consuming really good food. The wagyu patty is left purposefully red and creates a juicy drip that blends with the disintegrated ketchup leather. The “crunch bun” is Portugese milk bread topped with panko bread crumbs — a pillow-soft bun with a welcome crisp factor. Pickles, onions and American cheese bring the whole ensemble home, and I’d recommend opting for a bacon addition because never in human history did the addition of bacon create any negative impact on a situation. My girlfriend and I also ordered French fries that absolutely blew my mind. Golden brown outsides fried in beef tallow encase the perfectly soft insides.

HiHo is the newest of the restaurants on this list, opening in Santa Monica within the last year. It’s already made a splash as the only burger joint that serves exclusively 100 percent grass-fed Wagyu beef, making for a better tasting patty. Wagyu beef comes from any of four specific breeds of Japanese beef cattle and is known for its fat content, making for a tastier beef. HiHo’s product benefits greatly from their grade of beef. While HiHo is new, its commitment to quality and simplicity draws heavy comparisons to the burger vendors who have come before it. HiHo offers two burgers: HiHo Cheeseburger and Classic Cheeseburger. Both give the option between a double and triple patty sandwich. I opted for the HiHo Cheeseburger (double), and I would recommend that option, as it comes with the establishment’s signature toppings. All burgers are mustard grilled, meaning mustard is spread on the patty before cooking to add flavor. The HiHo Cheeseburger comes with American Cheese, lettuce, ketchup, pickles and a delicious onion jam. The ingredients are slotted perfectly in a memory-foam white roll that squishes perfectly and collect’s the meat’s juices once the seal has been broken on the patty. As far as overall texture goes, HiHo’s cheeseburger tops my list. Also, get French fries. The skin-on fries are crispy golden on the outside and mashed-potato soft on the inside. While the décor and environment scream trendy, the menu and food are a harkening to hamburger days of old in the best way possible.

This is the opinion of Niko Klein, a senior business management major from Los Angeles, California. Tweet comments to @LALoyolan or email kchudzinski@theloyolan.com.