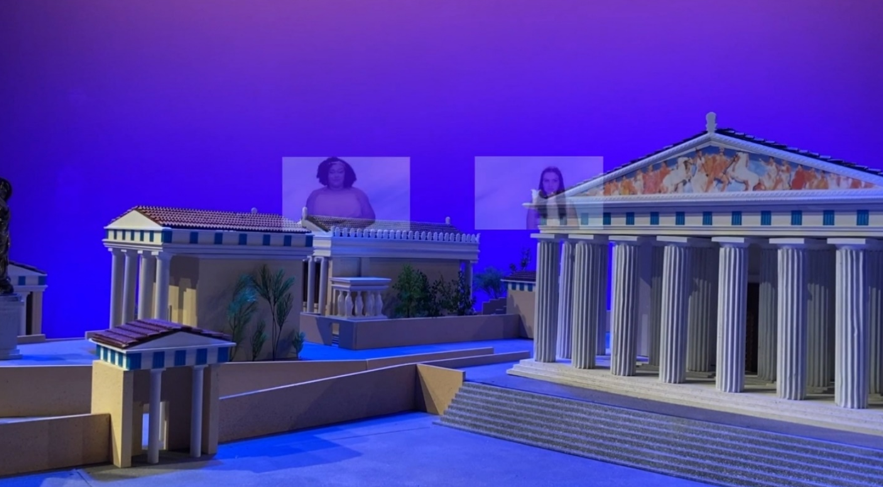 Over 100 of the Theatre Department's stagecraft students along with faculty and staff worked together to create a large to-scale set of the Greek pantheon and housed them with puppets that would enact the physical motions of the characters. 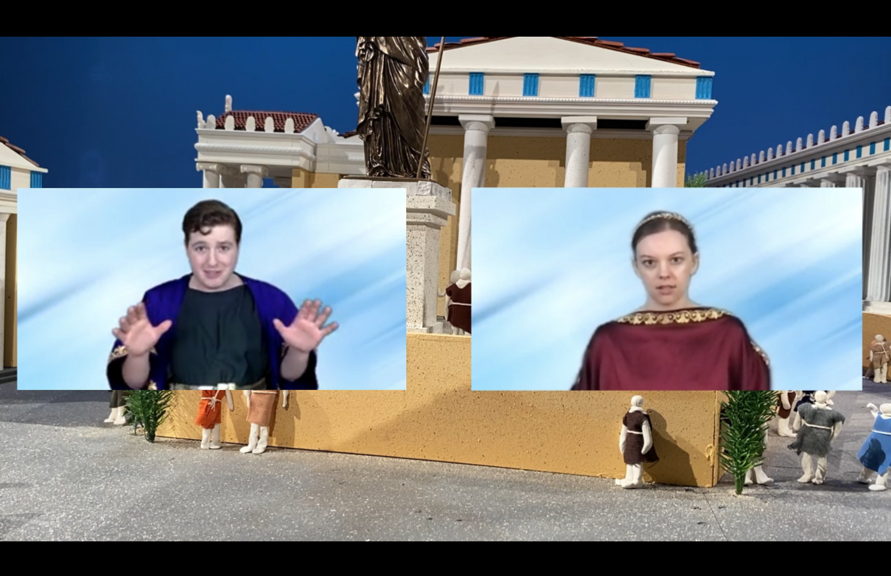 Lysistrata confronts the Magistrate during their holdout in order to negotiate demands for peace.

Over 100 of the Theatre Department's stagecraft students along with faculty and staff worked together to create a large to-scale set of the Greek pantheon and housed them with puppets that would enact the physical motions of the characters.

Lysistrata confronts the Magistrate during their holdout in order to negotiate demands for peace.

“Lysistrata” is a comedic play adapted by Ellen McLaughlin. Freely adapted from the play of the same name by Aristophanes, it features a woman named Lysistrata who convinces all the women of Athens to help stop the Peloponnesian War in 411 B.C. by having the women of both sides refuse to have sex with their partners until a peace treaty is signed. From Nov. 11-13, “Lysistrata” was directed by Katharine Noon, chair and professor of theatre arts at LMU.

The show itself was a multimedia performance featuring Zoom technology and stop motion animation. It featured hundreds of puppets to simulate a model of the Pantheon that took up an entire stage on the LMU campus, while performers were in their Zoom boxes floating above the stage. The stage and assets were created and assembled by faculty and staff of the LMU Theatre Arts Department and students of the stagecraft class.

Sammi Su (S.S.): How did this show and/or its message impact you?

Kennedy Smith (K.S.): Personally, I'm very grateful for this show and this cast and being able to be a part of something, even though I feel like the world’s kind of ending with COVID and this is an election year … This was something that kept me sane and grounded and reminded me why I’m at LMU in a sense [by] just getting to focus on my art. And in it, I got to meet so many amazing people and tell a really powerful story to uplift women.

Riley Jones (R.J.): Sophomore year, I actually had to read "Lysistrata," the original by Aristophanes for our Western theatre history class, and the original was actually a comedy only because all the parts that are women in it are played by men because women weren't allowed in theatre … When I heard that it was an adaptation where it was like women are actually funny, I realized I [wanted] to be a part of it. It’s funny because women are funny. We don’t need men playing these roles to be the funny part.

Lindsay Howard (L.H.): For me, I was texting [Technical Director of the theatre arts department Jason Sheppard] about it at the end of last year, because I wanted to do something with stage managing even if we weren't gonna be on campus. While a lot of shows that LMU [do] have those underlying messages, I think taking Ancient Greek comedy and transforming it into something modern—especially doing it over Zoom—just says a lot about how the world is changing. Also, having an all-female director and stage managing team was really fun.

S.S.: What was your greatest challenge during this experience?

L.H.: Scheduling over Zoom is very difficult, and a majority of my position was scheduling and making sure rehearsals and production meetings were at the right time, and everyone just happens to have classes and weird schedules. So, it was very difficult to actually schedule everything out so that we could have a show.

Jake Zingg (J.Z.): This was the first show that I did from starting the process on Zoom and ending the process on Zoom, from beginning to end. Starting the process, it's different because I didn’t have time in-person with these people to build a character and adapt it to Zoom … A lot of times, it just feels like you’re just throwing energy out into the void, and that takes more energy. One specific challenge was in my apartment, [as] my character yells a lot. I received multiple sound complaints and eventually, I started doing the show in one of my castmate's apartments (we were both COVID-tested every week).

Ivy Musgrove (I.M.): I haven't really played that many characters that [have similar values and beliefs as me]. I’ve mostly played really over the top crazy characters; I'm more of a character actor, so that was kind of a challenge for me a little bit to bring it down and keep it grounded in reality. I hardly had any experience playing people that I was remotely close to or had shared anything in common with … it wasn’t a part that I’m extremely comfortable playing so I just kind of had to get out of my head a little bit.

K.S.: I'm a very extroverted person, so [I miss] not being around people, and you know [not being able to walk] back after rehearsals, those little things where I'm like, ‘Oh, I don't like this.’ Also, another thing is, I was working on another project for Theater in Color, so kind of having to balance my time and my priorities and my artistic energy was a lot.

Noah Bradley (N.B.): [Since we won’t have] any response [or] any reassurance [from the audience], you really have to be confident in what you're doing in order to make sure that this is executed. Because if you doubt yourself, then it's going to read that you're doubting yourself and it's going to take away from the performance.

S.S.: During the process, how much creative freedom did you have with your character/role?

J.Z.: Katharine, the director of the show, told us to go big with it and do something crazy and come in with ideas. So for the very first rehearsal I was called to, I came in with a Southern accent for my character … Obviously, it didn't stick with the accent, [but] it still informed parts of the character.

R.J.: Katharine is just such an amazing director. Every single day, she wants us to find a different way to enter — whether it was like falling into screen or jumping off the bed or weirdly coming up from the bottom of the screen ... [Katharine] allows you to keep playing with how you do things, but also feel like you’re creating your character as well.

I.M.: I personally felt like I had a lot of room to explore my character … Everyone else around her is kind of going a little bit ham, but she’s more focused and has a goal and is trying to accomplish it. Katharine was just such an amazing director that she would give me little tweaks and notes but she would never be like, “That choice wasn’t good,” or like “That was wrong.” I didn’t know anyone in the cast so I was just really grateful that she was the person guiding.

N.B.: I basically had full reign to do whatever I wanted. [Katharine] pushed us to do more and go bigger and I loved that. I loved having the bigger than life idea, especially on this Zoom platform where everything feels so mundane. It feels fun to step away from myself and allow [things] to be crazy and stupid. [Katharine] has always been good at fostering people's ideas and making a safe space to make people feel safe to try new things and be themselves and to bring themselves into their roles as well.

Sammi Su is a junior marketing and Asian and Pacific Studies dual major from West Covina, CA. In her free time, she loves exploring new food spots and making videos with friends.