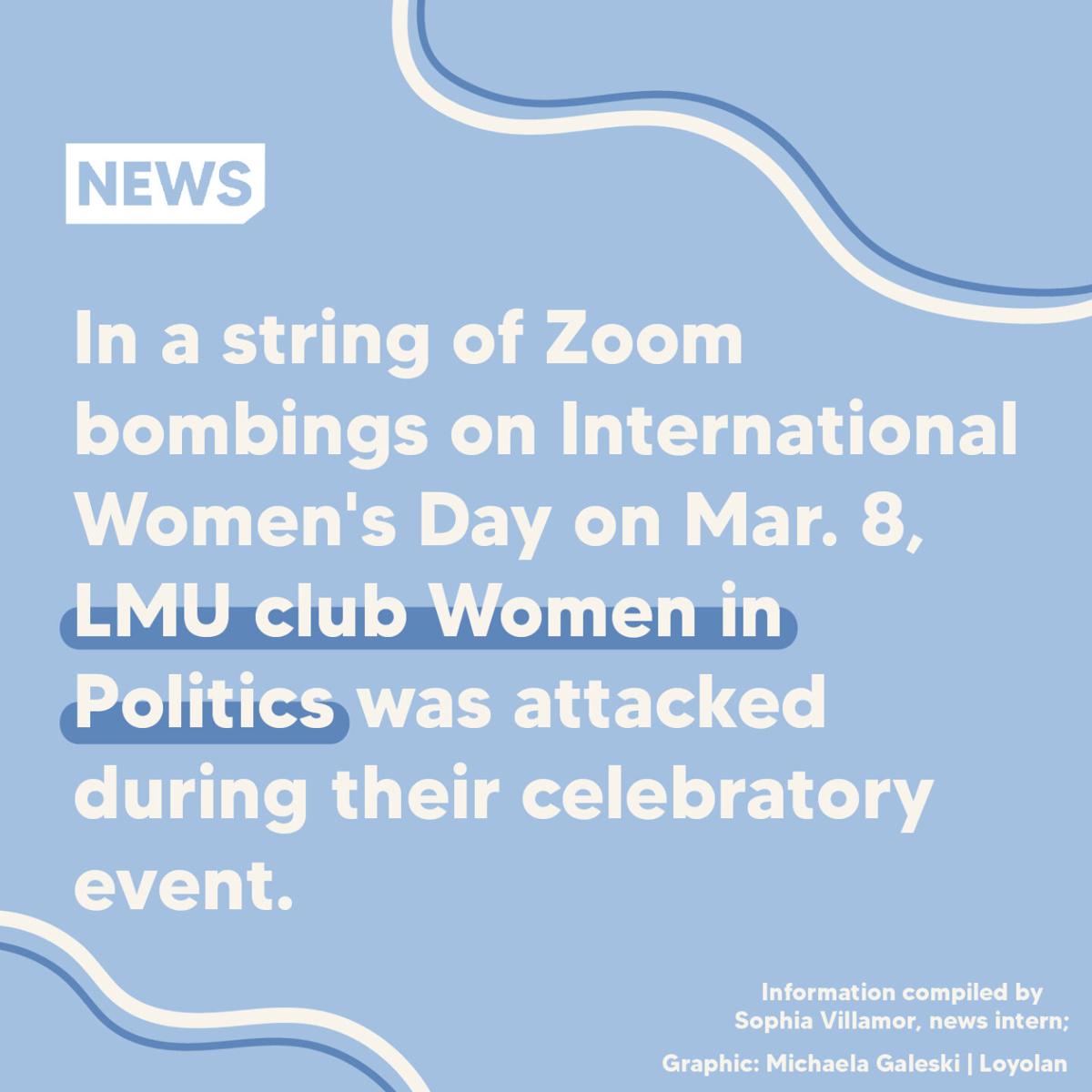 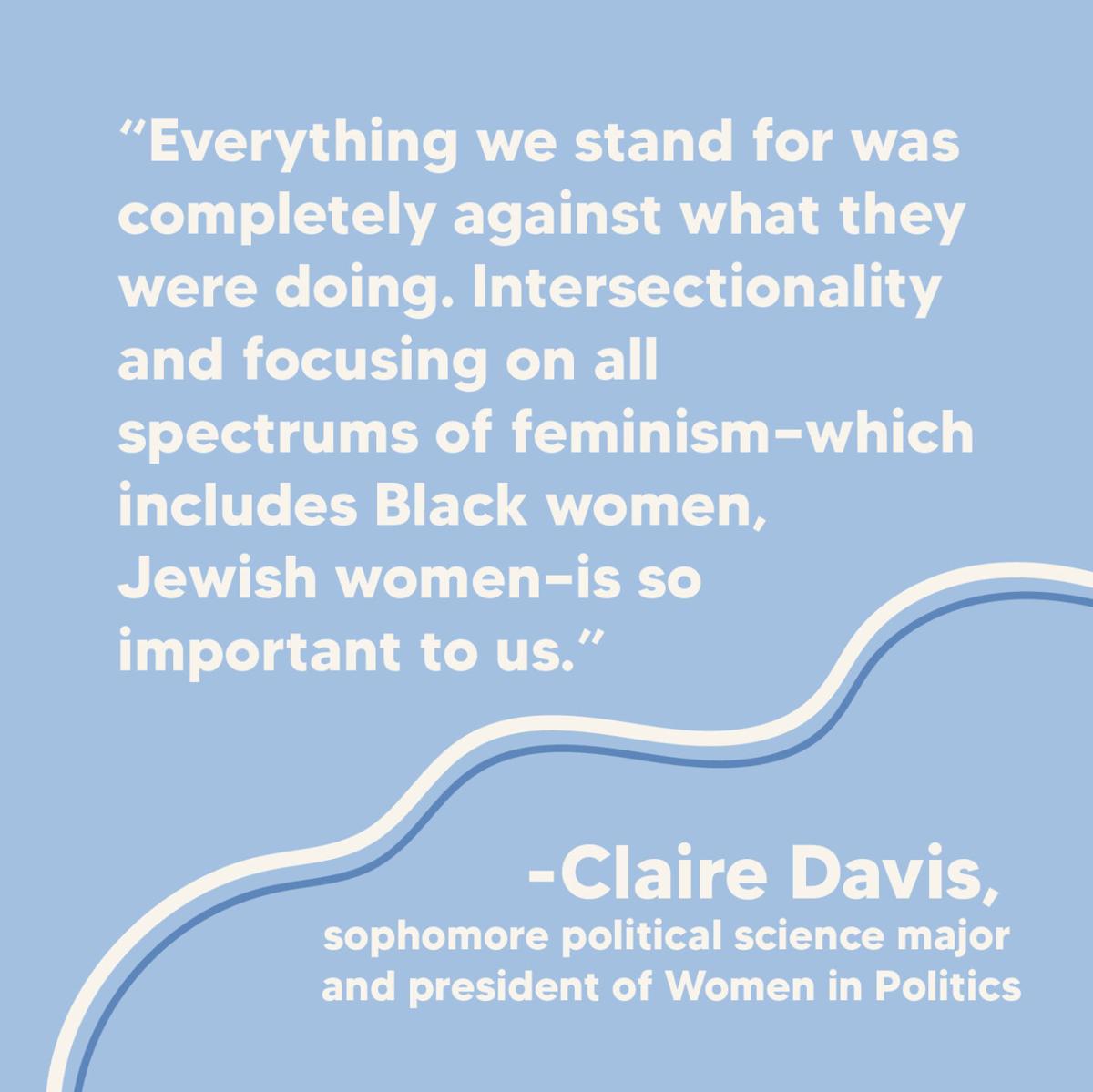 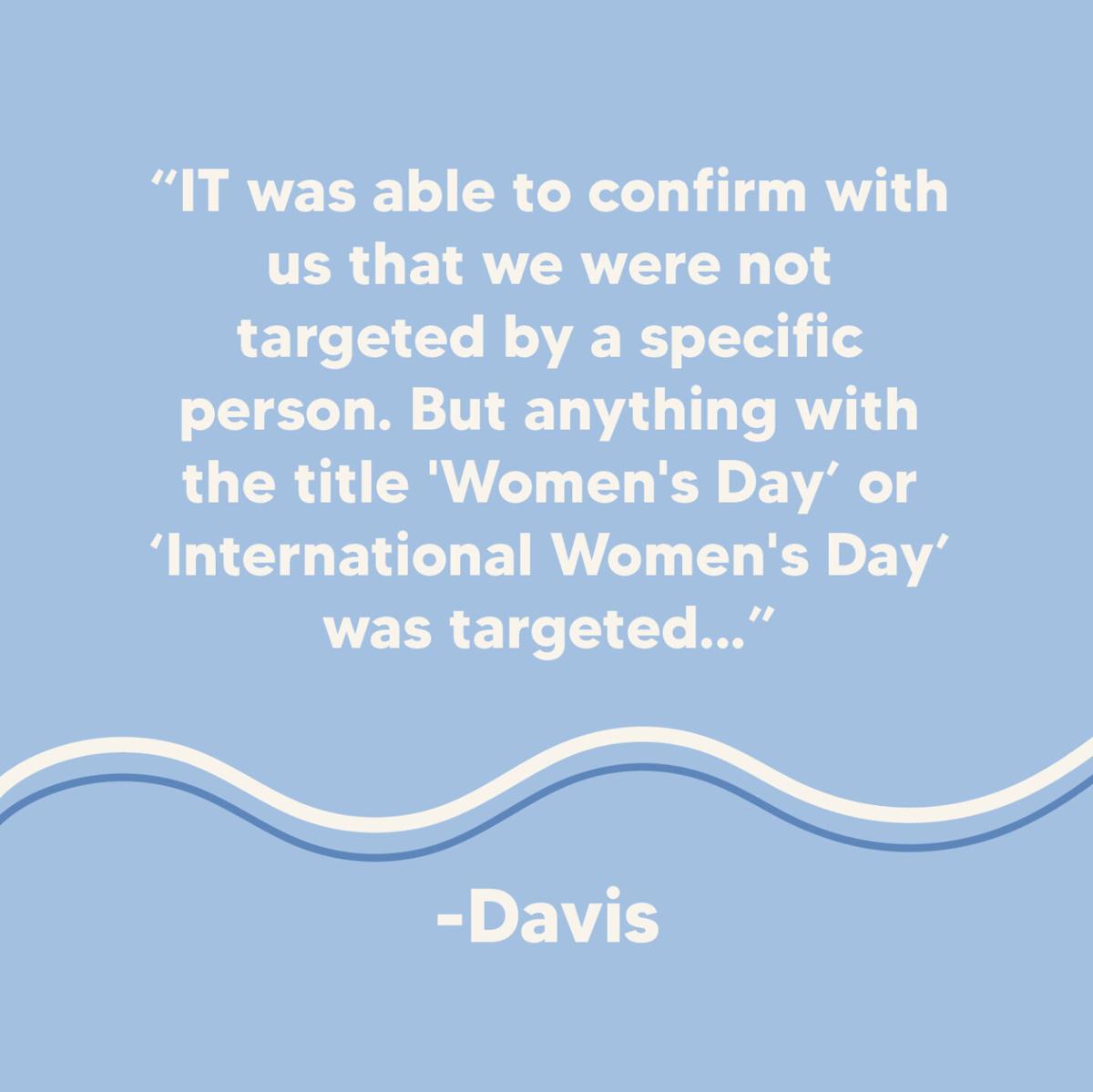 “I think women are so often silenced, and even when they’re not silenced, their voices are often suppressed and I wanted them to have a space where they could feel free to shout their opinions from the rooftops,” said Davis.

However, the safe space that they had worked tirelessly to create for their 32 members was disrupted by a Zoom bomber on March 8 during an International Women's Day event.

Zoom bombing is a widespread issue plaguing events on Zoom. These unwanted guests will take control of a Zoom meeting they are unaffiliated with and often share inappropriate content. LMU faced a string of Zoom Bombings last March after transitioning to online learning.

“[International Women’s Day] was probably our most advertised event we’ve done so far that was open to the LMU community. So it was on LEO and then it was advertised by a few other Instagram pages from LMU,” said Davis. “It was an open event which we hadn’t done before ... Everyone had invited their family and friends.”

The event was running smoothly, until the event organizers received a message in the Zoom’s chat from a participant that requested their ‘daughter’ be let into the meeting from the waiting room. Davis allowed them entrance.

The shared Kahoot screen was soon flooded with notations made through Zoom’s annotation feature, which allows users to draw on a shared screen. Racial slurs began to fill users’ screens. The attacker then used the whiteboard function to draw a swastika and displayed graphic pornography.

Davis and Feldman were unable to stop the images from appearing as Davis’ security settings had been compromised. She ended the meeting abruptly.

“Everything we stand for was completely against what they were doing. Intersectionality and focusing on all spectrums of feminism—which includes Black women, Jewish women—is so important to us,” said Davis. “All of the sudden, too, we thought our members of color weren’t going to come back feeling comfortable, [that] was probably the worst part for us.”

Immediately after ending the meeting, Feldman reached out to LMU Information Technology Services (ITS) and the Department of Public Safety.

ITS met with Davis and Feldman and an additional Zoom representative to gather information about the incident and provide additional Zoom security information. Public Safety has been working with ITS and notified the FBI of the attack.

While Davis and Feldman received an outpouring of support from campus resources, they were disturbed by the thought that the attack had come from a fellow LMU student.

“We thought that someone was out to get us. And as a new club with a bunch of young women who are eventually going to be on campus, that was horrifying,” said Davis.

ITS, however, posits that the source of the attack was likely not a member of the LMU community, as the Zoom Bomber was not logged into an LMU account at the time of the incident.

“The waiting room is the first line of defense against Zoom bombers since, by default, it prevents any user who is not logged into an LMU account from directly joining the meeting,” wrote LMU IT Director of Creative & Technology Support Matt Frank. “If a user is hosting a meeting which will be open to non-LMU participants, it is important that the host of that meeting implement additional security settings.”

Public Safety declined to comment on any findings of their ongoing investigation, though Public Safety Communications Manager Christina Gustafson wrote that Zoom bombing attacks of this nature “are not limited to LMU.”

“Public Safety has worked in close partnership with ITS and the FBI to gather, organize, and analyze information coming from the investigation, including everything from the attendee list and IP addresses, to the full recording of the meeting, and statements and interviews from the meeting attendees,” wrote Gustafson.

Feldman and Davis are confident that their attacker was not affiliated with LMU and, after doing research, found similar incidents were happening to other International Women’s Day events on Zoom.

A similar incident occurred during another International Women's Day Zoom event put on by a women’s resource center in Canada, where racial slurs and offensive images were displayed.

Although Feldman and Davis were horrified by the incident occurring on such a significant occasion for their organization, the two feel that the attack reflects the necessity of women’s rights advocacy.

“I feel like we all came back a lot closer and a lot more fired up. You know, [2020] was a super politically involved year and so you kind of lose momentum on these human rights movements … it gives you that little bit of fire you need,” said Davis.

Visit ITS’s website to read more about how to secure your organization’s Zoom meetings to prevent Zoom Bombing.