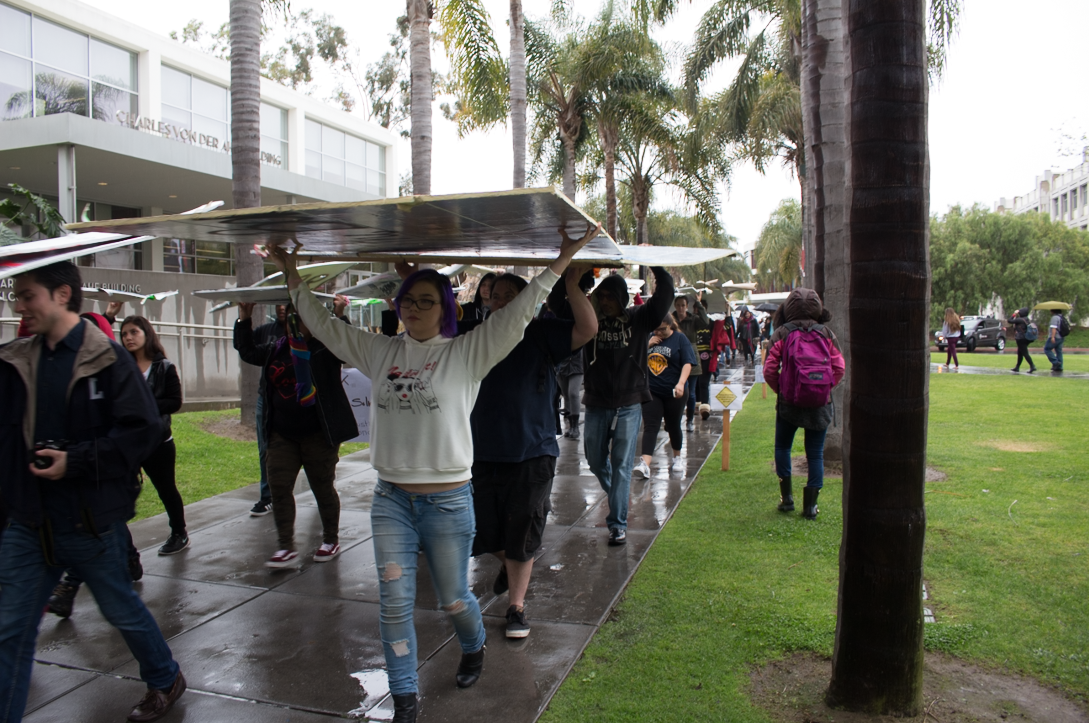 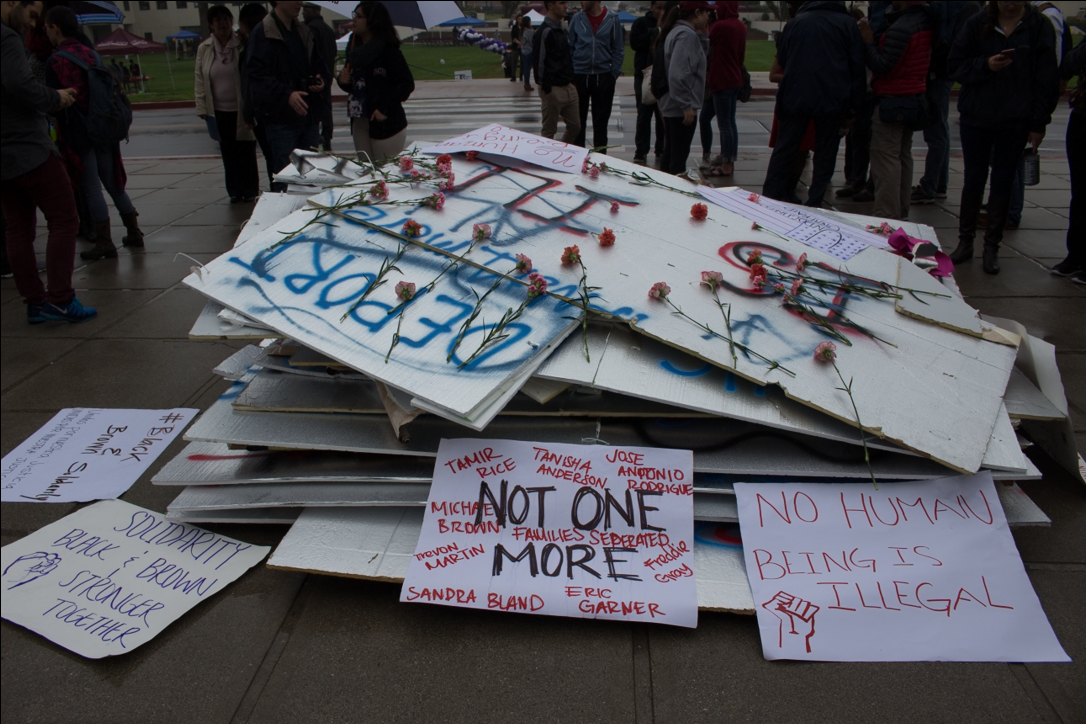 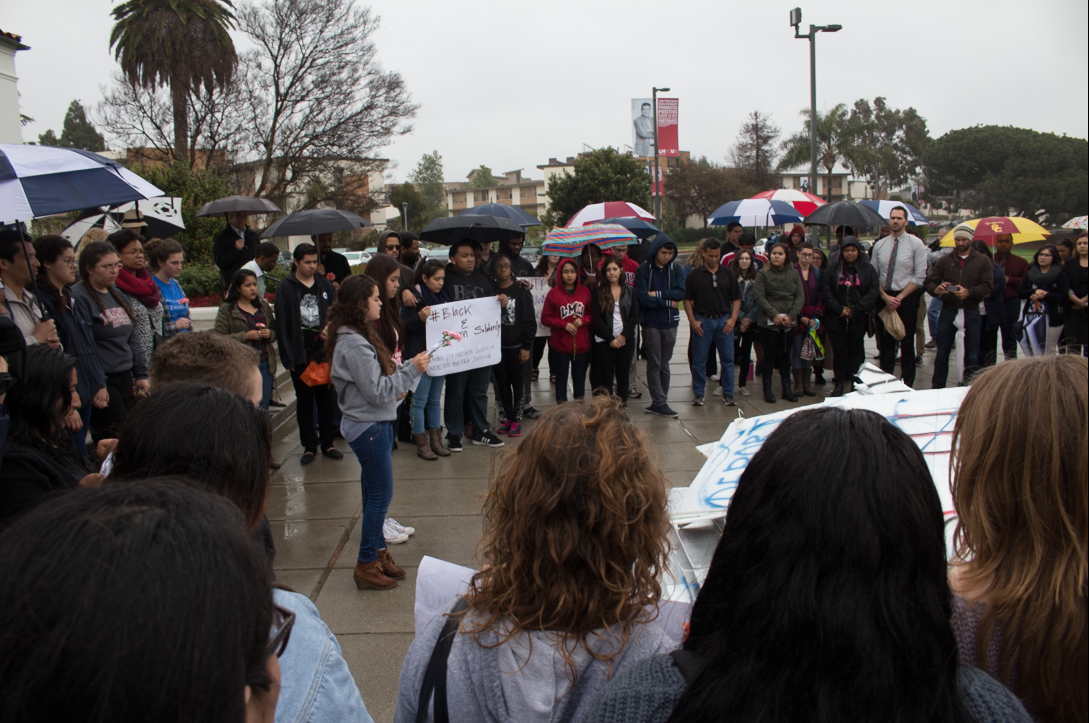 Diana Delgado shared a list of demands directed toward the University

The immigration wall defaced earlier this week was torn down at a solidarity rally part of No Human Being is Illegal Week on Friday. While the week may be over, those in attendance made it clear that their fight for this issue will not end here.

Members of the LMU community gathered at Sacred Heart Chapel, which was the start and end point of the procession.

President Timothy Law Snyder was among those in attendance. He shared his admiration for the actions taken to live out the University's focus on social justice.

"The challenge is that it takes an event like this to precipitate these kinds of conversations," said Snyder. "We've been having them across the year, but this is a time when we can focus."

Before the procession across campus began, students who helped organize the event expressed their beliefs that the rally is only the start of a campus-wide conversation.

Senior political science major Mauro Gomez, president of RESILIENCE, expressed his gratitude for the support from friends, classmates and faculty throughout the week.

"The intention of [this week] was to bring this issue on campus and let the students know who we are," he said.

The march began at Sacred Heart Chapel and continued around Sunken Garden, passing through Palm Walk, down to University Hall and along the bluff.

Attendees also carried signs, some reading "No Human Being is Illegal" and "#Not1More: Stop Deportations." They also chanted "Si se puede," "Unity" and "Love trumps hate" throughout the march.

The crowd came together again at the defaced wall, where they stood together and chanted "All walls fall." Senior modern languages major Diana Delgado, one of the week's organizers, shared a list of demands targeted toward the University.

Delgado requested that anti-racism and anti-bias workshops be established, that the University's next Provost be well-versed on issues related to biases and that enrollment of Hispanic students be increased by one percent every year moving forward.

"These demands are made with love for the institution," said Delgado.

Following the demands, those in attendance began to break down the wall, taking pieces back to Sacred Heart Chapel, where a prayer was read in Spanish and English.

ASLMU President David Tassone shared how proud he was of the LMU community for standing up for their beliefs.

"I'm just really proud of our students to come together for one issue. This has been a truly collaborative effort for everyone who is involved on campus."

"I'm just really happy that students are finally engaging in dialogue and doing so in a way that is active, where they feel that their voices could be heard," Nolen said. "I think that this is so symbolic of how much we have grown as a community, and making sure that our voices are heard."

Diana Delgado's mother, Irma Cornejo, was also in attendance, sharing how proud she is of the efforts her daughter has taken throughout the week.

"I think that this is an act of justice and it was necessary to do it," she said. "She's free to express her ideas, and her ideas are good and I support [them] all."

Amanda Lopez is a junior Marketing major in the M-School and a Journalism minor. She is from Chino Hills, California and has a huge obsession with Pinkberry. She loves puppies, going to concerts and re-watching The Office over and over again.

11 million people are more than a subset, Gary2278.
The problem is that Europeans and Americans have the right to free migration, with powerful passports that can take them almost anywhere in the world, but the rest of the world does not, for no other reason than that they were born in the wrong place. In a sense, saying that you are for legal immigration but against illegal immigration is being complicit in this system, which these activists have stated again and again is unfair.
As an international student, or a "legal immigrant", I am only a hair-sliver away from being undocumented, if I do not find employment in time after my graduation. We legal immigrants cannot help but stand in solidarity with these undocumented immigrants, because but for the stroke of luck, we would be exactly in their place. I spoke to one of these activists at the wall when she was dressed up as a prisoner and it was so powerful. I do not like that you are using me, a legal immigrant, as a tool to undermine the activists.
They are right. The immigration system is unjust. It is time for a change.

Nobody is against legal immigration; please understand that.

90% of the cocaine here comes through our southern border; 80% of the meth and heroin here comes through our southern border! If you think Trump, who continually says “I love Mexican people,” is a xenophobe because he wants to secure our southern border, you might be a gullible fool subject to exploiter-funded media influence. Trump's negative comments were targeted at a subset of illegal immigrants; NOT Mexicans! Illegal immigration is destroying our society (illegal immigrant children are almost always below grade level so teachers have to spend most of their time teaching at that level which hurts our children; illegal immigration keeps wages low; and the drugs from south of our border are ruining our children’s lives).