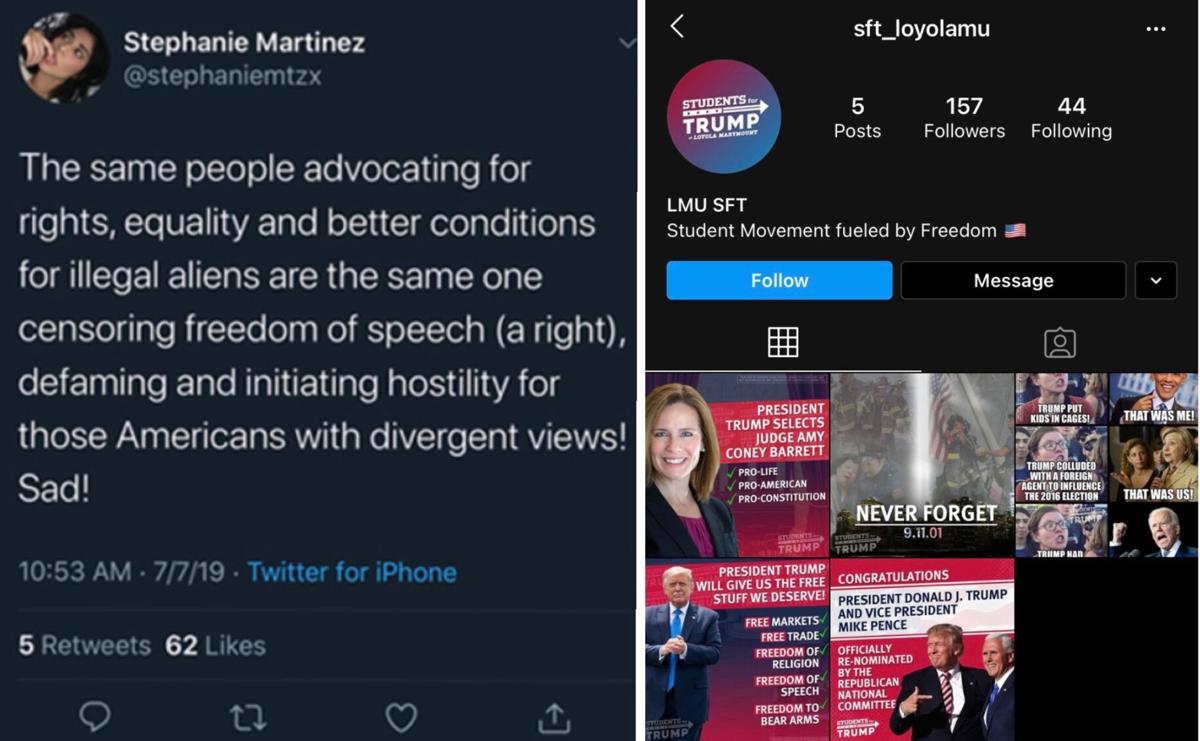 One of ASLMU senator Stephanie Martinez's controversial tweets regarding immigration, left, and the Instagram page she made for Trump-supporting students, right. 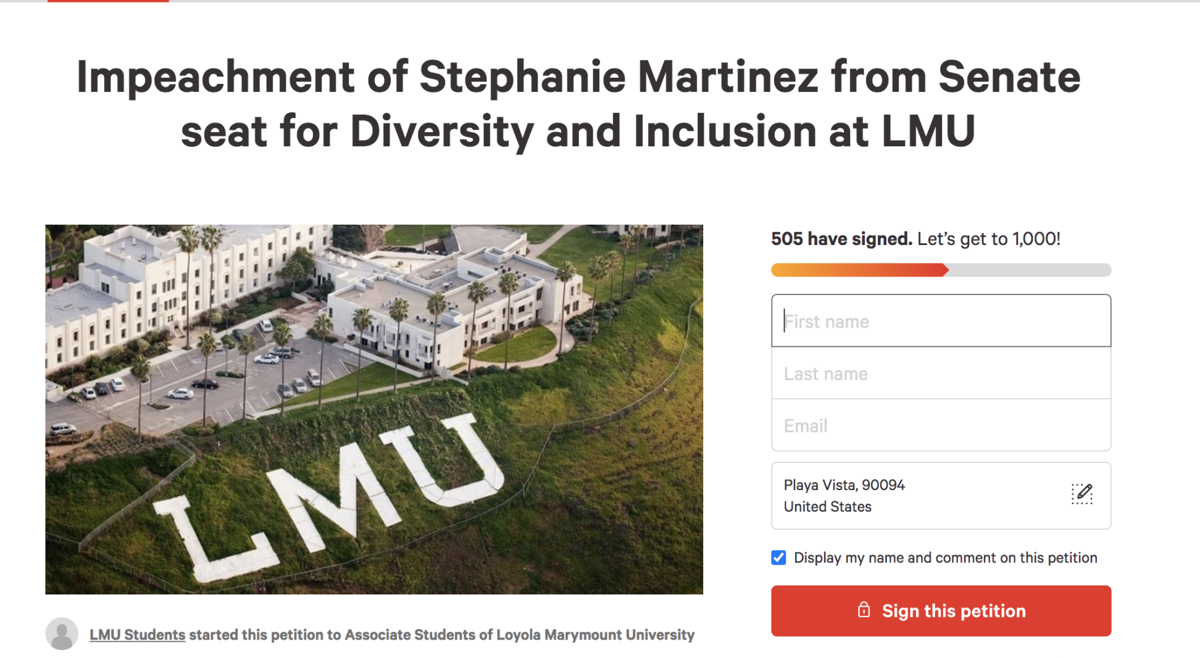 The online petition recirculating to impeach Martinez. As of Sept. 29, 505 people had signed.

A petition to impeach an ASLMU senator has resurfaced following the emergence of a students for Trump Instagram page. Stephanie Martinez, a junior political science major, serves as a ASLMU senator for diversity and inclusion for the 2020-2021 school year. She is one of three senators for diversity and inclusion, along with Camille Orozco and Isaac Hernandez. According to Martinez, she initially ran for the senate position to provide “more representation of Latinos on campus.”

In May 2020, past tweets from Martinez were uncovered by LMU student news publication Agency LMU. The tweets, which date back to July 2019, display derogatory language against undocumented immigrants.

One of Martinez’s tweets reads, “The same people advocating for the rights, equality, and better conditions for illegal aliens are the same one censoring freedom of speech (a right), defaming and initiating hostility for those Americans with divergent views! Sad!”

In response to an NPR article about Central American migrants being barred from applying for asylum at the United States southern border, Martinez tweeted, “Great!!! It’s about time!”

According to Martinez, her political orientation should not exclude her from the role of senator for diversity and inclusion. “My being conservative brings a healthy balance to the senate and I can help spread intellectual diversity on campus.”

Following Agency LMU’s article a Change.org petition emerged in an attempt to have Martinez removed from her position in the ASLMU senate. The petition, created by anonymous user “LMU Students,” says, “These tweets used derogatory and dehumanizing language about immigrants, supported detention centers and also threatened to call ICE in her tweets- this is a serious offense as we have undocumented students on campus.”

When asked about her initial reaction to the article and the petition Martinez said, “I knew Agency would fail to provide the full context of things, so I remained neutral. I know where I stand on things and why I do … I think the support I received from conservative LMU students aided me in staying afloat and strong.”

The petition, which has received 516 signatures as of Sept. 29, received a lot of traction in May but slowly died down after that.

“I can’t change the past nor will I dwell on it; it is all an experience. Everything happens for a reason … I am extremely appreciative for what happened, it fueled me to become more vocal and mobilized as a conservative Latina,” said Martinez.

However, when Martinez created the LMU Students for Trump Instagram page, the petition quickly recirculated. The account, @sft_loyolamu was created at the end of August.

“After the event that occurred during the summer, I decided to create the account for many reasons," she said. “For one, conservatives are silenced on campus; more so, those who support our president … I want to show closeted conservatives that there are more of us out there than they think who support President Trump.”

Change.org user Scarlett Manning commented, “Everyone deserves to feel safe at school while getting their education. If a representative of LMU’s student body doesn’t support undocumented students, this violates their right to safety at school.”

Vanessa Ibarra, another commenter, said, “Stephanie Martinez should be stripped from her position immediately due to her offensive and dehumanizing remarks towards undocumented students. She does not represent LMU’s core values and her lack of inclusivity illustrates her blatant ignorance.”

According to Speaker of the Senate Kyle Saavedra, in order for an impeachment process to begin, an undergraduate student must present an impeachment complaint to the Senate. The complaint must include a list of potential witnesses.

An impeachment trial for Martinez has not been initiated yet, according to ASLMU Chief Programming Officer Brion Dennis.

According to the ASLMU Bylaws, the grounds for impeachment are as follows: "Egregious and/or intentional violations of official ASLMU or University, rules, policies, or procedures as they relate to the individual’s duties as a Senator; conduct that violates the mission of ASLMU or the University and conduct that severely damages the integrity or authority of ASLMU or the office held by the individual in question. However, "Appointment and/or legislative activity shall not serve as grounds or as support of grounds for impeachment."

“To my knowledge, there hasn't been a full impeachment trial of a Senator in recent years, but there has been a resignation in the past couple of years at the request of the student body. This senator resigned right away and vacated their position,” said Saavedra. “Clearly, this is the easiest and best way to resolve the student body having an issue with an elected Senator, but impeachment is the Plan B if that Senator refuses to resign.”

Saavedra said, “I want to encourage all students to look over the bylaws on our website and know their rights as undergraduate students and the power they have to hold their elected officials accountable when they endanger the student body.”

For students hoping to reach the ASLMU Speaker of the Senate with more information, they can contact Saavedra at aslmu.speaker@lmu.edu or visit his office hours on Thursdays from 4-6 p.m. PST.

Kennedi Hewitt is a sophomore english and journalism double major from Inglewood, CA. She enjoys reading, listening to music and wasting her meal plan on Starbucks.

If Ms. Martinez is removed from her position I hope she files a discrimination lawsuit against the university and takes them for all they're worth.

LMU is a great university and I've enjoyed reading this student paper but the more I read it the more obvious it is that it's diving head first into the politically correct, social justice warrior, up is down and down is up mindset that's resulting in thousands of ill-prepared, bitter, unqualified students wracked with mountains of debt that they'll never be able to pay off. I hope it turns around before people discover just how unnecessary college is these days, especially ones that cost as much as a house.

My law firm will be following this matter, taking special note or any individuals - students or administrators - who violate her civil rights as a student and as a United States citizen. It is these individuals who violate the rights of patriots like Ms. Martinez who need to be held accountable. LMU has an obligation to protect her. We will see if it does so.