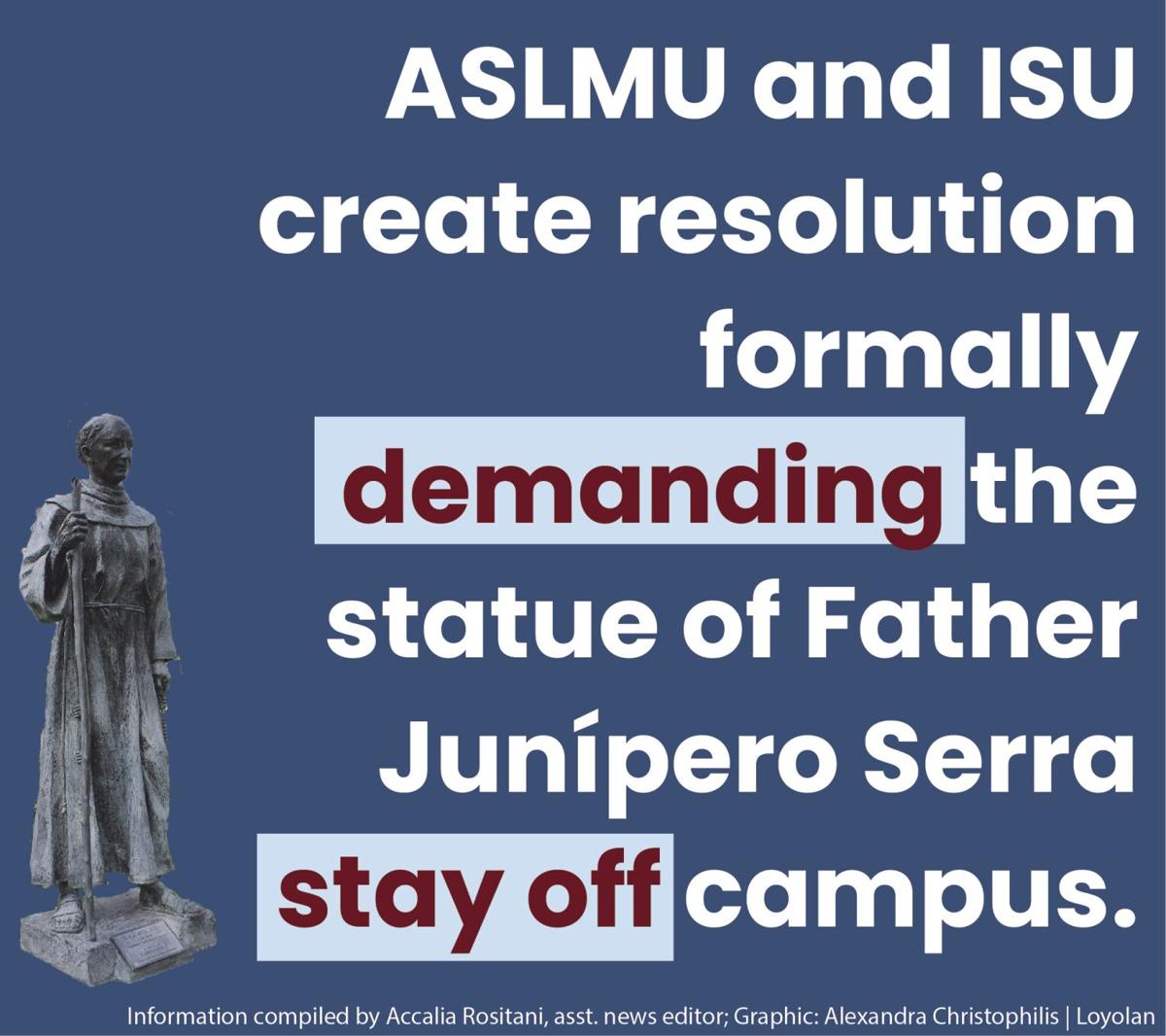 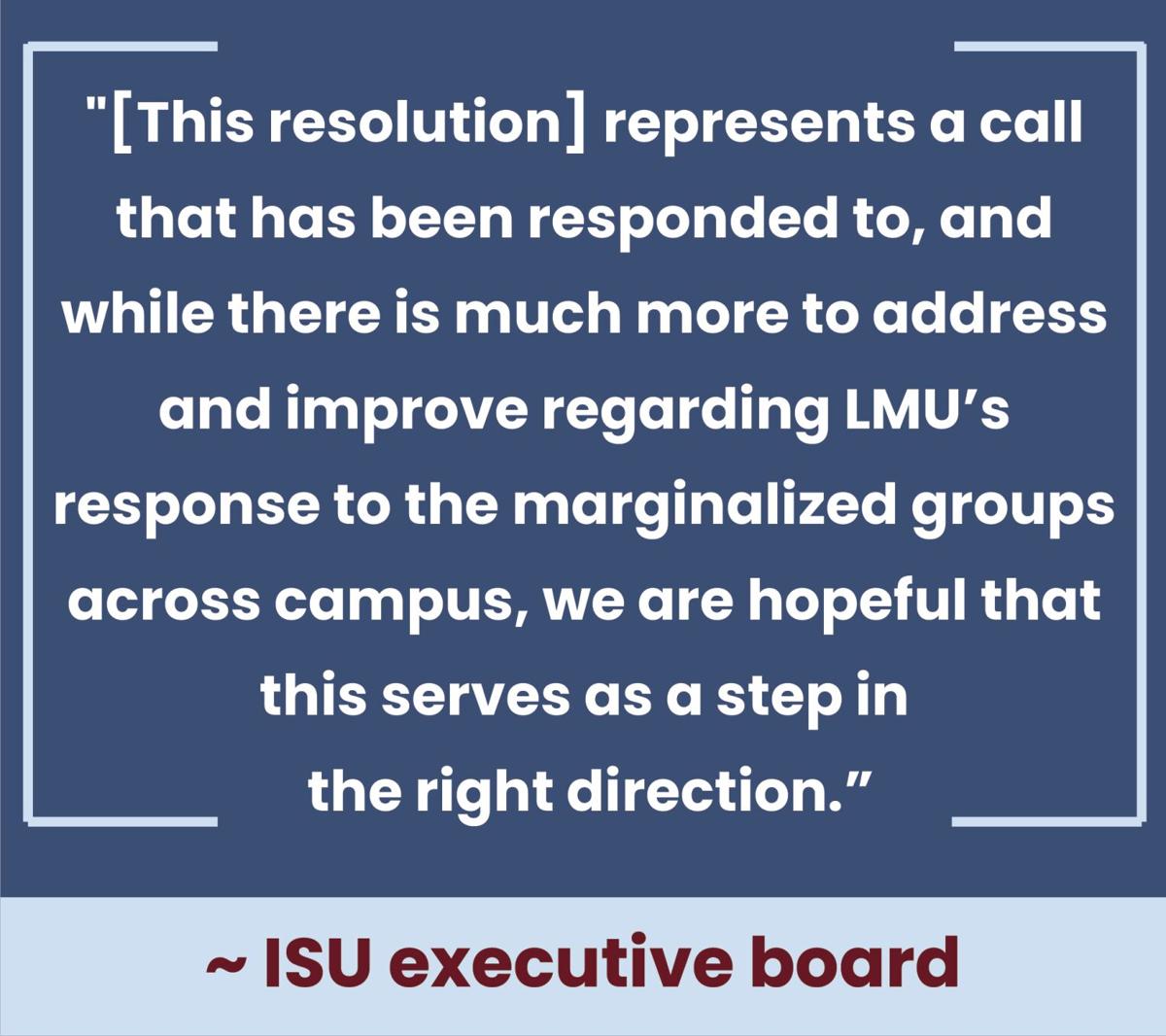 In response to demands from LMU’s Indigenous Students Union (ISU), ASLMU and ISU have collaborated to draft a formal resolution calling for the permanent removal of the statue of Father Junípero Serra from campus.

This comes after the University announced the statue will be reinstalled on campus with added historical context, after it was removed this summer, as previously reported by the Loyolan. ISU is demanding the statue stay off campus due to Serra's violent history with Native Americans from present-day California.

ISU shared in an Instagram post that a University representative met with them on Nov. 4 regarding their demands, taking “an initial step for establishing working relationships with the University” and ISU. Since then, ASLMU has been in communication and collaboration with ISU on the resolution, “getting feedback and learning exactly what [ISU] wanted to be a part of the resolution,” said Sam Camper, a sophomore finance and economics double major and ASLMU senator for sorority and fraternity life. The initial draft shared with ISU was written by an ASLMU committee composed of first year senators, an international senator, senators for diversity and inclusion and Camper.

“The collaboration with ASLMU has not only been productive, but it has been mutually very rewarding,” said the ISU executive board. “Both sides have been extremely supportive and receptive with one another in working towards the resolution and it brings us hope that we can work together to spread more awareness and make change.”

Building on a resolution ASLMU senators wrote in 2019 recognizing and supporting ISU, the current resolution specifically addresses the Serra statue. ASLMU outlines its support for the permanent removal of Serra’s likeness and recognizes ISU’s efforts to fulfill this action. “We also just wanted to talk about what signifies the importance of the removal, of helping build a more safe and cohesive community within LMU whether it's virtual or in-person, creating that welcoming experience for all students no matter their background or identity,” said Camper.

The document also appeals for LMU students and faculty to be educated on the implications of Christian colonialism and acknowledge the Tongva people, “whose land was forcefully taken and now is the home to LMU," said ISU. These demands further serve “the goal of holding LMU accountable on their promise of anti-racism while ensuring the acknowledgement of Indigenous populations affected by colonialism,” according to ISU.

ASLMU hopes this process sets a precedent for future dialogue and collaboration among student government and student organizations, groups and unions. “We want to help bridge the gap from advocacy from student groups to administration,” said Camper, particularly when such groups call for actions that will increase students’ safety and comfort within the LMU community.

This sentiment is echoed by ISU, which has been demanding the removal of the statue since ISU’s founding in fall of 2019 and bringing awareness to Serra’s violence towards Indigenous people. “This represents a call that has been responded to, and while there is much more to address and improve regarding LMU’s response to the marginalized groups across campus, we are hopeful that this serves as a step in the right direction,” said ISU.

While the virtual environment has hindered the pace of drafting and formalizing the document, the resolution is expected to be signed and published on ASLMU’s website this week, according to Camper. “It [the virtual environment] does make stuff a little bit harder to work on, but we were determined and ready to get this resolution out as soon as possible because it's such a pressing issue for a lot of students on campus and also us,” he said.

Throughout their efforts to remove the statue, ISU has enjoyed “overwhelmingly positive” feedback from students. In person and on social media, students have not only listened to their peers but also cast their support for the statue’s removal. “It has been exciting to see our fellow Lions being receptive and understanding to our call to action,” said ISU. They hope to experience the same backing from the faculty and administration of LMU, as “this resolution represents a fight for acknowledgment and against a very damaging history,” they said.

I stopped giving money to LMU long ago because of SJW garbage like this, I throw their little notices in the trash as soon as I get them in the mail. It's been well documented that St. Serra protected, educated and was compassionate towards the Native Americans in California and that most of the drivel that people criticize him for is wholly untrue. This is another sad and pathetic attempt at 'wokeness' that unfortunately has enveloped Jesuit universities across the country including LMU. If this is the kind of thing that students are learning at the unbelievably high price tag that an LMU education is running nowadays I don't think the future is going to be kind to the university and the students being shoved through it.

Choosing to attend a Jesuit university includes financially paying for and otherwise supporting the doctrines that the university subscribes to. Should one not wish to be supportive of the values and history that the university holds, it seems to me that the simplest option would be to pursue higher education elsewhere.

I do not support the mission system, which is nothing more than enslavement and genocide of the California Indians, but in choosing to attend LMU, I further expanded my knowledge of Jesuit tradition and acknowledged the sad history of the indigenous people in the area. There is no erasure of the past and I as a proud Native American woman of Mescalero Apache, Navajo and Genizaro heritage am all too aware of this. Removing a statue of a Jesuit who partially masterminded the mission system does not undo all that’s happened. In fact, by removing reminders of the indigenous only sweeps that history under the rug which is something that should never happen.