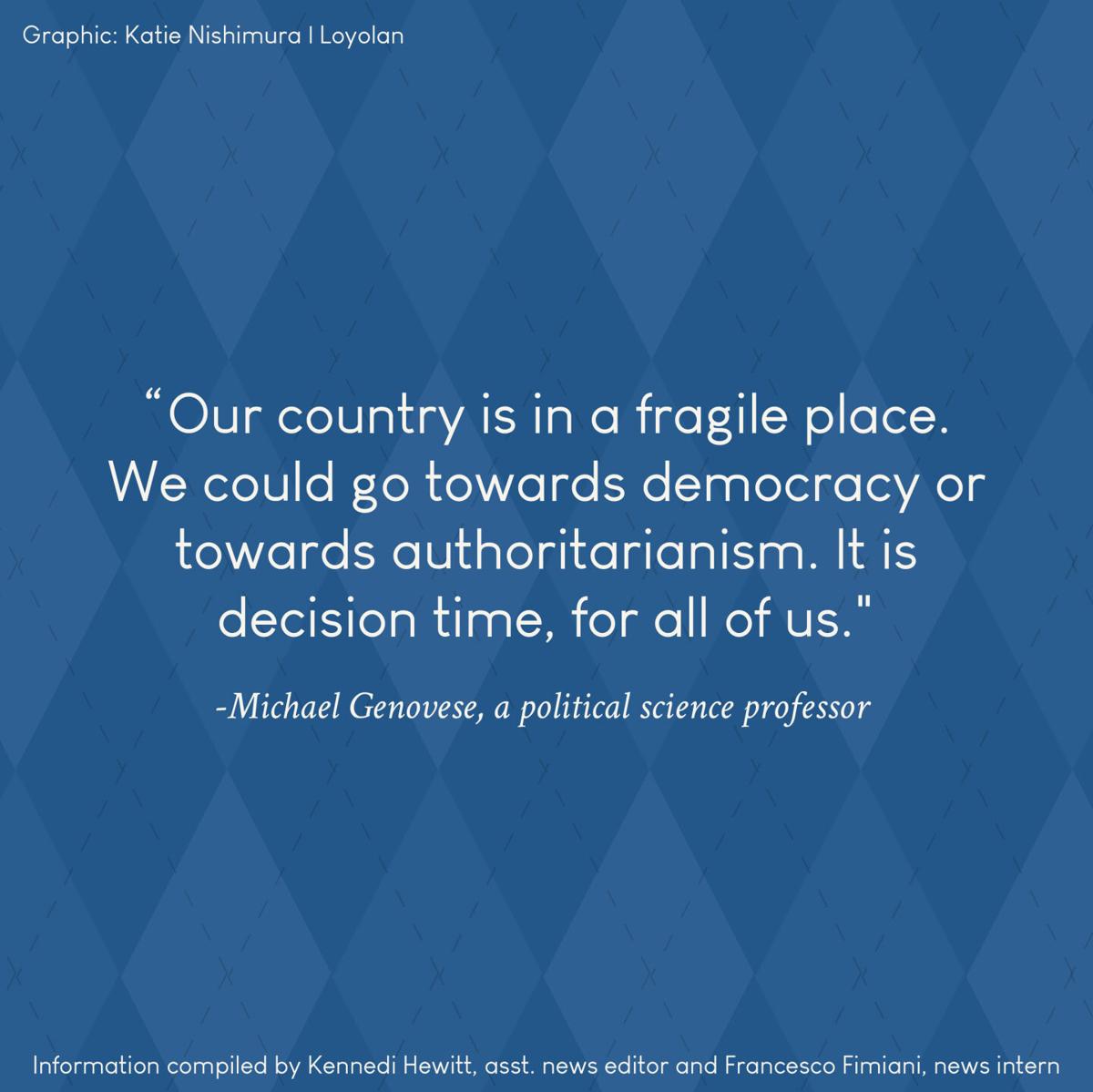 A quote by a political science professor at LMU explaining an imperative decision the U.S. has to make. 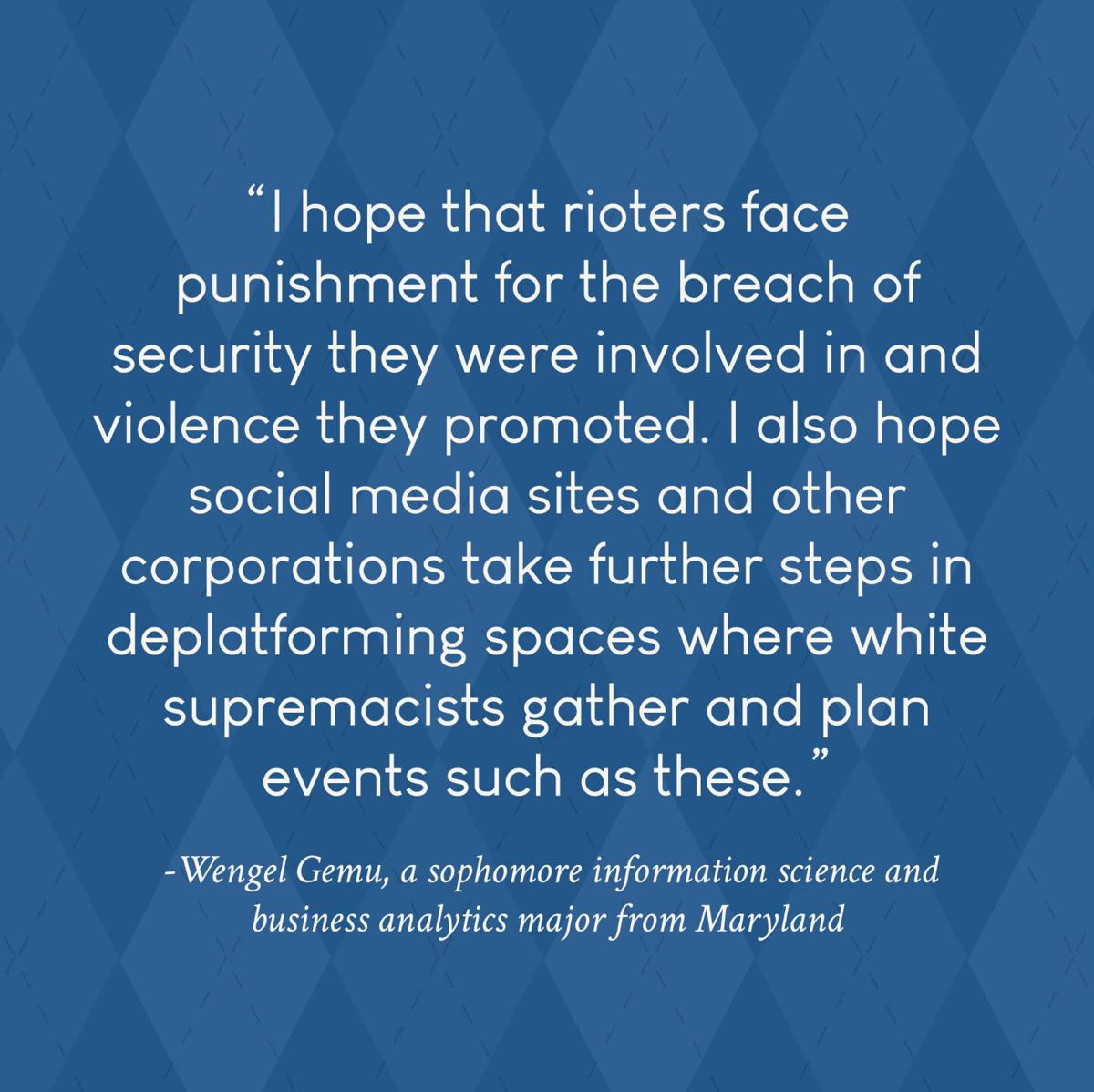 A quote by a political science professor at LMU explaining an imperative decision the U.S. has to make.

Hundreds of insurrectionists stormed the United States Capitol in an attempt to overturn presidential election results. On Jan. 6, Congress and Vice President Mike Pence convened in the Capitol to count electoral votes and to confirm president-elect Joe Biden’s win; however, their session was violently interrupted by supporters of President Trump who were breaking into what is usually a heavily guarded federal building.

The day before the attack on the Capitol, Trump tweeted that Pence, who was in the Capitol to confirm electoral votes, has the power to “reject fraudulently chosen electors.” While this claim is not true, it made Pence a target during the insurrection, with rioters claiming to be looking for Pence as they marched through Capitol halls.

As rioters closed in on House and Senate chambers, an armed standoff began between pro-Trump insurrectionists and Capitol Hill security. As a group attempted to break into the chambers they were told to retreat from, a woman was shot dead by police. The woman, later identified as U.S. Air Force veteran of 14 years, Ashli Babbitt, was one of five people to die amidst the violence. Of the five people dead, one included a Capitol Hill officer whose exact cause of death has not been revealed.

Wengel Gemu, a sophomore information science and business analytics major from Maryland, said that she initially heard about the riots from her father, but received updates from social media. She said there had been riots in D.C. leading up to the Capitol breach, but she was still shocked to learn they actually surpassed Capitol Hill security.

“You grow up in D.C. knowing how elevated security presence is and learning to respect the historical significance of most landmarks,” said Gemu. “I never would have considered clearance past the wall possible, much less an actual Capitol invasion.”

Bria Thompson, a sophomore film and television production major from Maryland, agreed with Gemu regarding her shock at how rioters were able to surpass security.

“Especially since police and security presence was so weak previously, I worry that the events at the Capitol may have emboldened and angered more white supremacists,” said Gemu. “I hope that rioters face punishment for the breach of security they were involved in and violence they promoted. I also hope social media sites and other corporations take further steps in deplatforming spaces where white supremacists gather and plan events such as these.”

As of Jan. 11, more than 20 insurrectionists have been arrested due to social media posts that made them easily identifiable.

Professor Genovese, a professor of political science and the president of the Global Policy Institute at LMU, said, “Our country's reputation as a beacon of democracy was dragged through the mud, our democratic process and traditions were severely threatened and the world watched as a mob took over the Congress.”

Many other states faced their own protests at state Capitol buildings, including California. Several hundred pro-Trump residents gathered at the Capitol building in Sacramento to protest the electoral votes. The rally escalated as Trump supporters clashed with an opposing group of protestors.

Obi Ugorji, a sophomore international relations major from Sacramento, said that he found out about the protests through warnings and social media posts from friends saying to stay away from the area. He said that despite the escalating tension, the rally in Sacramento seemed a lot more controlled than the one in D.C. did.

The FBI has warned of armed protests in all 50 states the week of Biden’s inauguration.

However, the chaos did not end Jan. 6. Soon after the attack, many began calling for the impeachment of President Trump for allegedly inciting violence and insurrection. Many politicians and government officials pointed to tweets and speeches of Trump referring to the insurrectionists as “patriots” and encouraging his supporters to fight against the “stolen” election. Twitter suspended Trump’s account on Jan. 8., joining the movement in banning the President from multiple social media platforms.

Many politicians in Congress have recently begun discussing invoking the 25th amendment to immediately remove President Trump from office.

The 25th amendment to the US Constitution was crafted in the wake of President John F. Kennedy’s assassination and was meant to draw a clear line of succession in case of a President falling short of his duties as elected official. It’s worth noting that a President being “unable to carry out the duties of the executive” was originally intended to be used in the event of a serious debilitating circumstance such as a coma or severe stroke and not due to anxieties over a president's brush with authoritarianism.

Tuesday night, Pence penned a letter to Congresswoman Nancy Pelosi affirming that he will not invoke the 25th amendment, saying that using the 25th amendment as a means of punishing the President will "set a terrible precedent."

Sources close to President Trump and Vice President Pence say their relationship has soured following Pence’s refusal to overturn the results of the 2020 election and Trump’s inability to condemn rioters who were planning to kill the Vice President over this matter.

It should be noted that Vice President Pence had no legal right to throw out electoral college votes and override the will of the people in favor of President Trump.

As the intricacies and need for invoking the 25th amendment swirl around Mike Pence and the Trump cabinet, House Democrats formally introduced impeachment proceedings Monday citing “incitement of insurrection” as grounds for removal from office among a plethora of other vote tampering accusations, such as the infamous call to Georgia’s secretary of state urging him to “find” more votes.

This legislation comes to a vote on Wednesday morning, a day after the House will also vote on a resolution calling on Mike Pence to invoke the 25th amendment to remove Trump from office as quickly as possible.

It is unclear what the future of impeachment this time looks like in the senate. House minority leader Kevin McCarthy has argued for alternatives to impeachment as it is seen as too "divisive." Some of the alternatives proposed among GOP members include a censure and a commission set up to further investigate the events of the Jan. 6 riots. House Speaker Nancy Pelosi called censure an “abdication” and seemed averse to the alternatives proposed by McCarthy.

“Our country is in a fragile place. We could go towards democracy or towards authoritarianism,” said Genovese. “It is decision time, for all of us.”

Kennedi Hewitt is a sophomore english and journalism double major from Inglewood, CA. She enjoys reading, listening to music and wasting her meal plan on Starbucks.

If you think the riots in Washington were despicable, which they were, but spent the summer encouraging and defending the riots that resulted in billions of dollars in property damage, private businesses destroyed, police stations overrun, even churches vandalized, solely because those particular riots align with your current political views then your opinion doesn't really count for much and your complete lack of moral character is something you should reflect upon.