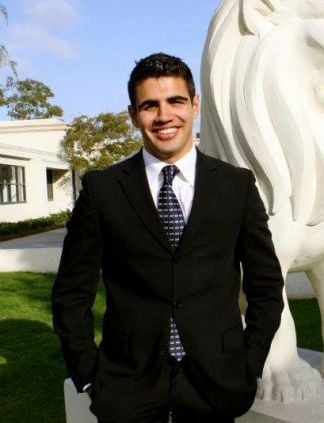 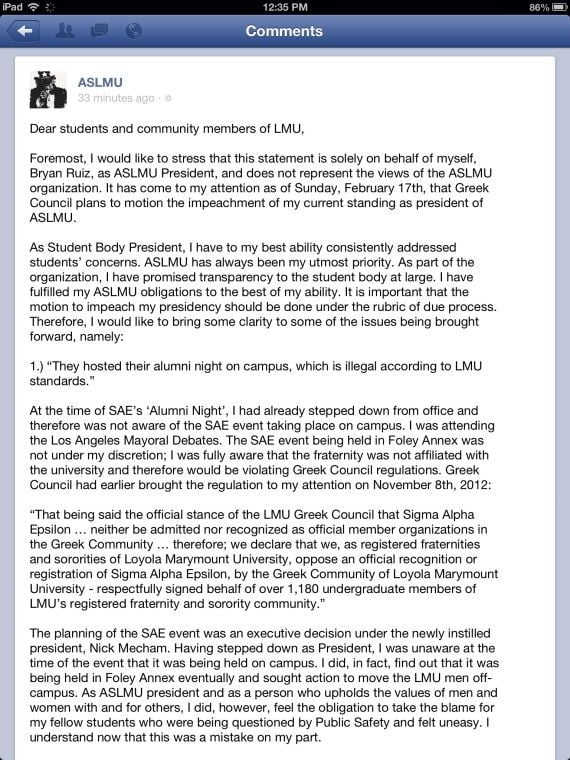 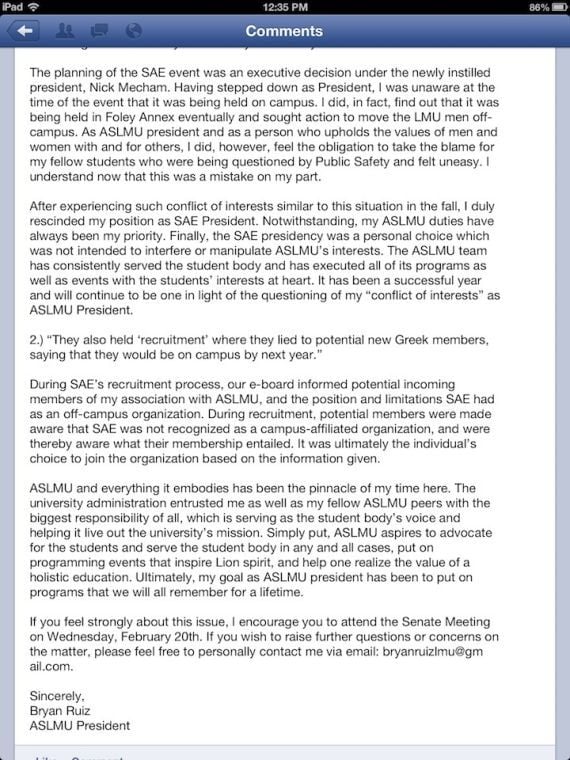 [UPDATE 1: At approximately 12 p.m. on Tuesday, a statement signed by President Bryan Ruiz was posted on ASLMU's Facebook page. The statement was a response to the alleged impeachment charge being brought forward by the Greek community. The statement addressed two of the charges that will likely be brought forth, including an on-campus SAE alumni night.

Approximately half an hour after it was posted, the statement was taken down. See screenshots of the post attached to this story here and here.]

Information is currently being compiled for the purpose of filing an impeachment complaint against current ASLMU President Bryan Ruiz, according to Greek Council President Lauren Coons.

Coons said that the decision was made in the last 10 days, and the complaint will be made on behalf of everyone in Greek Life. She referred to Ruiz's presidency of the off-campus chapter of Sigma Alpha Epsilon (SAE), colonized last semester, as the reasoning behind the complaint.

"SAE has been on Greek Life's radar for a long time," Coons said.

Members of Pi Beta Phi sorority were informed of the potential complaint during their chapter meeting on Sunday, Chapter President Ellen Zirkelbach said. According to Zirkelbach, the chapter's Greek Council delegate, junior business administration major Deanna Walker, also sent out an email to members with more information on the complaint.

Though she couldn't place an exact time frame for the filing of the complaint, Coons said it would likely be filed sometime in the next two weeks. However, Zirkelbach said that according to Walker's email, Greek Council's executive board would be attending this Wednesday's ASLMU Senate meeting to file the complaint.

According to the ASLMU bylaws, an impeachment complaint can be filed by any undergraduate student. The complaint must be presented to the Senate with a list of possible witnesses, as well as "a description of the alleged improper conduct and the grounds for impeachment." Should the Senate motion to commence the impeachment proceedings, a hearing would be held during the next weekly Senate meeting "to determine the validity of the complaint."

A statement was released on ASLMU's Facebook page at approximately noon today that was signed by Ruiz. In the statement, Ruiz preemptively responded to two issues he deemed likely to be brought up by the Greek community's impeachment complaint. He also said that he had stepped down from his position as SAE president – former Vice President Nick Mecham has been named the new president. Ruiz also encouraged attendance at tomorrow's Senate meeting.

The ASLMU bylaws can be found on the organization's website. ASLMU Senate's weekly meeting is held in the Hill on the fourth floor of Malone every Wednesday at 1:15 p.m.

Kevin O'Keeffe is a senior screenwriting major from Austin, Texas. In Texas, he once saw a man riding a horse on the highway and knew he had to move far awayâ€“ hence attending school in Los Angeles. He loves "Revenge" and Kelly Clarkson revenge songs.

Lauren Coons should be absolutely ashamed of herself. She made us Greeks look absolutely ridiculous, mean, and malicious. Over 50% of Greeks don't agree with her and those that do are just guys from frats that felt threatened by yet another male group on campus. Many of my friends who aren't Greek now look at us like we control who stays and who goes which is obnoxious because we don't. ALSO, if the impeachment process was already in the middle of happening when her 'oscar winning performance was made' why did ASLMU let her talk? She made us look terrible and it WAS ALL FOR NOTHING. It's just extremely frustrating that she considers herself to be the voice of Greeks. My hope is that she gets laryngitis or something and loses that voice

The only people that should be impeached is the greek council and administartion over that council. These are obviously people who have stepped over their power boundaries and are now trying to slander and destroy someones ASLMU position simply because he did not "adhere to their organizations". After reading Coon's statement "forming SAE was a slap in the face", it left me laughing. The only slap in the face was SAE pushing for greek expansion, then once they agreed decided to cast SAE aside. Now it has turned into a witch hunt, that is only ending with the persecution, discrimination, and harassment of PAYING LMU STUDENTS. What happens to all that bs they said when first enrolling in this campus? Seems like they don't want to foster the personal growth of students, but destroy it. Its easy for the administration to sit back and say "this is the way it is" so they can continue sitting down and doing nothing while getting money thrown at them

This story truly saddens me. As a senior here at LMU and having transferred here from my former university a little over 2 years ago, I've had frequent talks among friends and faculty about my experiences here and how I thought it was transferring in to LMU. And I have to be honest - my answer was always the same - Be Greek or be no one. I have always felt that Greek life is taken way too seriously and holds much too much influence over the works of student life here. And this is just another example of it rearing its ugly head. That being said - I do not say this to mean individual students who have joined Greek life for I know and am friends with many (ranging from Beta Theta Phi to Kappa Sigma) and they are great people. Greek Life the organization though has no control. I find their resentment of off-campus organizations ridiculous. Having myself pledged to a off-campus fraternity at my old school, I can say from experience that these are not men who are out to destroy the LMU way of life or to cause havoc across the university. Fraternities like SAE and Kappa Sigma are simply a group of guys with similar interests and desires who never found that connection with "sanctioned" fraternities on campus. The Greek Council should be ashamed of this and the university as a whole should be ashamed for even allowing this assault of character happen.

From someone who does not take part greek life, I was surprised to hear that greek council is attempting to impeach Ruiz. ASLMU is an organization that represents ALL of LMU students, the very large majority of which are not Greek. I agree with lmurugger that the only people that have a problem with Bryan are a small handful on Greek Council. I asked a few of my friends who are Greeks and they were all indifferent - two girls flat out confirmed it was just due to politics in LMU Greek life. I think Greek Council and their advisers are overstepping their bounds as retaliation for SAE colonizing off campus. It's very immature and cowardly to attempt to ruin someone's reputation over such a simple disagreement. This is a very vindictive move that is not in line with the values LMU stands for as a Jesuit University.
Best of Luck, Bryan.

From an outsider perspective, this seems more like a pride issue with the Greek Council rather than a legitimate reason to attempt impeaching Bryan. I can't think of anyone outside the Greek Council who really has a problem with Bryan and I know several people within Fraternities and Sororities who do like Bryan. An even greater percentage of people are indifferent to the situation. Is it really necessary to attempt to damage a person's reputation like this especially when he only has a couple months left? Maybe if he had done something to significantly damage the school as a whole this wouldn't seem so arbitrary, but it's not like he even has that much power compared to the rest of the LMU administration. This attempted impeachment just seems to be a waste of time.

I posted this on the ASLMU Facebook but since I assume it will be deleted from there I will post here as well:

I no longer attend LMU, therefore I have no official dog in this fight. However, I can tell you that in my eyes you have done nothing wrong and I fully support your decision to combat this impeachment effort. I read the piece you wrote earlier (which appears has been deleted) and commend you on trying to get your word out. Greek council and Loyola Marymount in general, have held a longstanding resentment towards affiliated members of off-campus organizations, particularly fraternities such as SAE and Kappa Sigma. It is unfortunate that a young man like yourself, who has worked hard to take on an esteemed leadership position such as ASLMU President, should even be under consideration for removal of said position just by your association with SAE, a nationally recognized organization of prominence. What is of more disappointment, is that a school who represents itself as a Catholic institution, continues to display acts of deliberately isolating segments of students and negatively portraying these people in a public light. Keep the faith in that you are doing nothing wrong and hopefully more of your side of the story is told over the next few weeks to help shed light on that. Best of luck in your battle.