You are the owner of this article.
Edit Article Add New Article
You have permission to edit this article.
Edit
NEWS
OPINION
LIFE+ARTS
SPORTS
THE BLUFF
CARTOONS
SOCIAL JUSTICE
VIDEOS
CLIMATE 360
CENTENNIAL
SPECIAL ISSUES
MORE
1 of 5 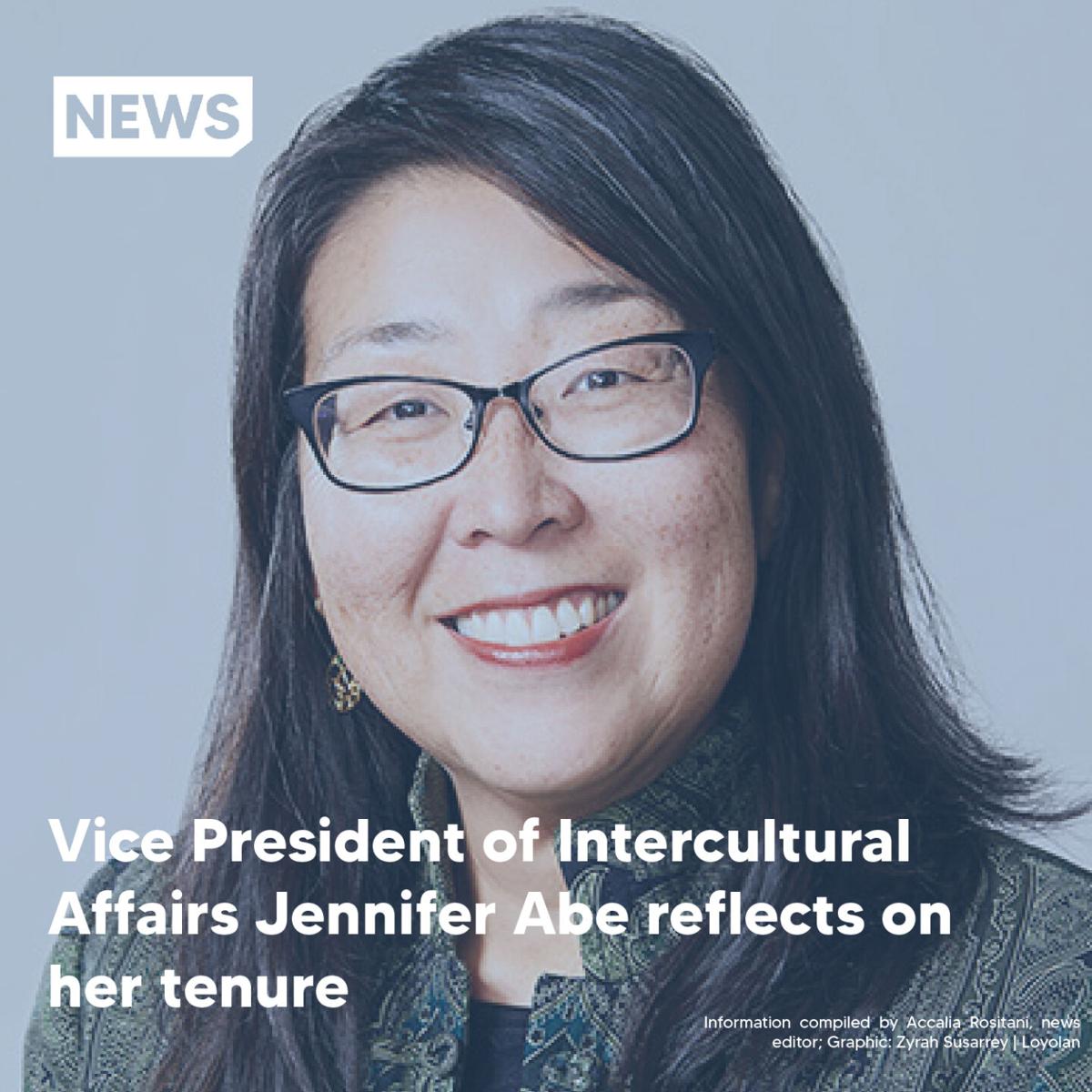 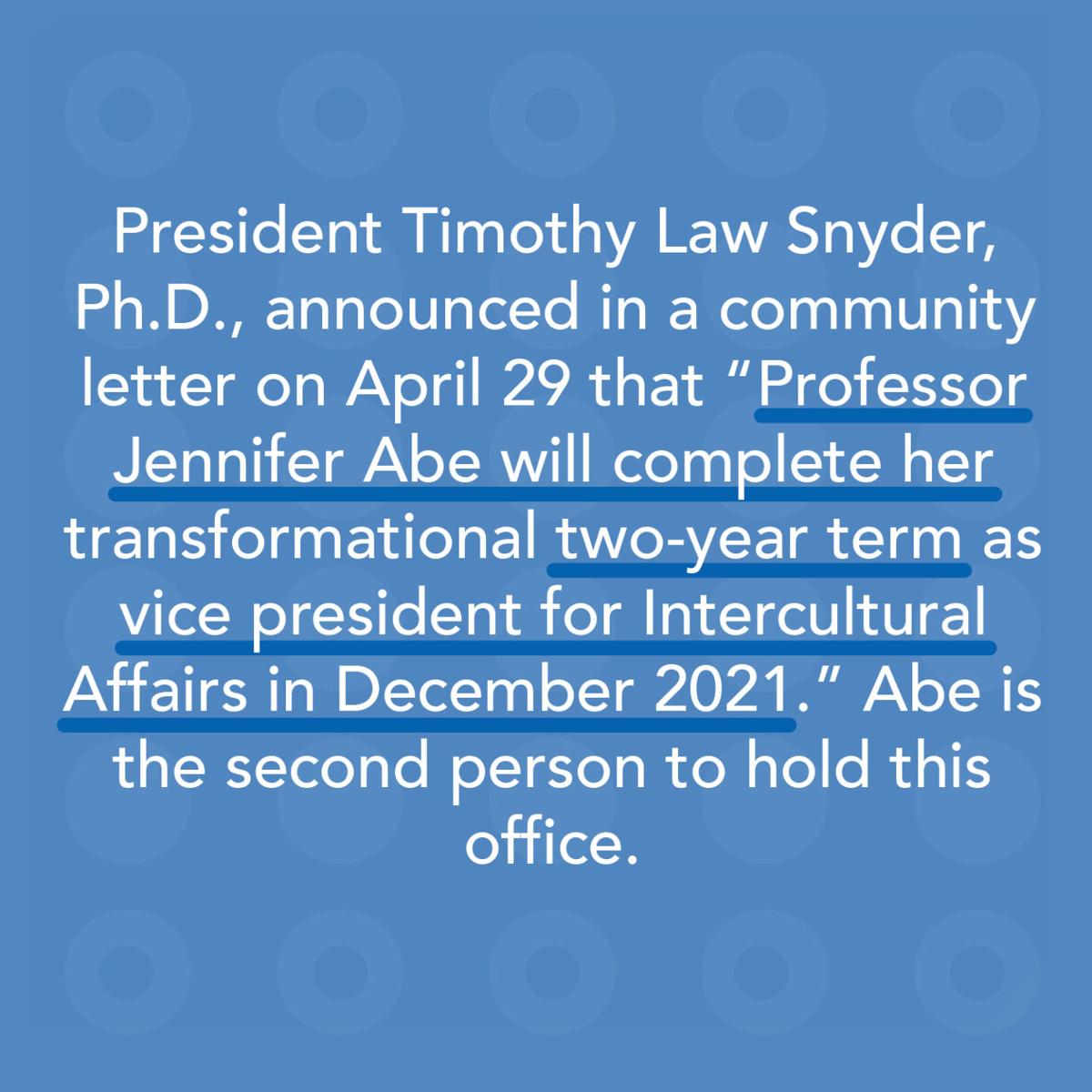 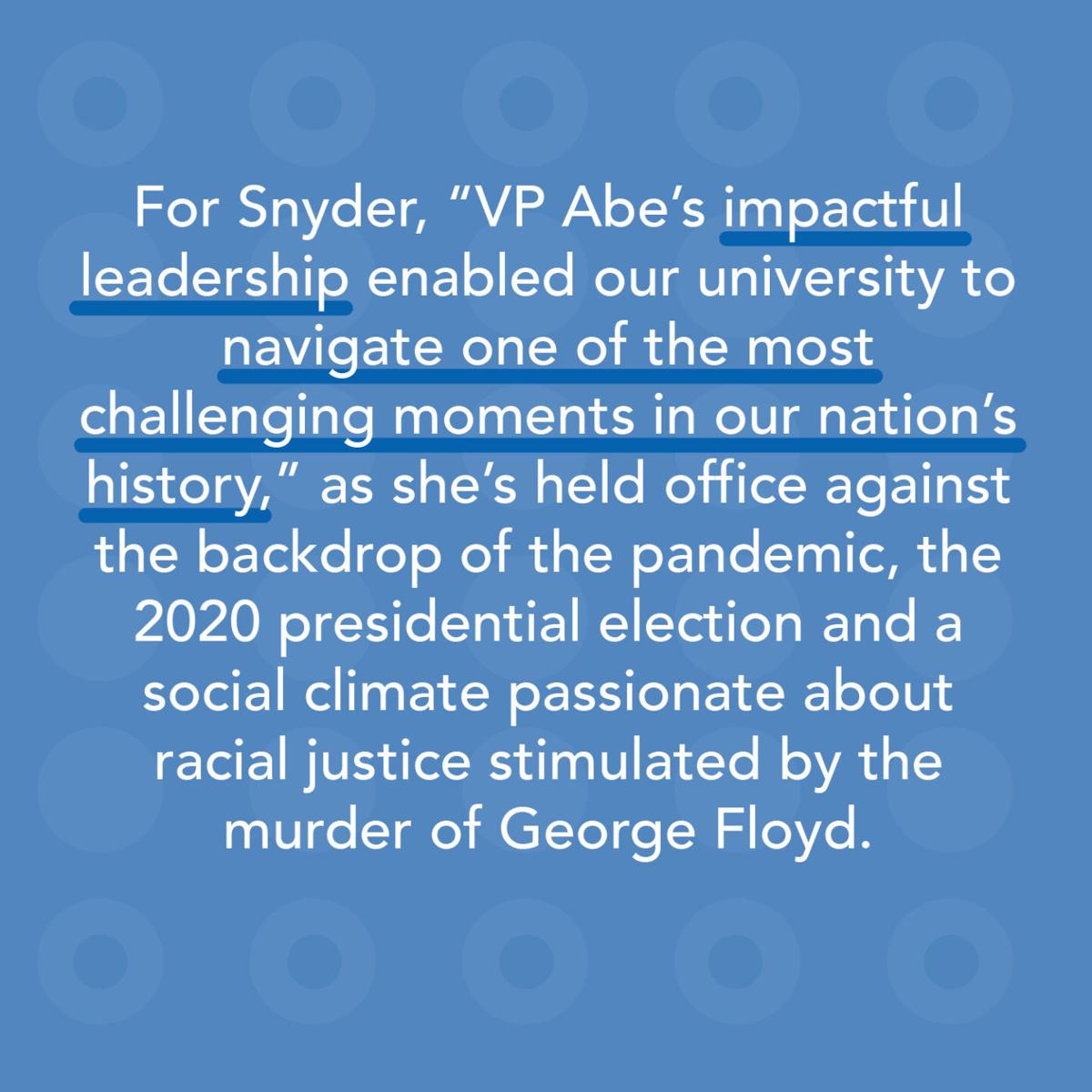 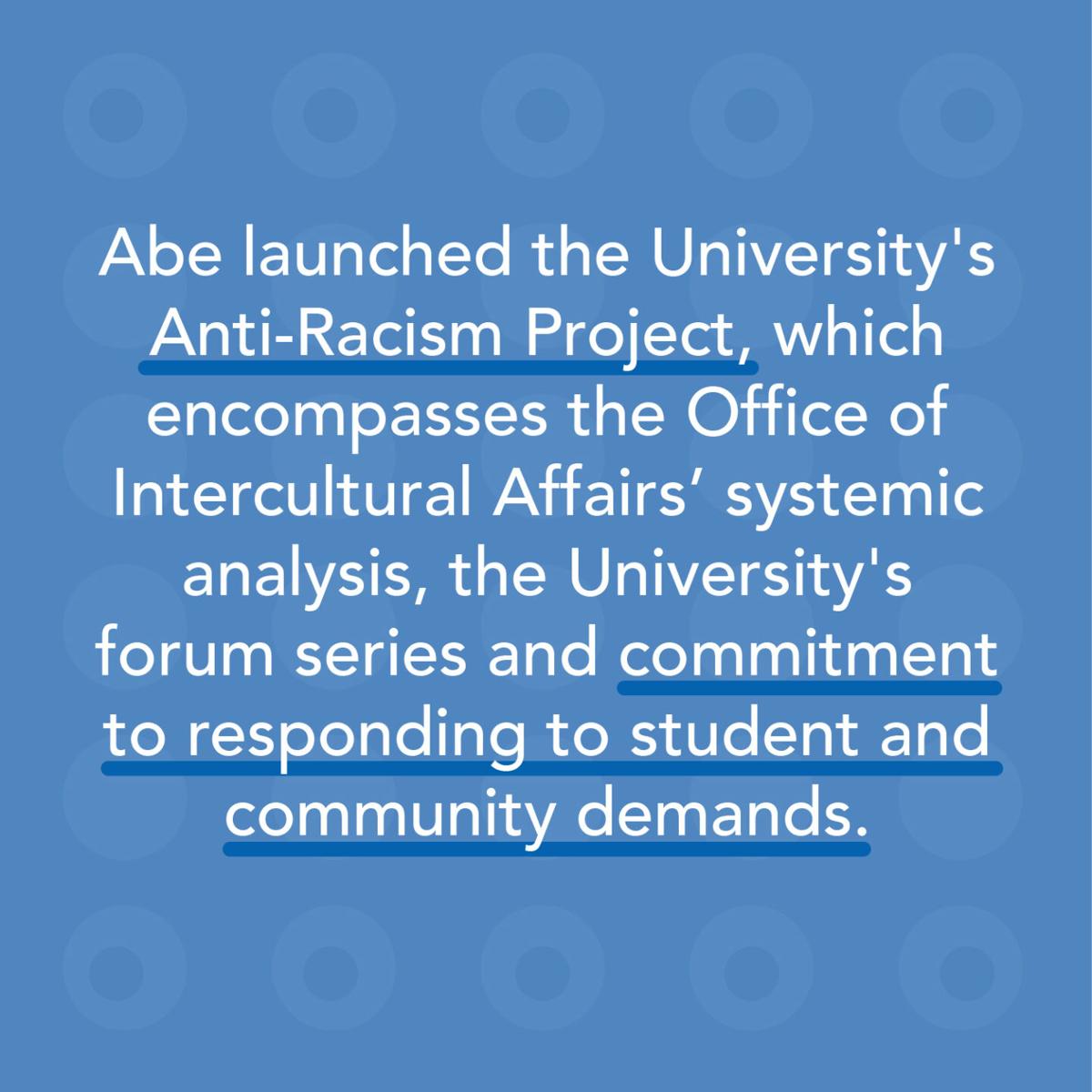 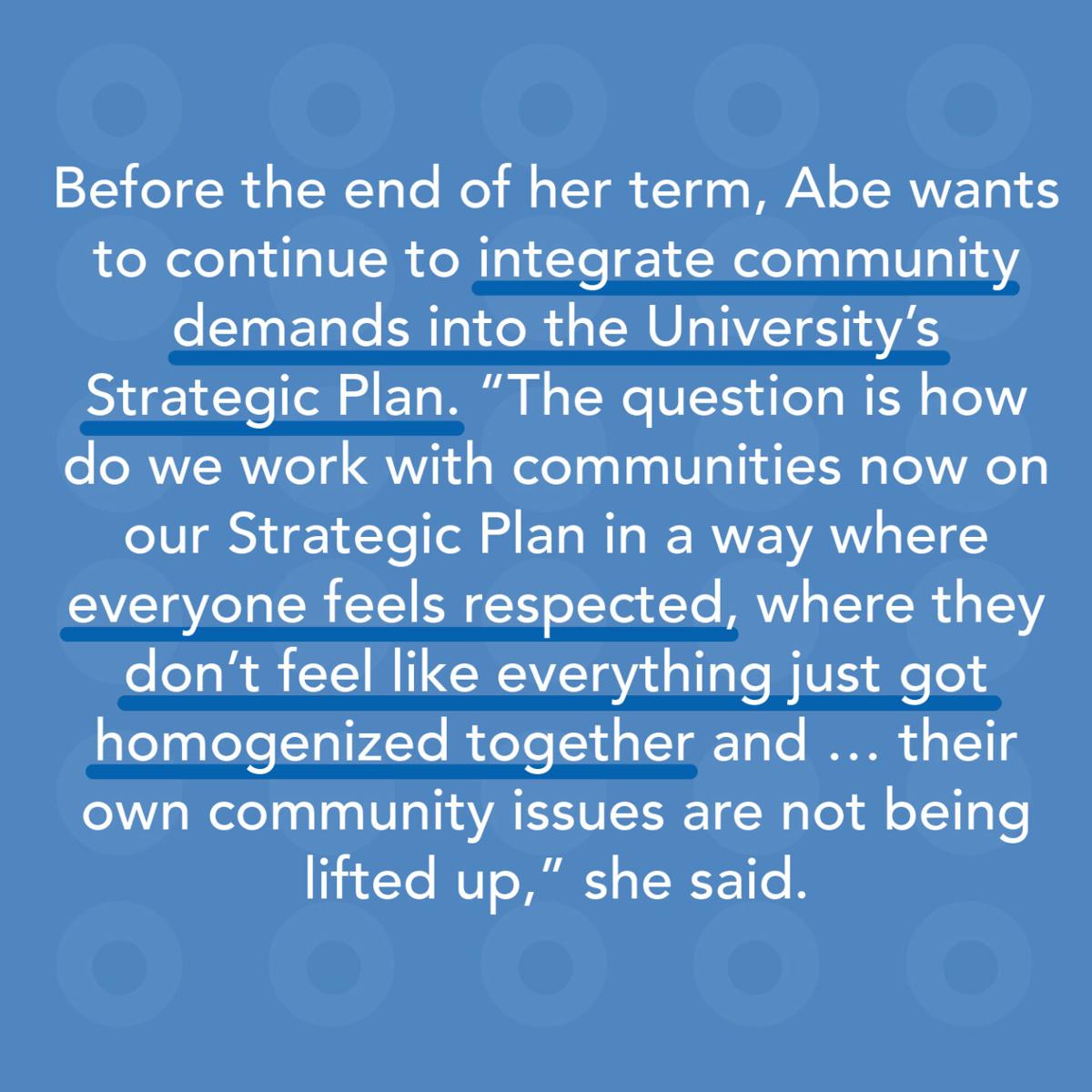 President Timothy Law Snyder, Ph.D., announced in a community letter on April 29 that “Professor Jennifer Abe will complete her transformational two-year term as vice president for Intercultural Affairs in December 2021.” As the second faculty member to hold this office, Abe feels this role has been both “a gift” and “the biggest challenge … among the biggest [she’s] faced” in her professional career.

Before beginning her term as vice president for the Office of Intercultural Affairs (OIA) in January of 2019, Abe served in various leadership positions at LMU. She has worked as associate dean in the Bellarmine College of Liberal Arts, the acting chair of the psychology department and founded the Casa de la Mateada study abroad program as a co-director. Abe earned her Ph.D. in clinical psychology from the University of California, Los Angeles and is a senior research associate at LMU’s Psychology Applied Research Center.

For President Snyder, “VP Abe’s impactful leadership enabled our university to navigate one of the most challenging moments in our nation’s history,” as she’s held office against the backdrop of COVID-19, the 2020 presidential election and social tensions following the murder of George Floyd. Abe refers to his murder as the most challenging moment of her term to date.

“I met with a small group of my colleagues—Henry Ward, Stefan Bradley, Cheryl Grills—they’ve been a space of consultation and also support for me,” said Abe. She attributes her leadership during this time to the consideration and backing of her associates. “The role cannot progress without partnerships and collaborations … the VP for Intercultural Affairs is harnessing all the energy across the University and having it be a part of the mission of each unit, so that it’s not an add on but it becomes the work of the University.”

“I think one of the ways that I have learned how to lead is to really listen … [listening] in community and feeling our way forward,” she said.

Abe recalls President Snyder’s letter to the community in June 2020 declaring LMU’s commitment to anti-racism as a critical moment. “We’re making commitments in these three areas: hiring, climate and culture and education. There’s no softening it … he was saying ‘this is who we’re going to become.’” For Abe, “to have that kind of clarity and support … as a chief diversity officer that is what you dream of and what you need, otherwise institutions can’t move.”

This announcement led to OIA’s systemic analysis, which facilitates “unit-level reflection” within the University to find “often-invisible barriers for fully addressing the needs of all [LMU] students, especially those who are minoritized and/or marginalized in our society.”

“Last summer the load on my team—it’s not a big office—[was to] to develop the idea for the systemic analysis, all the resources, website and then a consultation workshop,” Abe said. She was especially concerned with creating a system that was not top-down. “It was more like setting clear expectations but letting units really identify for themselves what we can do,” she said. This endeavor set a precedent for units to reflect and listen to students.

Thus far, Abe sees the resulting changes as “substantive across the University.”

In his message on April 29, Snyder also highlighted that, “along with the Intercultural Affairs team, and colleagues and students from across the university, VP Abe launched LMU’s Anti-Racism Project.” This project encompasses the OIA’s systemic analysis, as well as the University's Virtual Forum Series, which recently closed the academic year with a progress report on April 13.

Responding to demands has also been among the Anti-Racism Project’s commitments, as expressed in LMU This Week. As previously reported by the Loyolan, the University has responded through OIA and Abe to demands from #BlackatLMU, the Black Faculty and Staff Association, the Asian and Pacific Islander Student Coalition and the Latinx community at LMU.

While Abe will no longer lead this project after December of 2021, she will continue her involvement. “When you’re engaged in this kind of [diversity, equity and inclusion] work it just takes different kinds of expressions depending on the role that you have,” she said.

Before the end of her term, Abe wants to continue to integrate community demands into the University’s Strategic Plan. Her goal is to have the metrics and outcomes of the plan reflect the concerns of each of the communities.

“We are at a really critical moment … This work of responding to demands is so important but we need to move from responding to each separate community independent to moving together towards our Strategic Plan,” she said. Abe sees this goal as a transition of focus and not as a subversion of demands. “The question is how do we work with communities now on our Strategic Plan in a way where everyone feels respected, where they don’t feel like everything just got homogenized together and … their own community issues are not being lifted up.”

Snyder announced, “We will soon conduct a national search to find candidates for this indispensable position. We will soon announce a search committee that will advise me as we seek and select our next executive diversity, equity, and inclusion leader.”

Abe only hopes that her successor’s leadership style is not top-down. “Continuing to really work closely with our community, to lead through listening … that path will ensure we don’t go wrong.”

She is confident that OIA will support her successor in the same way they supported her. “I think we have the infrastructure in place for a person to come in and they’re not starting from zero … They’ll be able to take their own gifts and take us to another place, and I’ll be contributing from wherever I am,” she said.

In December 2021, Abe will begin a sabbatical before returning to teach in the University's psychology department. "I'll be back in a year," she said. This time will allow her to finish her work on the California Reducing Disparities Project, which she has been working on with Grills before and "throughout [her] time in this role."