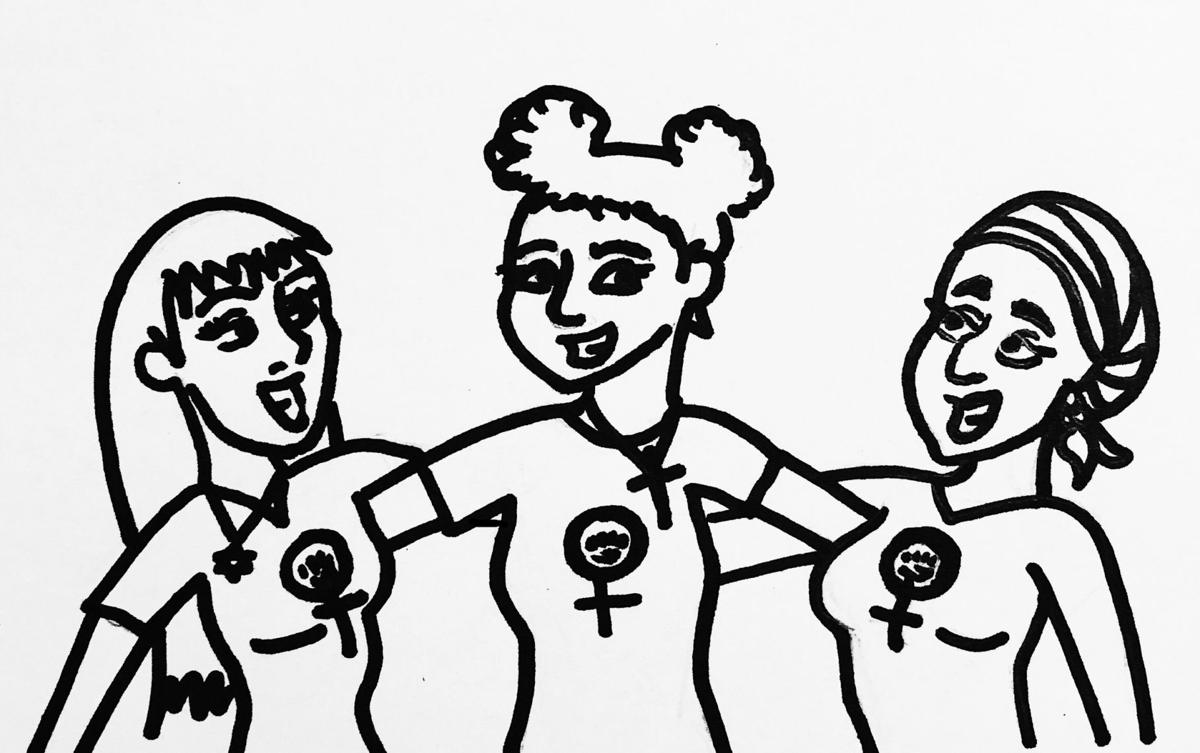 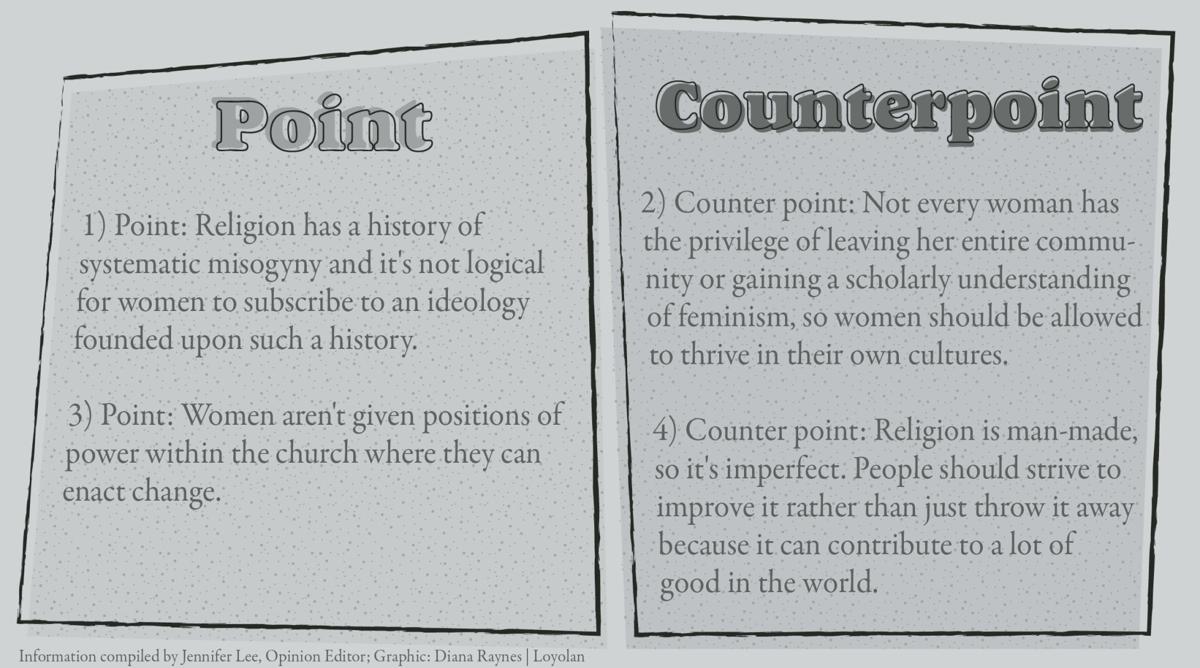 Can you be a religious feminist? Definitely not. I didn’t think so. A better question, I thought would be, how can any feminist consider themselves religious? Several months ago, I was confident that feminism was impossible to reconcile with nearly any widely-practiced religion. It wasn’t until I enrolled in Women and Religion, a class taught by theology professor Tracy Tiemeier exploring women’s roles in a majority of the world’s beliefs, that I was thrown for a loop and forced to rethink my answer.

Let’s travel back to 2007 and meet my younger self. Like most young children in the Mormon faith, she thinks it’s normal and even sanctified for her church to only allow male bishops, prophets and apostles. It’s especially normal for there to be only a male God. She thought it was normal for women to simply oversee the children and the other women. She was told through subtext and scripture that men have a higher calling from God; men are made in his image, and women are the other.

It’s never spoken explicitly. In fact, it is described as an equal-gender complementarity. The Family Proclamation, a statement released and taught by the Church of Jesus Christ of Latter-day Saints, asserts that men are ordained by God to preside over and provide for their families, while women are “primarily responsible for the nurture of their children.”

As a young teenager, I began to take notice of the discrepancies in the expectations and freedoms allotted to each gender. One story in particular, told by my favorite Sunday school teacher, stuck with me.

She gave up a promising career as a broadcast journalist, a path projected to the Today Show, in order to stay at home to raise her children. She claimed divine intervention told her to make such a decision, but I have a feeling it was more along the lines of peer pressure and societal obligation. It wasn’t like her husband had any pressure on him to give up his career, which was less promising than hers. My own father has told me repeatedly that he and his first wife felt forced by their community to marry and have kids as soon as possible, and he has always regretted it. Let me say that I know many women are interested in being mothers and want this lifestyle, but what upsets me is the pressure placed on so many women who don’t.

When I arrived on the first day of class, I was confident in my belief that religion tends to strip women of their potential and pigeonhole them into one way of being. And, at first, this class only confirmed my belief. Tiemeier informed our class that during the early stages of Christianity, women had roles as priestesses and apostles. When the religion was subsumed by the Roman Empire, customs of restricting women to the domestic sphere became Biblical.

A book chapter by Lucinda Peach entitled “Women and Christianity” states how, during the middle ages, Christian women would join nunneries to avoid marriage and bearing children because it was the only alternative. If women went unwed, they would be ostracized by society; so they had to choose between marrying man or God. The documentary titled “The Burning Times” (1990) depicts how during the reign of the Inquisition—a group of institutions within the Catholic Church that sought to sift through any heresy—nearly nine million pagan women were killed under the credence that they were witches. Any women who practiced ceremonies or traditions outside of the Church’s had certainly made a pact with the devil.

Present-day women in the Mormon church are told they are men’s better half, but this statement is filled with hypocrisy. If women are better, why can’t they lead the church?

Despite my persistence, I was unable to see how a feminist could turn a blind eye to this history. Then we read “The Why and What of Christian Feminist Theology” by professor of theology Sister Anne Clifford, which describes three types of religious feminists.

One in particular, called the revisionist feminist, seeks to take her practiced faith and end all internalized misogyny within it.

In my own ignorance, I overlooked the answer sitting right in front of me. The answer is God. The answer is strength, fortitude and action. These women love their relationship with God and with their communities. Their whole lives are governed by their relationship with this great being and his disciples. It is naive to assume that many women, feminists or not, would want to throw away a good thing because it has flaws. Religion is man-made and inherently imperfect. Many revisionist feminists recognize this and have taken it upon themselves to correct the mistakes of society.

“Rebel against the patriarchal traditions of Christianity while still keeping your faith, because it’s the interpretations that have everyone twisted,” said Nicole Rosenbach, a senior English major and classmate of mine.

For class, we read the autobiography “The Dance of the Dissident Daughter” by Sue Monk which details her journey from a devout Baptist to a neo-pagan and back to Christianity. After having her “feminist awakening,” Monk realized that her time would be best spent helping change the restrictive nature of her first religion. She wants other women to see their potential. The editor of “Women and Authority: Rethinking Feminism and Mormonism,” Maxine Hanks had the same experience returning to her church after leaving it for its misogynistic practices.

I also realized that many women don’t have access to the same education that I do on this campus. My own mother, an educated Mormon woman, was shocked when I told her the history of the early transformation of Christianity. It is a privilege to learn, and it is a privilege to leave. Many women would be ostracized by their communities if they left. Megan Phelps-Roper, the granddaughter of the infamous Westboro Baptist Church minister Fred Phelps, has been very public about how her family disowned her and her sister after they decided to stop practicing.

To me, feminism means taking action. For these women, it means standing up for their right to exist in the religious sphere. I humbly stand corrected.

This is the opinion of Jennifer Lee, a senior screenwriting major from Sacramento, California. Tweet comments to @LALoyolan email comments to jlee@theloyolan.com.

Jennifer is a junior screenwriting major and journalism/women's studies minor from Sacramento, California. She wants to open up a bakery when she retires and she once punched Lea Michelle at a Glee concert.