You are the owner of this article.
Edit Article Add New Article
You have permission to edit this article.
Edit
NEWS
OPINION
LIFE+ARTS
SPORTS
THE BLUFF
CARTOONS
SOCIAL JUSTICE
VIDEOS
CORONAVIRUS
PODCAST
SPECIAL ISSUES
MORE
1 of 5 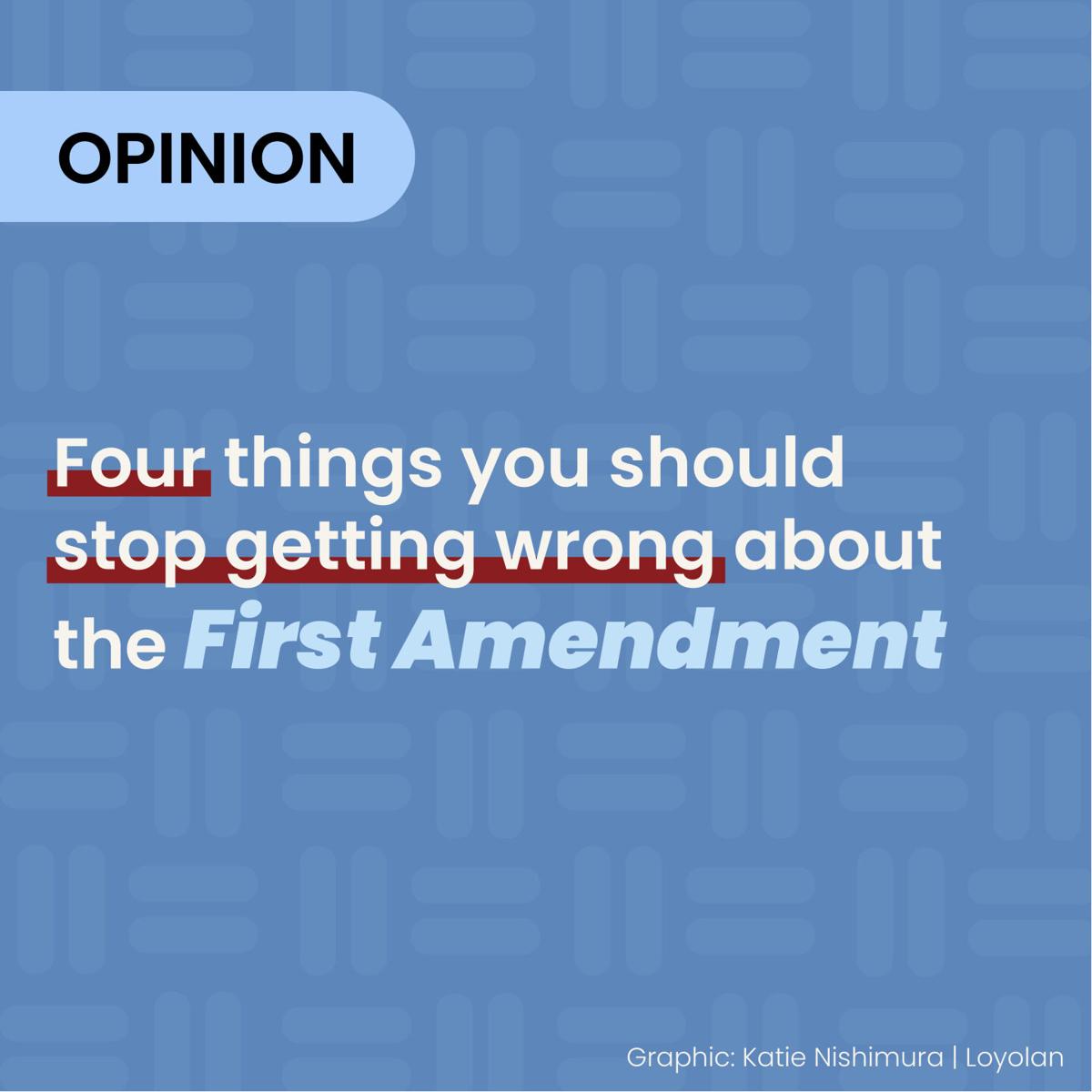 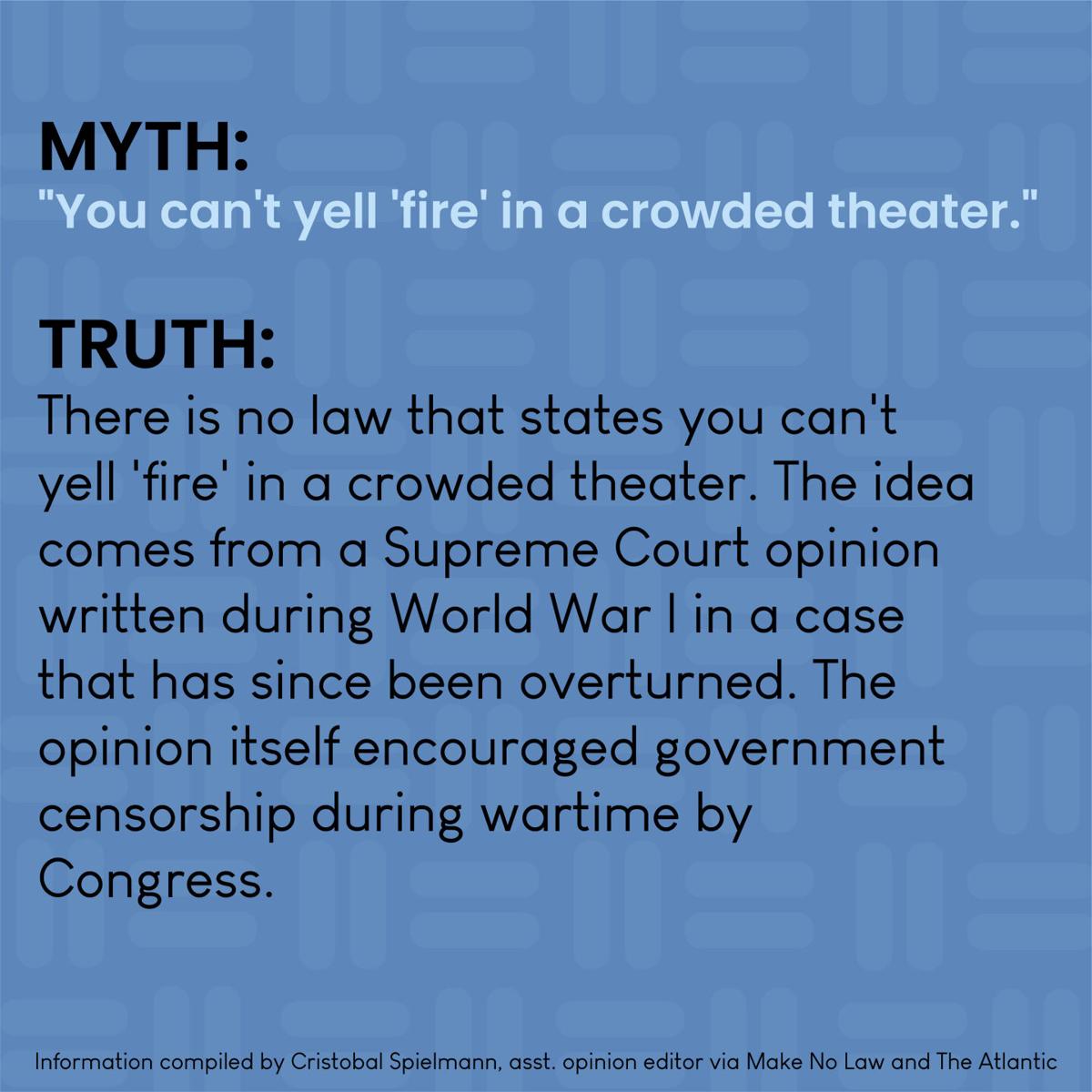 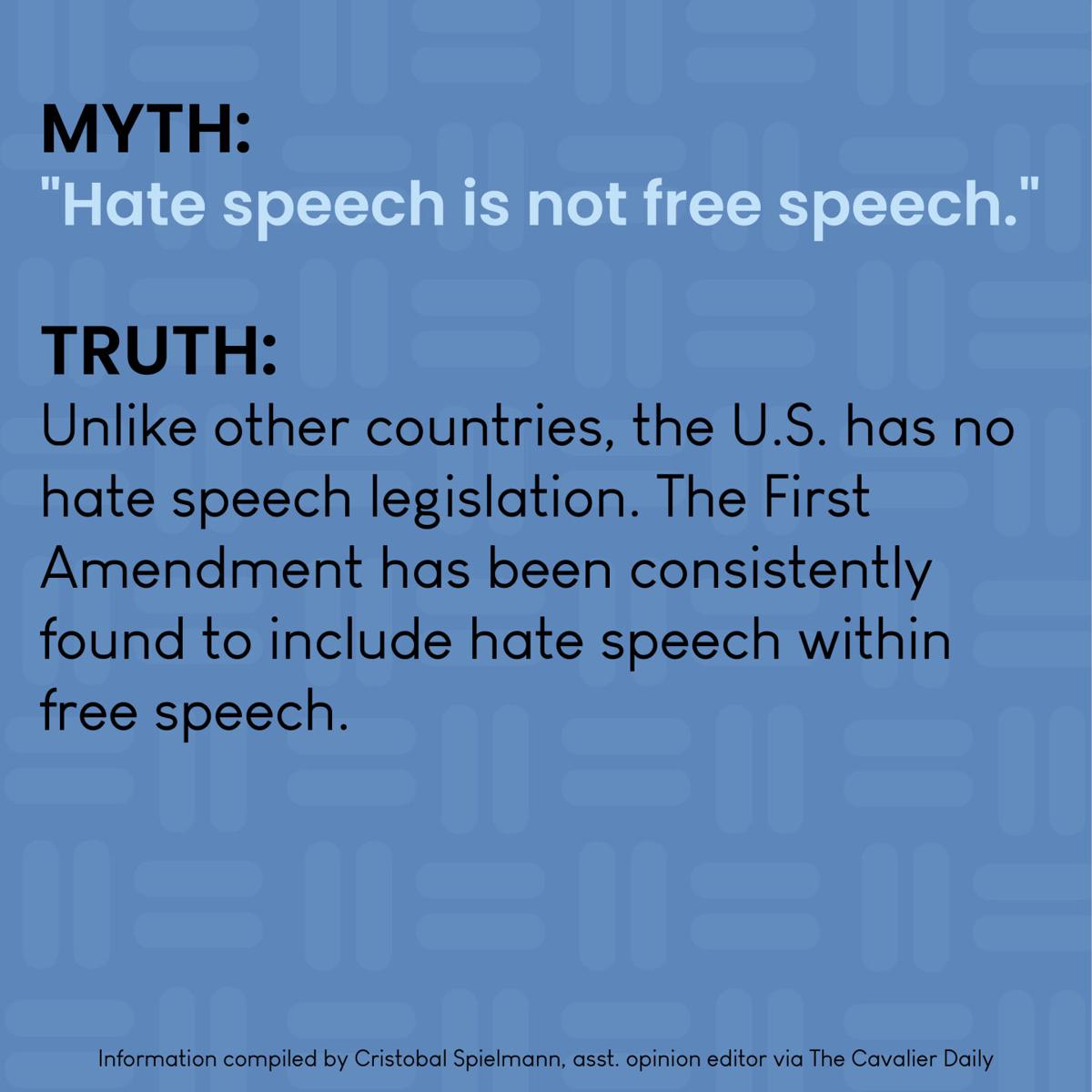 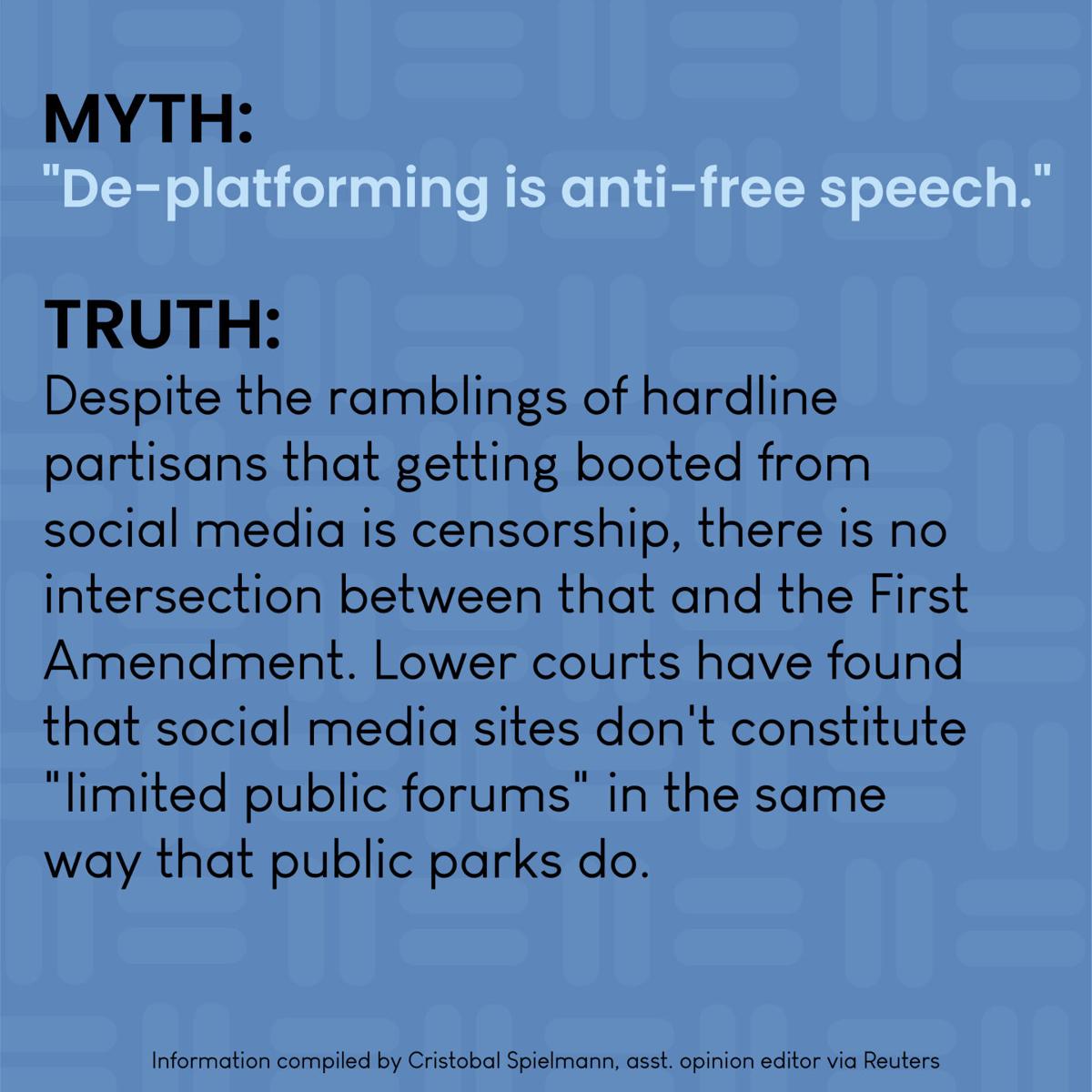 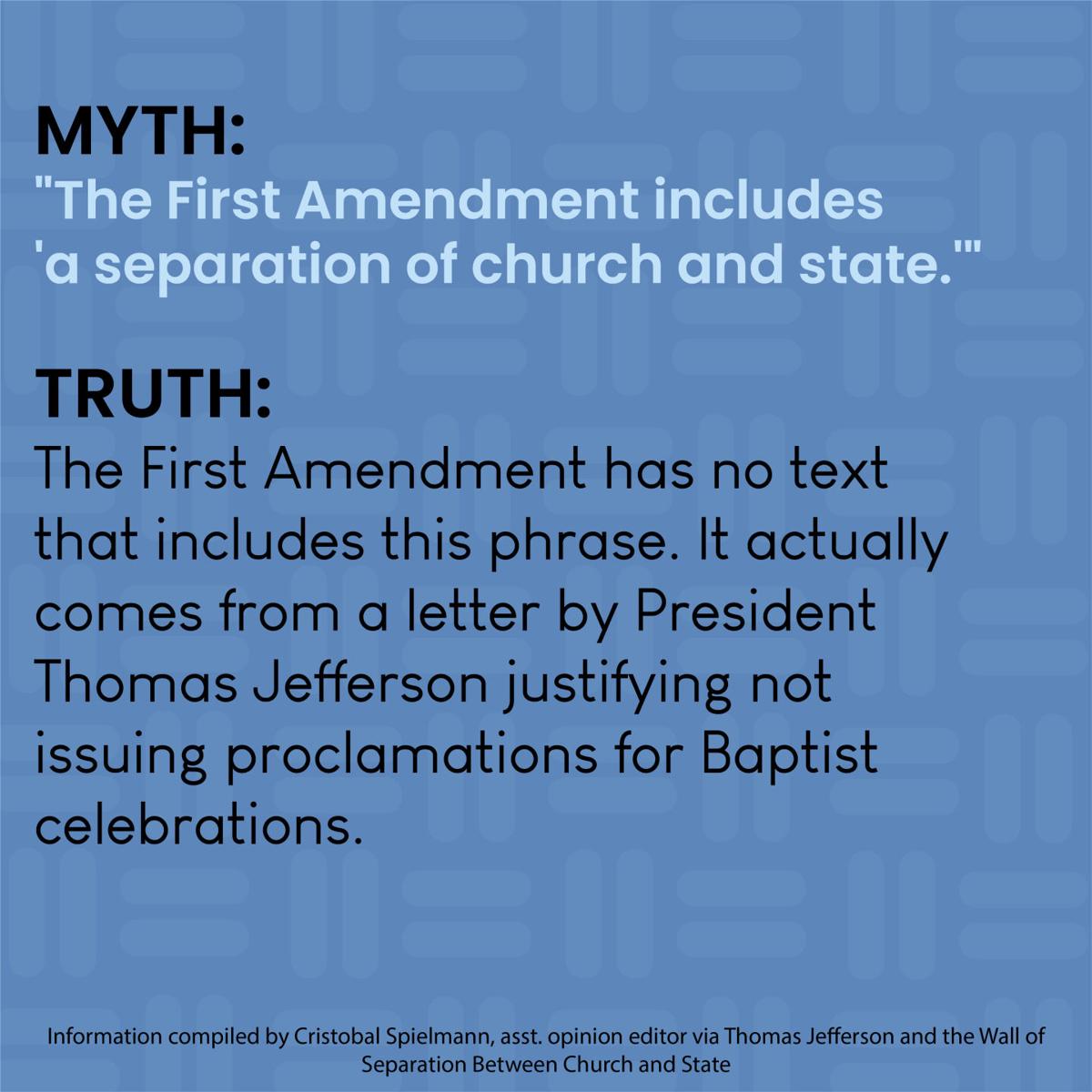 This phrase is often used by people when presenting an example of a sensible restraint on the First Amendment; I admit I'm guilty of saying this mantra in the past. When I attended Hate in America: Bridging the Political Divide hosted by Carol Costello, CNN anchor Wolf Blitzer also repeated this common saying when talking about the First Amendment. You've probably heard it from your teachers or on TV and accepted it as fact yourself.

In essence, the idea goes that yelling "fire" in a crowded theater when there is no fire to intentionally cause a commotion would not be protected by the First Amendment over the damages that it could cause, maybe in a trampling. However, the origins of that phrase point toward an accidental pro-censorship argument rather than a moderate's guide to free speech.

According to the Freedom Forum Institute, the group behind the now-closed Newseum, the phrase originates from a Supreme Court opinion written by Justice Oliver Wendell Holmes Jr. during World War I regarding the distribution of anti-draft leaflets. The opinion itself says that the government can limit speech during wartimes if it presents a "clear and present danger." It has nothing to do with starting false emergencies. The infamous phrase was inspired, in part, by the Iroquois Theater Fire. As First Amendment lawyer Ken White pointed out on the podcast "Make No Law," it was preceded by various government attempts to silence opposition during the war, like the Espionage and Sedition Acts, and the overall opinion that Congress could silence speech in danger was vague at best.

In any case, the opinion has no legal bearing on us today, since the case was overturned during the 1960s. However, this doesn't mean that there aren't any limits on the First Amendment today if you go looking for them; they're just not that exciting.

The limits that do exist are those that break other laws and aren't government-enforced speech. For instance, you can't publicly upload an entire Spider-Man movie to YouTube and claim it's free speech since that would be copyright infringement first and foremost. Threats are another example of unprotected speech, as is illegal pornography. Your right to assembly, one of five within the First Amendment, is limited by its peacefulness. Surprisingly, though, animal cruelty used for religious purposes is protected under the First Amendment and has been since the nineties.

On the other side of the debate and unlike situations like copyright infringement, you have unlikeable speech that is protected by the First Amendment: hate speech. While other democratic countries like Canada and Germany do have hate speech laws, the U.S. has no such laws, and Supreme Court cases like R.A.V. v. St. Paul do protect hate speech as free speech. The case that overturned the aforementioned "fire in a theater" case also defended hate speech.

In a recent opinion article for The Cavalier Daily, the centuries-old student newspaper for the University of Virginia, opinion columnist Emma Camp wrote about how defending the First Amendment necessitates defending others to have the right to say hateful things. This was in response to discussion over the university's Young Americans for Freedom (YAF) chapter putting up a mock Berlin Wall to bemoan modern "tyranny" such as statehood for D.C., Reddit and "fear of [COVID-19]."

Camp herself self-identifies as a liberal, and while she recognizes that the First Amendment can be used by bigots, she also accurately states that the alternative of having conditional civil liberties is a far worse scenario.

A major part of celebrating the First Amendment is the fact that the amendment is guaranteed to all Americans, whether or not we find their use of speech objectionable. That could mean burning the American flag, lampooning televangelists as drunkards or yes, hate speech. Even in situations where I've criticized dangerous groups like anti-vaxxers and suggested counter-campaigns in the name of truth, I've never suggested taking away their voices. Camp's article fully and truthfully recognized the reality of the First Amendment, and I'm glad it was published just in time for our University's celebration of our freedoms.

After former President Donald Trump got booted from popular social media platforms like Facebook and Twitter for inciting an insurrection on the Capitol, many were ready to call this action censorship. This sentiment has found a surprising amount of unfortunate bipartisanship in spite of most notably impacting such a divisive figure.

On the right, you have conservative German Chancellor Angela Merkel saying that Trump's de-platforming gave the powers of controlling free speech to companies rather than legislators. Insurrectionist supporter Sen. Josh Hawley (R-MO) now wants to clamp down on tech companies for supposedly silencing conservatives like Trump. Even before Trump's ban, other right-wingers were supporting the argument that big tech censored conservative thoughts, from the anti-science, L.A.-based propaganda network PragerU to the anti-abortion group LiveAction. The latter actually shared its fearful handouts about big tech at a YAF event on our campus in 2019.

The problem with this analysis on both sides is that there is no direct conflict between the First Amendment and someone getting kicked off a social media site, no matter how important they are. Facebook, Twitter and YouTube are all private companies with their own terms of service that you agree to when signing up; they are free to kick you off their platforms for violating that agreement. All the First Amendment says is that the federal government can't stop you from saying whatever you want on those sites. If you're annoyed with any of these sites' rules, there's nothing stopping you from joining or creating a new website that fits your needs.

I recognize that this is a realization that I have evolved from previously asking the government to regulate tech companies that host extremist content. I now understand that to be overly regulatory, anti-free speech and would hurt the way the Internet has worked my whole life. Tech companies can certainly do more to combat white nationalists and other forms of extremism, but they don't need new laws or old protections revoked.

Overall, de-platforming is far from comparable to being kicked out from speaking your mind in a municipal park since the park is a "limited public forum" and free from government censorship. PragerU actually lost its quixotic lawsuit against Google for this very reason back in 2020.

For a non-online example, this same principle applies to Sen. Hawley's meltdown over his book not getting published by Simon & Schuster. It is neither "Orwellian" nor a "direct assault on the First Amendment" for a company to cancel a Republican senator's book deal because they supported an attempted coup. All the First Amendment guarantees is that the government can't censor what Sen. Hawley wants to say in his book, and it can't force a private company to publish it any more than I can force any newspaper to carry my opinion pieces.

1. "The First Amendment includes 'a separation of church and state.'"

Like "fire in a crowded theater," this phrase is often used when talking about what the First Amendment protects, specifically the freedom of religion. Ron Reagan, son of President Ronald Reagan, invoked the phrase in his infamous Freedom from Religion Foundation commercial, and you may have heard this phrase when talking about the intention of the Amendment.

However, this phrase is nowhere to be found in the text of the Amendment. What the Amendment actually states is that "Congress shall make no law respecting an establishment of religion, or prohibiting the free exercise thereof." So where does the idea of separation come from?

President Thomas Jefferson actually came up with this idea of a "wall of separation" in a letter to a Baptist association explaining his reasoning for not issuing proclamations for religious celebrations. Jefferson quotes the First Amendment in this letter, but the letter itself has no legal weight.

This distinction might seem trite or nitpicky compared to the previous misconceptions, but it's vital that people get this distinction right. When we talk about the First Amendment, what are we really talking about? We're talking about the text that guarantees the five rights of expression, not the letters of a founding father that couldn't predict where we'd be hundreds of years later. The former is what court cases are actually decided by and what we should celebrate this week.