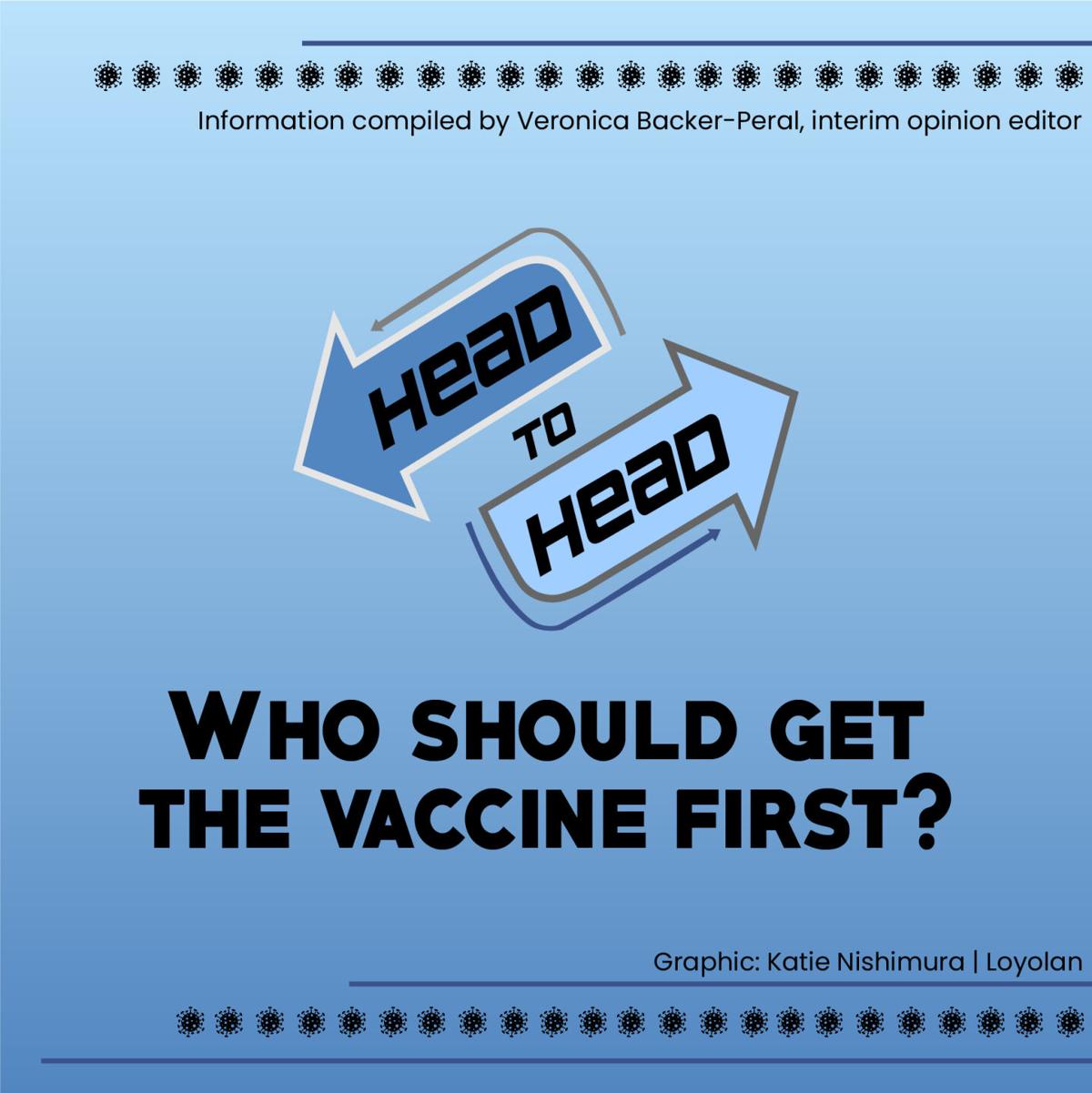 Currently, in L.A. County, distribution of the highly sought-after COVID-19 vaccine is limited to those who are 65 years or older or so-called frontline workers, according to the California Sun. The discussion of vaccine waitlists and tiers has provoked the debate over who should get top priority in the vaccination campaign in order to get communities back to a state of somewhat normalcy. Should L.A. County and others only look at vaccinating the elderly for now, or should essential workers get vaccine priorities instead? Asst. opinion editor Cristobal Spielmann and interim opinion editor Veronica Backer-Peral go head-to-head on the vaccine distribution debate.

There should be no doubt in deciding to vaccinate the most vulnerable members of our community: the elderly. By allocating vaccine distribution by profession, there's far more wiggle room for professions to lobby and fight for higher tiers in the vaccine pecking order.

Just as a recent example of how the career protection argument could be abused, L.A. Mayor Eric Garcetti broke his promise of jumping ahead of the line for his first dose of the vaccine, supposedly because of his "close contact with clients." Even if it was just politics that got Mayor Garcetti the vaccine, what's to prevent unions and groups lobbying for preferential treatment over each other?

The University stated in a Jan. 13 community advisory that they were in talks with L.A. County to speak up for faculty and staff who might have "an increased risk of exposure." After all, why, in the current L.A. County set-up, do acupuncturists and chiropractors get higher priority than teachers and professors who work with far more people? The current distribution method based on careers first is illogical and will only lead to more infighting and pleading to get vaccines over the truly risk-prone.

If L.A. County just focused on vaccinating the most vulnerable among us first, that being those older than 65, lobbying and political interference would be less powerful in waiting their turn, and the most heart-wrenching impacts of this pandemic might be stopped earlier.

Faced with the difficult situation of a large demand for the COVID-19 vaccine and a limited supply, the CDC must prioritize the plan that most effectively limits transmission and mortality — vaccinating essential workers first. The primary reason is that the rest of us are able to stay at home, frontline workers are not.

There are currently 87 million essential workers in the United States, 61% of which are at increased risk for severe COVID-19. These include first responders, farmers and grocery store workers. Many don’t have the option to work remotely and often interact with dozens, even hundreds, of people every day. Moreover, experts have show that these workplaces are “hot zones” for viral transmission. Reducing infection rates amongst those workers is the best way to avoid further infection of the rest of the population.

As for the rest of us, we have the option to stay at home. In fact, given that the vaccine efficacy rate drops to 57% in some cases of the South Africa variant, it is starting to look like social distancing regulations may need to remain in place even for those who have been vaccinated. Offering the vaccine to the general public may give individuals a false sense of confidence, leading to more transmission rather than less.

This is not to say the general population should not get vaccinated. The vaccine is still by far the most effective tool we have to halt the virus. However, it will be most effective if it is distributed first to those that have no other option but to interact with others, and later to the rest of the population.

Veronica is a junior triple major in history, computer science and applied mathematics. She loves long talks about politics, amateur flying trapeze, and getting 8 hours of sleep (almost) every night.