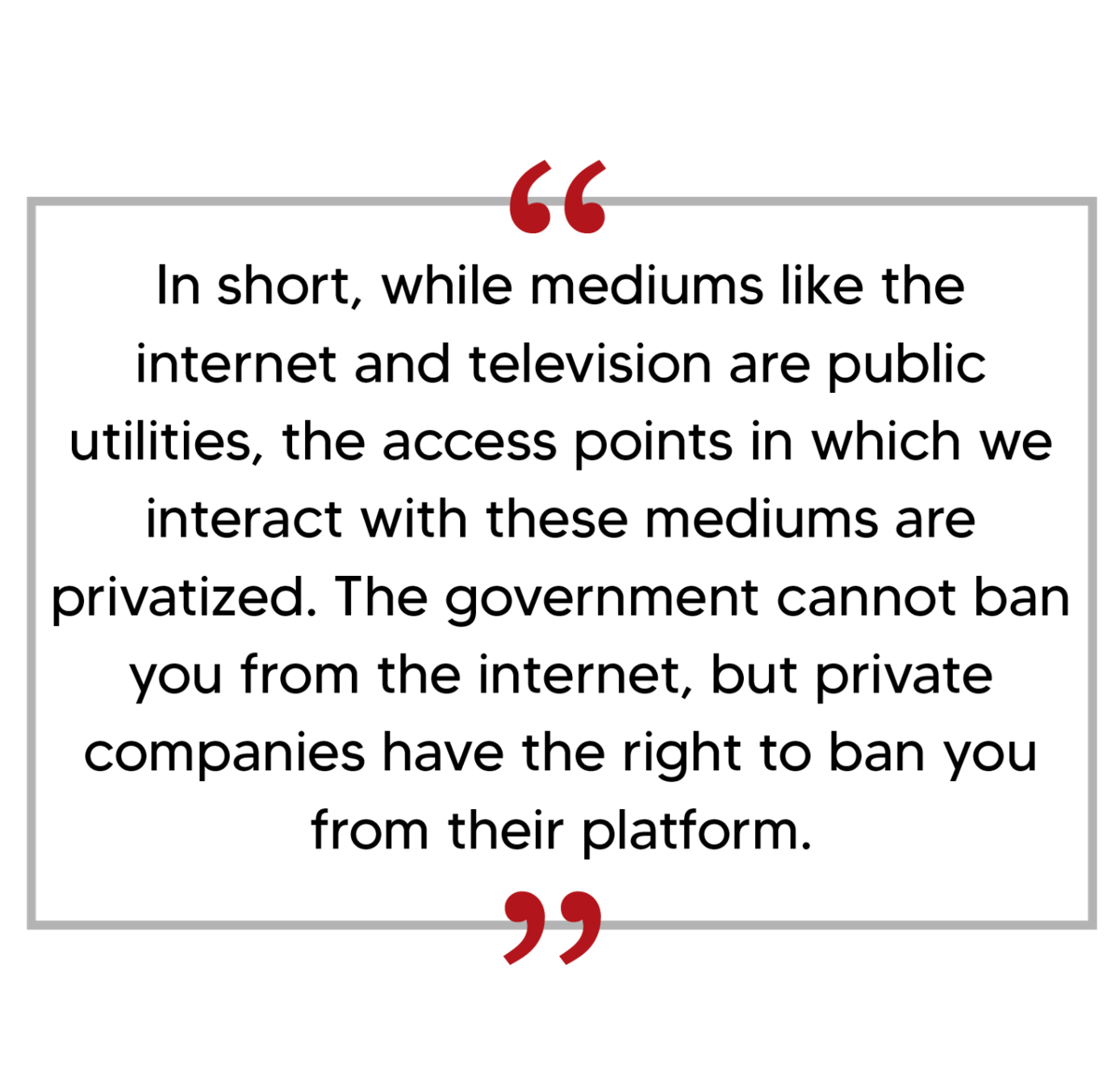 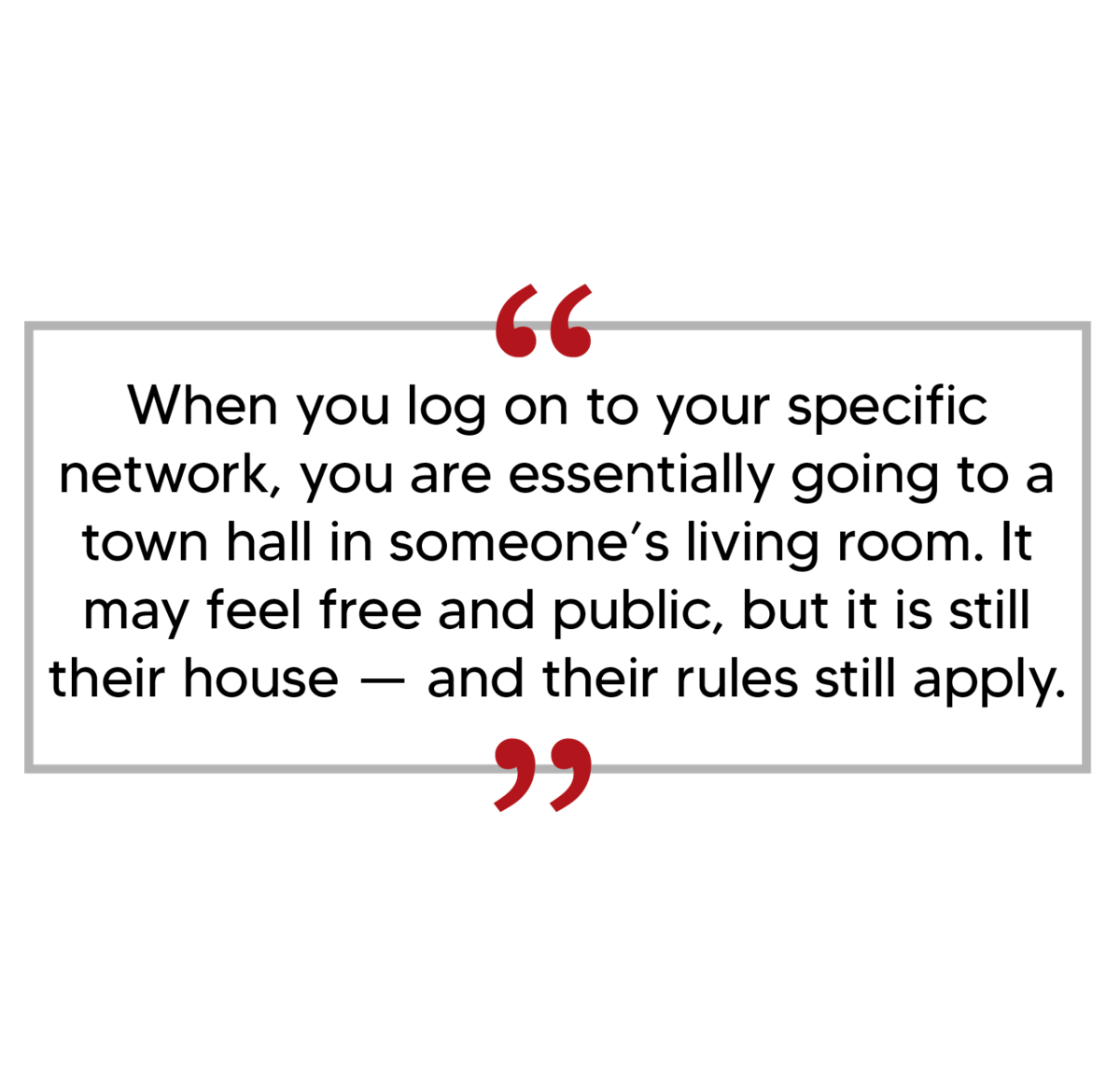 Parler, a self-proclaimed “unbiased social media” platform, has become a somewhat haven for conservative figures who feel silenced on other platforms.

However, the app has faced some recent trouble. Amazon Web Services (AWS), Parler’s host, said that they recently reported 98 posts that they claimed “encourage and incite violence”, a violation of the service’s terms. Parler’s refusal to comply with these terms of service, AWS argued, is what caused the business to remove it from its service. The decision came after Apple and Google removed the app from their stores, citing similar reasons.

This decision has led to an uproar of concern about free speech on the internet from people of all ideologies.

As it stands, social media platforms are not public forums. This could change, but for now, they are privatized. The first amendment protects you from the government, not from private companies. When a company like Parler refuses to adhere to its hosting service’s terms of service, the host has the freedom to dole out repercussions.

The debate of the public forum has been playing out in the Supreme Court for years, and the general consensus has remained that these private entities are allowed to monitor and regulate the language shared through their mediums. The 2019 Supreme Court decision of the Manhattan Community Access Corp. v. Halleck ruled in favor of conservative justices, with a majority opinion written by Justice Brett Kavanaugh, deciding that “private operators of public access channels are not state actors and therefore are not subject to constitutional liability,” according to Oyez.org.

We must note that the irony of the current social media debate is not lost. The conservative goal of upholding the lack of government regulation on private entities (for both individuals and companies) in the country is one of the main reasons we have ended up in this predicament.

In short, while mediums like the internet and television are public utilities, the access points in which we interact with these mediums are privatized. The government cannot ban you from the internet, but private companies have the right to ban you from their platforms. Furthermore, every user agrees to follow terms of use and community guidelines when signing up to have a social media account, and apps that are hosted on larger web services, like the situation with Parler and AWS, agree to terms and guidelines.

When you log on to your specific network, you are essentially going to a town hall in someone’s living room. It may feel free and public, but it is still their house — and their rules still apply.

The platforms through which we communicate are consistently and rapidly changing. There are countless ways to publicly share your thoughts and feelings, and the soapbox has gone extinct. While there will always be a need for free and open speech in a democracy, we may never get to a point in which social media platforms can provide that service. The current debates have cornered us into a paradoxical understanding of free speech and our rights. Oftentimes we forget the nuances of the amendment that allows us to feel the most free. To truly solve this problem, we should first try to understand what we are actually asking for and understand the possible repercussions.

So where does that leave us? As journalists, we are about as first amendment-loving as Americans can get, but we also value the importance of using speech and language responsibly. Over the past few years, we have witnessed the dangers of irresponsible speech and the scary repercussions that can come online and off. Social media strongholds like Twitter and Facebook will continue to exist as privatized platforms for information and thought, allowing them to support or silence certain viewpoints.

It would be naive to not acknowledge how the far-right navigates these platforms going forward. Though Parler has been removed from the app store, those who want to spread far-right ideology will always find a way to do that. Shifting our focus to the social media giants like Twitter and Facebook and how they handle hate speech and violence is the most important next step. Holding these major platforms accountable is the most effective way to stop the spread of mass violence and possibly prevent another event like the one that occurred on Jan. 6.

Molly Jean Box is a junior journalism major from Boulder, Colorado. Her favorite part of working for the Loyolan the free pizza. In her free time, she likes to think about the Loyolan.

Grace McCauley is a junior journalism major from Evanston, IL.

So if Parler being targeted and censored by private companies is A-okay then Christian bakeries should be free and clear to serve whomever they please, right Democrats? They're private companies after all. Gays can always go open their own bakery if they have a problem, right? Naturally you'll agree rather than be hypocrites I'm sure.