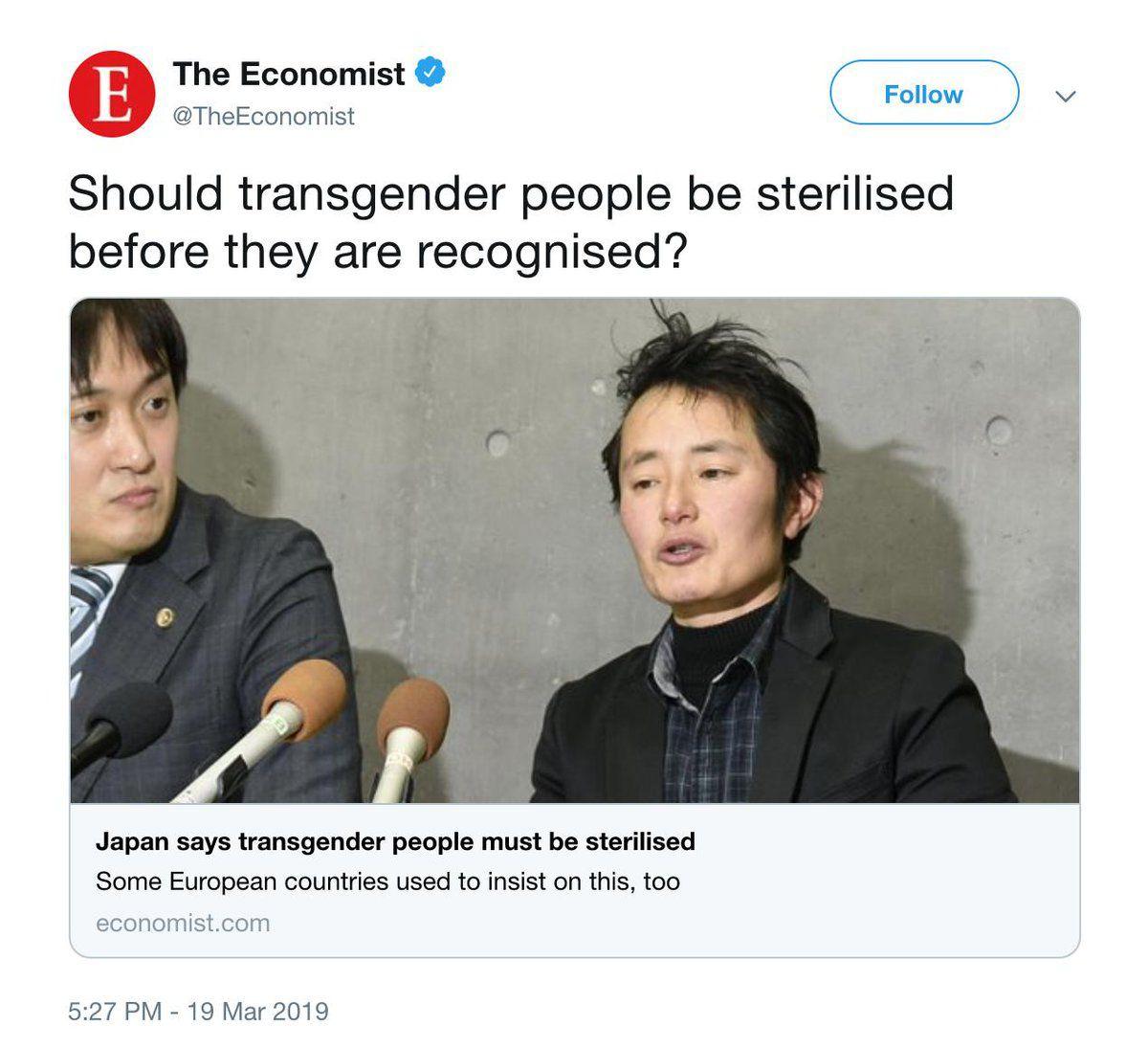 An earlier now deleted tweet made by The Economist earlier this month shows irresponsible titling aimed to be shared on social media. 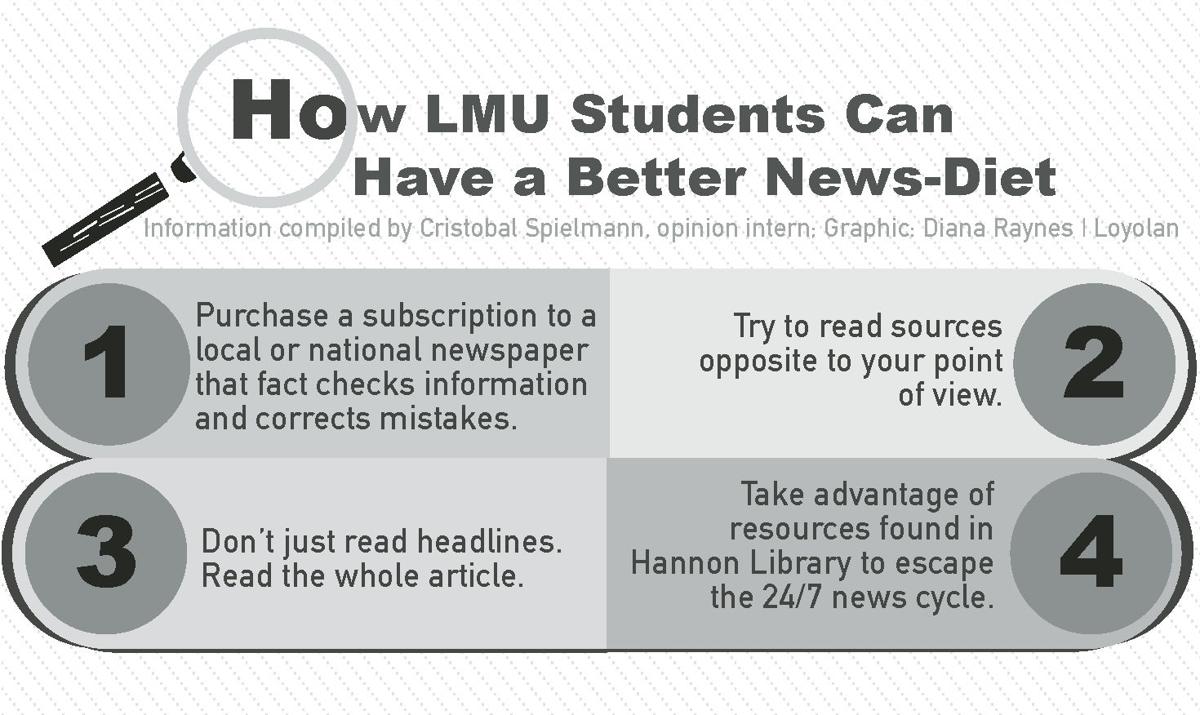 An earlier now deleted tweet made by The Economist earlier this month shows irresponsible titling aimed to be shared on social media.

The Economist published an article on March 14 titled, “Japan says transgender people must be sterilized.” The article discussed a Supreme Court case in Japan that deemed requiring irreversible sterilization surgery for transgender individuals to be constitutional, and the response of liberal Japanese activists and municipalities defended transgender rights.

However, that was not the impression many got when The Economist's twitter account posted the article with the caption, “Should transgender people be sterilized before they are recognized?” which was the attention-grabbing lead question in the article. The account soon realized its mistake, pulled the tweet and reposted the article in its intended context.

This tragic incident brings to light an issue many students at LMU need to combat: how to become better consumers of the news.

Like many students, I unfortunately get most of my news diet from social media, mainly Twitter. Of the 21 fellow students in the University Honors Program I contacted, 13 said the most common way they got their news was social media.

“A lot of the times, Twitter is where I get most of my information,” said freshman communications major Yazmine Ocampo. “Whenever people find out things, I think it’s usually through Twitter.”

On one hand, the advent of social media as a news source can help deliver important information at the fastest speed possible, and the reports from every-day people at the site of a protest or parade bring first-person accounts center-stage without the need for a national platform.

Unfortunately, a reliance on social media as most of our news diet has more than enough downsides.

As the Washington Post highlights, the business of journalism isn’t just making sure people click on eye-catching articles, it’s sharing articles writers know people will like. Shareable articles, ones ripe for spreading on social media with quippy headlines and attractive topics, can draw more media traffic from demographics that will consistently share a site’s content.

That can give way to explicitly catering to those audiences on social media rather than reporting what needs to be said. This explains why fake news thrives online — fake news is absurdly shareable.

“Sometimes it needs to be spread, especially if it’s something really important,” said Ocampo. “But I guess it could be a bad thing because your instinct is to just retweet it rather than talk about the issue.”

These shareable issues can often blur the line for readers trying to understand if an article is an analysis/opinion piece or a news story, and can lead to people consuming only one or two sources that satisfy their own biases.

“I like to think I can [tell the difference]!” said freshman electrical engineering and computer science major Ian Green, “But I think most people say that and can’t.”

This is before mentioning the massive economic hardships newspapers have gone through as a result of social media, essentially delivering the news for free, with total revenue for U.S. newspapers going from around $55 trillion in 2007 to an estimated $27 trillion in 2017. Reliable news cannot survive in this environment.

So, what can a student at LMU do to end a poor news diet?

The best and most effective way to end a reliance on clickbait would be to purchase a subscription to a local and/or national newspaper publication you trust to fact-check information and correct mistakes. Not only are you making a conscious decision as a consumer to support more trust-worthy media, but you’re also being able to engage with topics on a more comprehensive level than you would with those with 280 characters.

Try to read or subscribe to a source with a different point of view than your own, if only to see what the other side is arguing, but also be free to keep your own opinions and try not to fall into an extremist wormhole just on the other side. Just because you’re reading National Affairs or The Nation does not mean you have to now start tweeting out Breitbart or Natural News articles.

Take advantage of resources on campus like the Hannon Library to better improve your network of sources from the 24/7 news cycle with archives and research preserved for the betterment of education. Look into opportunities the library holds like the recent Wikipedia edit-a-thon to improve sourcing and representation for one of the most important resources of the modern age.

Lastly, be sure to read the meat of an article before you share it with everyone you know. A headline is for your attention, not for reading.

This is the opinion of Cristobal Spielmann, a freshman environmental science major from Brentwood, Tennessee. Tweet comments @LALoyolan, or email editor@theloyolan.com.