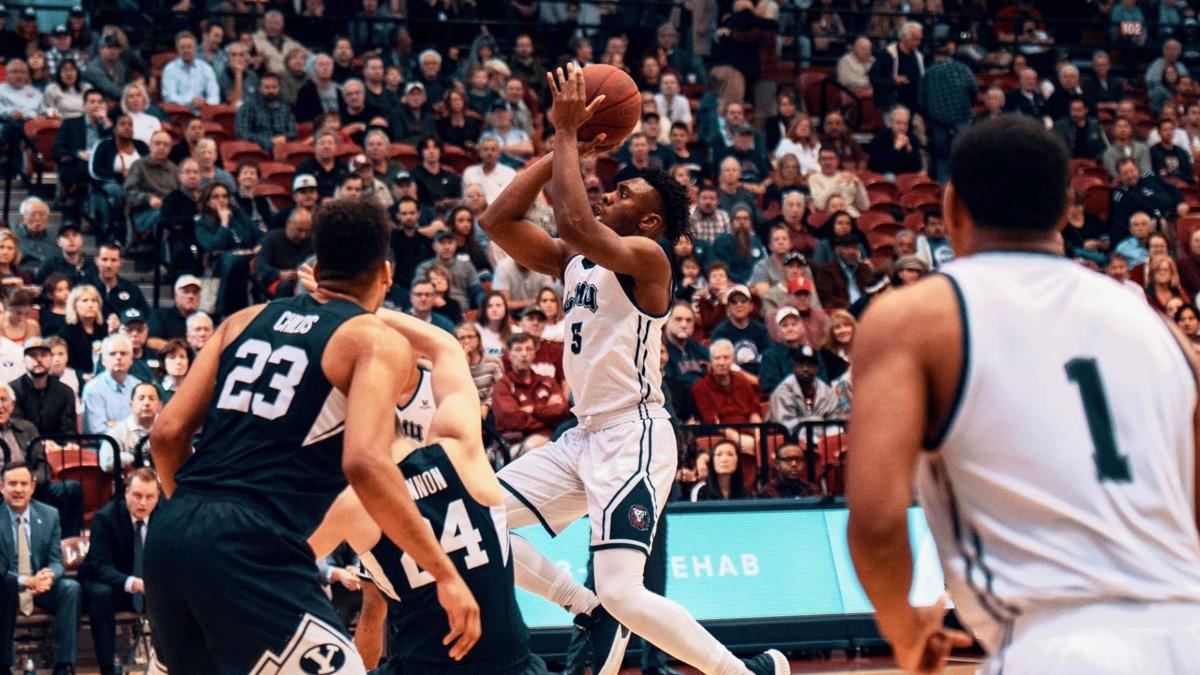 Senior guard James Batemon (5) was the top scorer in LMU's win over Brown over Brown on Monday night, scoring 21 points and shooting 4-8 from three point range. 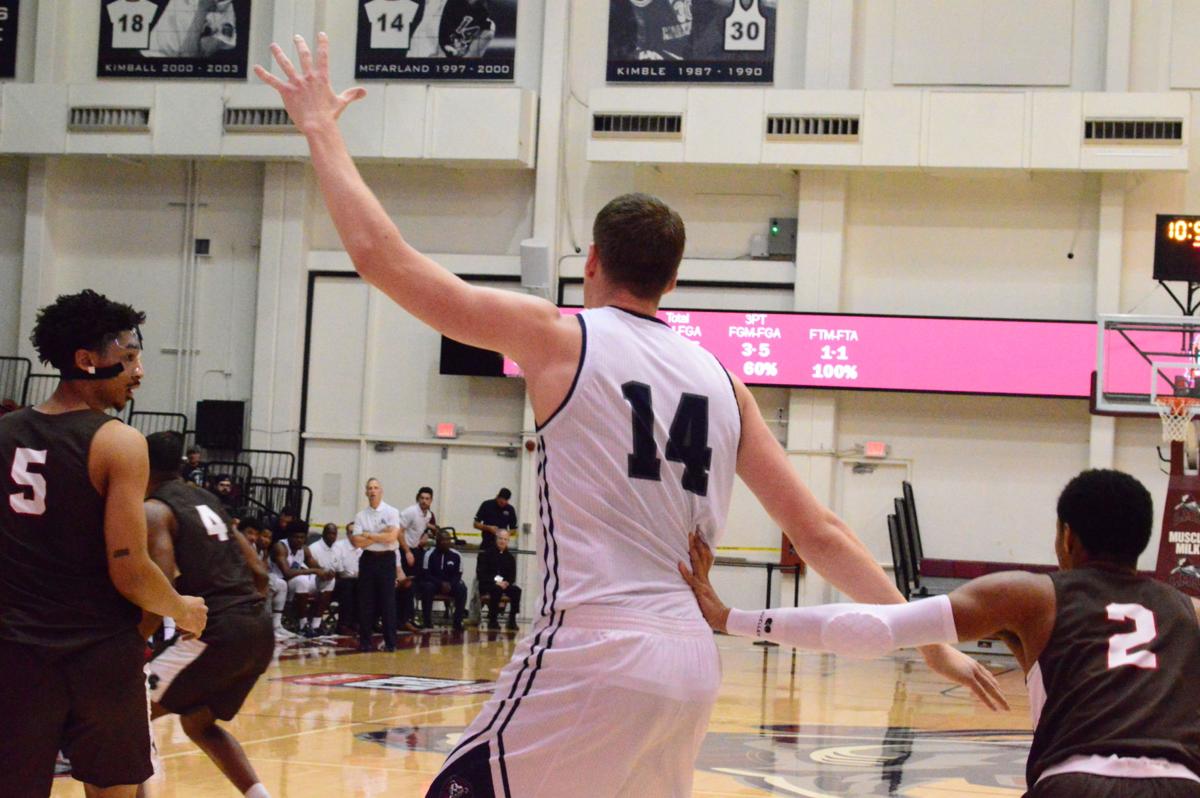 Junior center Mattias Markusson (14) has been one of the Lions’ biggest contributors this season, recording 27 blocks overall this season.

Senior guard James Batemon (5) was the top scorer in LMU's win over Brown over Brown on Monday night, scoring 21 points and shooting 4-8 from three point range.

Junior center Mattias Markusson (14) has been one of the Lions’ biggest contributors this season, recording 27 blocks overall this season.

The Lions (22-11 overall, 8-8 WCC) punched their ticket to the semi-finals of the College Basketball Invitational (CBI) on Monday night with an 81-63 win over Brown. The team will advance to face South Florida in a battle to reach the CBI Championships.

This victory is the 22nd win for the team and doubles the amount of wins from last season. This is the first season with a winning record in eight years for LMU. This win also gave the Lions the most wins in a season since the 1990 team, famously led by Hank Gathers and Bo Kimble.

Hank’s House welcomed the Lions back on Monday night with 657 in attendance to watch the Lions carry on their postseason run. The game, like much of this season, was led by the stellar Lions’ defense and the scoring prowess of senior guard James Batemon. Batemon’s 21 points led all scorers in the game and included four three pointers, five assists and two steals in the winning effort.

Last season’s disappointments fueled the team to come out this season and prove they could make an impact at LMU. Batemon in particular mentioned how last season’s struggles helped the team perform better this season.

“It shows the long journey we took,” said Batemon. “We had to struggle last year in order to succeed this year.”

The defense has been the team’s focal point and it was once again on display, forcing Brown to commit 20 turnovers in the game, with the Lions scoring 35 points off the forced turnovers. Although solid in the first half, it was the second half where the Lions' defense came alive. In the second half, LMU was able to hold Brown to only 41 percent shooting from the field and 27 percent from the three-point range.

With the Lions now in the semifinals of the CBI, the team is one of only 28 Division I National Collegiate Athletics Association (NCAA) basketball teams out of 351 still playing in postseason play right now. While not as prestigious a tournament as the NCAA tournament which occurs at the same time, this is a great accomplishment for a team that won 11 games only a season ago and a program that had not achieved  a winning season in eight years.

“It means a lot to play this far because with me being a senior, I’m not ready for it to be over,” said Batemon. “We’re just glad we got a second chance to play in the postseason and make the most of it.”

The last time LMU had a winning record at the end of the season was in 2012, when the team finished 21-13. The 2012 team also finished fourth in the WCC and experienced a quarterfinals loss in the CollegeInsider.com Postseason Tournament. The Lions' success this season is in large part due to the talent displayed on the roster, along with the stellar defense the coaching staff have built with this team.

Along with Batemon, the Lions also include key contributions on the offensive end from junior center and seven footer Mattias Markusson and freshman guard/forward Dameane Douglas. Markusson was the hero of the previous tournament game, converting the layup, drawing a foul and making the free throw in the final 31 seconds for the one point triumph over Cal Baptist.

Markusson’s size has been elemental all season long, as his 10.3 points per game rank second on the team and his 6.3 rebounds rank first. Along with his size being a factor on the offensive end with scoring and rebounding, his defense has contributed to one of the best defenses in all of college basketball.

Markusson’s 27 blocks on the season rank most on the team. One of the Lions’ defensive stars was Joe Quintana, whose pesky defense was able to account for three steals in the tournament win over Brown. Quintana trails only Batemon on total steals for this season, as Batemon has been the Lions’ lead on both ends of the court.

However, the leader and primary star of the Lions defense was the always dependable senior guard Jeffery McClendon.

McClendon, who also tied Quintana for the team lead in steals with three in Monday’s game, has been an excellent defender for the Lions for much of his career at LMU, often times taking on the most difficult assignments on defense this season. McClendon’s ability to make winning hustle plays, dive for loose balls and make key plays on defense has helped the Lions maintain the 62.7 point average they have held their opponents to all season long.

Grabbing 22 wins and a semifinals trip in the CBI tournament might not sound like an outstanding achievement when the rest of America is watching basketball powerhouses duke it out in March Madness, but what LMU has achieved this season is historic and should be an encouraging sign to the athletic department and to students that LMU basketball is not dead. This team is not the 1990 team, featuring a top 25 ranking and trip to the NCAA tournament regional finals, but this team was never expected to be.

Instead, they exceeded expectations, becoming LMU’s best basketball team since Hank Gathers and Bo Kimble laced up their shoes at Gersten Pavilion. It is unfortunate that not as many Lion fans could be in attendance in what could have been this historic team’s final home game.

If the program can find ways to replace the offensive production from Batemon as long as his and McClendon’s defensive contributions, this could be the start of new era in LMU basketball, heading up instead of down and ready to compete rather than rebuild.

This is the opinion of Miles Thomas, a sophomore communications studies major from Hermosa Beach, CA. Tweet comments to @LALoyolan or email comments to mthomas@theloyolan.com.