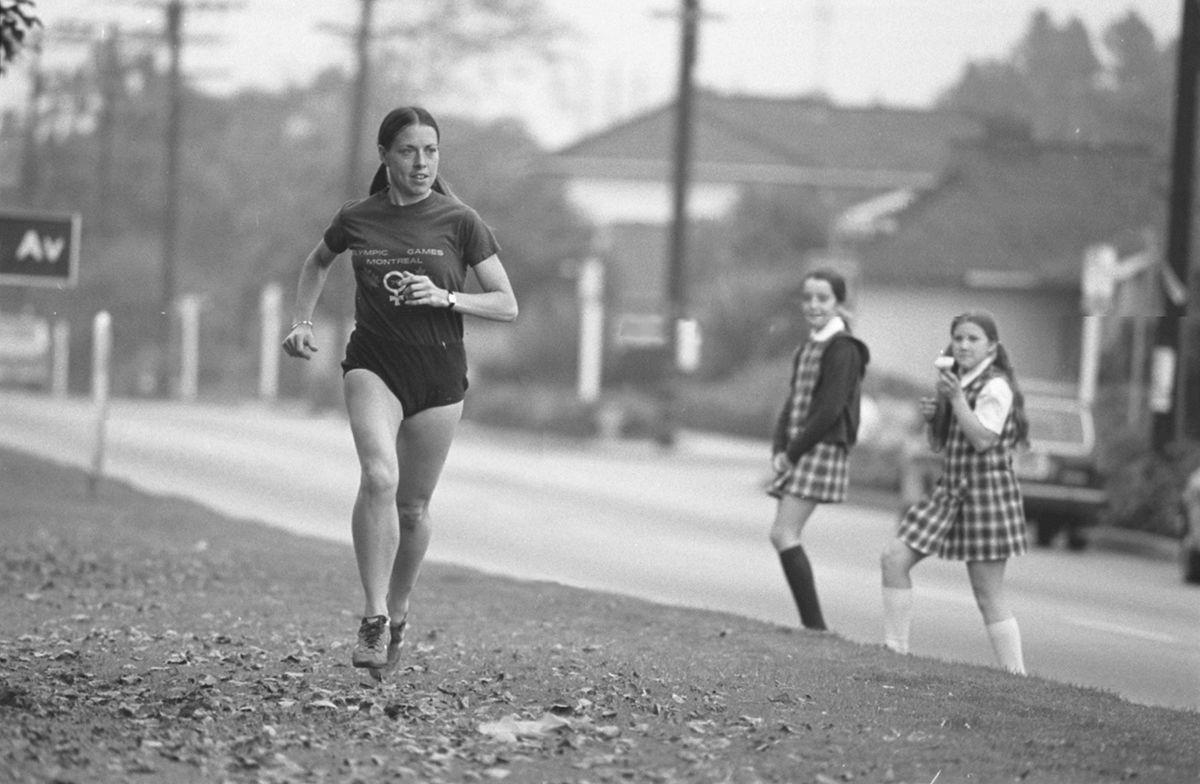 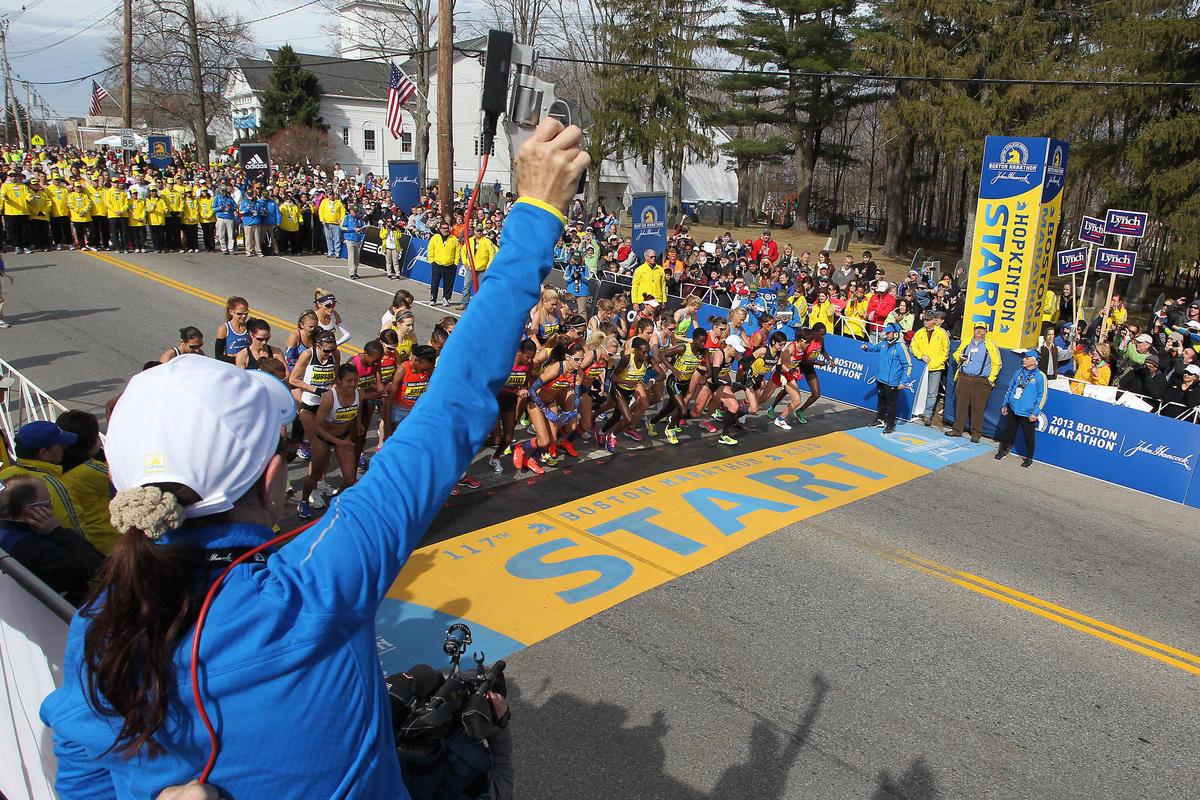 LMU buisness services coordinator Jacqueline Hansen shoots the starting gun at the 2013 Boston Marathon on the 40th anniversary of her first place win.

LMU buisness services coordinator Jacqueline Hansen shoots the starting gun at the 2013 Boston Marathon on the 40th anniversary of her first place win.

Born in Binghamton, New York, Jacqueline Hansen, LMU’s business services coordinator and program coordinator, and lecturer in the School of Education, moved across the country at age 8, where she has remained for the majority of her life. It was here in Southern California that she was introduced to track and field. Later in her career, Hansen also advocated for a women's long distance run in the Olympics.

Hansen began her running career during her senior year at Granada Hills High School. She remembers failing at other sports and hating P.E., until one of the P.E. teachers and coaches at her school started the first girls’ track and field team – something she said was “a stroke of luck.”

It wasn’t until a few years after high school that Hansen fell in love with the sport, upon meeting her “coach for life,” Laszlo Tabori, while racing for the San Fernando Valley Track Club. She said Tabori “was the nudge she needed to get going to take [track] seriously,” and she “completely credits him with making her the runner she became.”

In college, at California State University, Northridge, Hansen was working a full-time job, going to school and running.During college she began traveling for meets. Hansen ran and finished first in the 1973 Boston Marathon – a day she claims “launched her career” as a runner.

Prior to this race, Hansen was attempting to be the best “miler” – someone who runs a mile in the shortest amount of time. She was introduced to long distance running by her teammate and best friend, Cheryl Bridges, who was the first woman in history to break 2:50 (two hours and 50 minutes) at the Culver City Marathon. And after watching Bridges break 2:50 that Hansen thought to herself, “If she can do that, I can do that.” And thus, Hansen discovered her passion for marathon running, and after the Boston Marathon she realized she was “not a miler, but a distance runner.”

“That Boston Marathon totally changed my life," Hansen said. "After it, I started getting invitations, and nobody had ever invited me to run, all expenses paid, before."

In 2013, on the 40th anniversary of her first place win at Boston, Hansen went back  to shoot the starting gun. The 2013 Boston Marathon, as many know, tragically ended with a bombing.

“That was a joyous day until the bombs went off, and then that was the worst day. I had a lot of runners that I coached running that year and they wanted to be there to celebrate my anniversary and my honor. I wanted to be on the finish line to greet them coming in, and I was,” Hansen said. “Only one of them did not get to finish in time, all the others had been able to finish before the bombs went off. I never felt in danger but I was definitely too close for comfort.”

Despite being present for the disaster, Hansen still goes back to the Boston Marathon as often as possible and is going back this April.

“I go back as often as I can ... They treat their past winners like a king or queen for a day. I don’t even go to my high school reunions, but those are my reunions — we all say that all of the former winners,” Hansen said.

In Hansen’s eyes, running is a sport “you really have to love to do.” For her, it was never a chore. In fact, it was almost always a time for her to find peace in the solitude.

“Running was always my alone time, my meditation time; it just felt good. My late husband said, and I never forgot it, ‘It’s like she sings when she runs,’ and if you look at a lot of my running pictures, everybody said I’m always smiling when I finish.” Hansen said.

Although accomplished in her event, Hansen was never able to participate in the Olympic Games due to the fact it was not a woman’s event until 1984. It was Hansen and a team of other activists who pioneered getting a long distance run into the Olympics, something she said she’s “more proud of than any world record.”

Hansen held the world record twice from 1974-1977 and was number one in the world, but an Olympic Games “came and went without [her] event.” Although frustrating, this was motivation to begin fighting for women’s opportunity to run a marathon in the Olympics.

“The 1976 Montreal Olympics shoulda-coulda-woulda been mine, not saying I would’ve won a medal, but I deserved the opportunity to try to chase one,” she said.

In 1979, the women’s representative for track and field at Nike asked what could be done about the imbalance in track events for women. Hansen then helped to form the International Runners Committee (IRC), where she was president for a period and executive director for another.

“There were 13 people on our committee from different countries, men and women, all movers and shakers in the running community, and we pushed and lobbied and went to Olympic Committee meetings and both the international and domestic federation meetings,” Hansen explained. “We had satisfied everything in the Olympic charter to add a new event, and we were still turned down.”

Before the marathon was let into the Olympics, the IRC filed a class action lawsuit for the 5,000m race and the 10,000m because those were the two races men had that women did not, at the time. It was Hansen who spearheaded the movement by contacting the ACLU and mailing over 100 women runners in the world.

“Eventually we were able to push the marathon in through lobbying because it was so popular. And I can’t prove it, but I know it in my heart that the fact that TV [stations] were interested in [airing] the marathon — that was like the last push the Olympics needed to let the marathon in,” Hansen said.

Although Hansen fought for women’s ability to run an Olympic marathon, she was unable to make it to the first games with her event due to dramatic circumstances.

In April of 1984, Hansen was given her “last chance to qualify for the Olympic trials.” This qualifying race required participants to run under 2 hours and 50 minutes in order to move onto the next round. She remembered the weather distinctly: it was freezing and hailing. Hansen said she was “fine up until mile 25 when [she] began to blackout.” The last sign she remember seeing was a digital clock that told her she was on pace, with a projected finish of 2 hours and 44 minutes. The next thing she knew, Hansen woke up in a hospital bed with an IV bottle overhead, covered in blankets.

“My watch is still running and I’m shivering uncontrollably. The doctor is telling me that my body temperature is under 93 degrees and they’re keeping me there for observation, and the first thing I said was ‘did I finish? and what was my time?’ I had to know,” Hansen said. “I had run 2:48, and I was in 14th place ... but I was ecstatic because I was in for the Olympic trials.” Three weeks after this incident, Hansen went to the trials but was unable to move on, as she wasn’t fully recovered.

The 1984 Los Angeles Olympics were the first games to hold a marathon event for women. Joan Benoit Samuelson, a good friend of Hansen, took home the gold. During those games, Samuelson stayed with Hansen in her L.A. home, and although Hansen was unable to qualify for those Olympic games, she said with a laugh that “even if I didn’t get to chase that medal, at least I got to hold it and it stayed in my house.”

Izzy is a freshman Marketing major from Los Angeles, California. She loves listening to music, eating good food, and babysitting. You can probably find her doing 1 of these 3 things at most times.