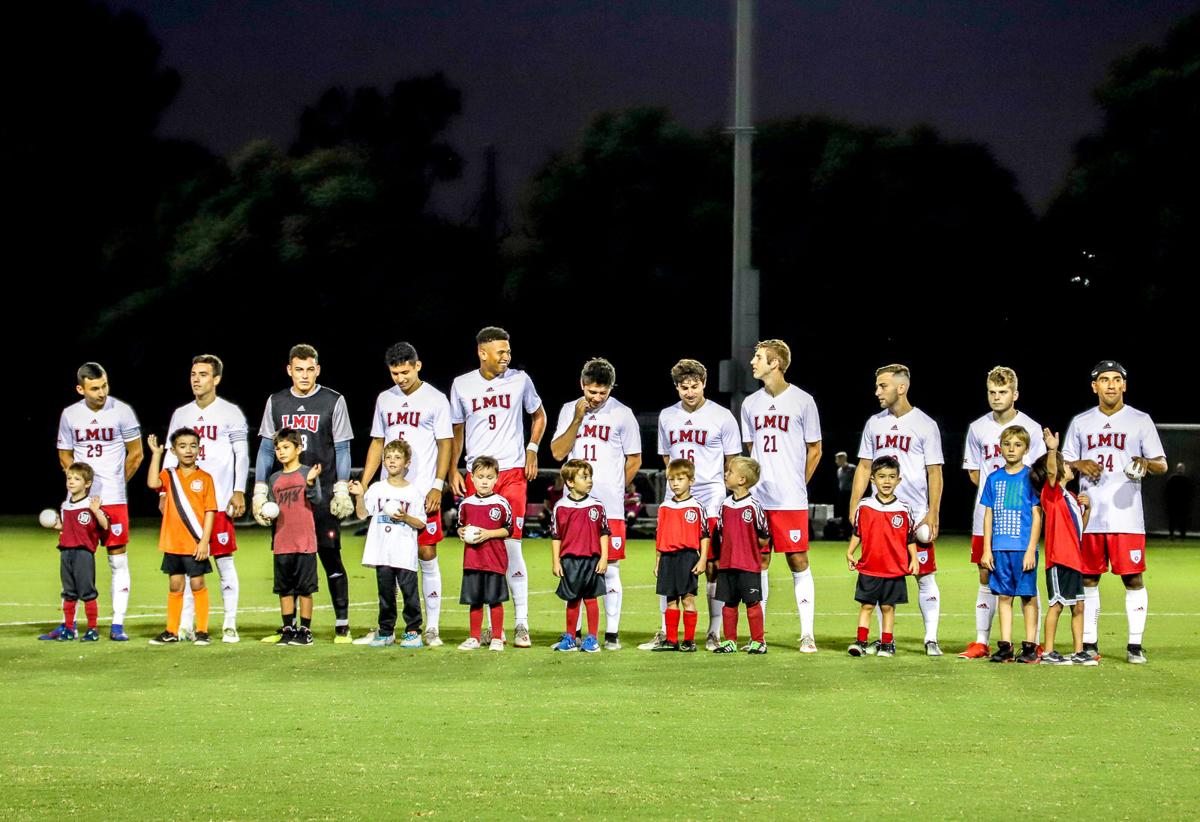 Men's soccer starters stand on the pitch with youth players ahead of a match against Gonzaga on Oct. 12. The Lions earned an NCAA Tournament berth for the first time since 2013. 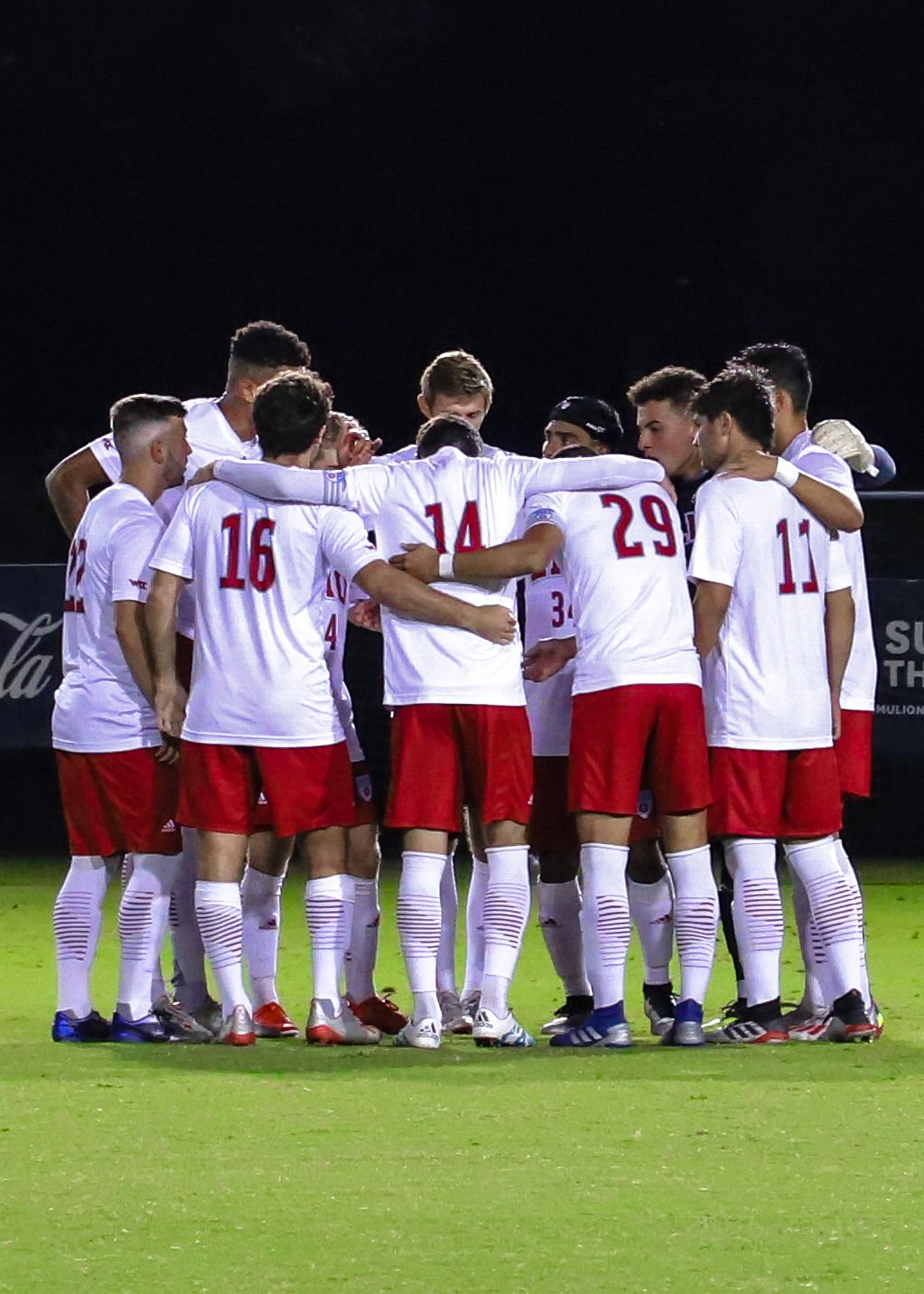 The LMU men's soccer team huddles up before a match.

Men's soccer starters stand on the pitch with youth players ahead of a match against Gonzaga on Oct. 12. The Lions earned an NCAA Tournament berth for the first time since 2013.

The LMU men's soccer team huddles up before a match.

On Monday, Aug. 26, the Lions were picked to finish dead last out of the WCC’s eight teams in the preseason coaches poll. On Monday, Nov. 18, they were selected to the NCAA Tournament after finishing the year as the WCC’s second-place team. It’s one of the most incredible stories in college sports this year.

Quite frankly, at the beginning of the season, it’s easy to see why expectations for the team were so low. They finished sixth in the WCC last season and lost two key players from 2018, in leading goal scorer Kris Fourcand and primary goalkeeper Paul Lewis, both of whom transferred to Cal State Northridge. Confidence isn't instilled when the two biggest concerns going into the season are scoring goals and preventing goals.

The opening game of the season offered hope. Tied 1-1 late, LMU conceded an 89th-minute goal to fall to No. 16 Virginia Tech. Maybe the goal should have been waived off for offsides, maybe not. Either way, the result was still a positive for the Lions. Virginia Tech was seen by some as one of the best teams in the country and LMU had gone back and forth with them for almost the entire game. It offered the possibility that this team could make a little bit of noise.

What happened next, however, shattered everyone’s expectations. The team put together a six-match unbeaten streak. Sophomore Jacob Jackson emerged as the top goalie and, with some help from a terrific back line, conceded a grand total of zero goals over those six matches. They weren’t just competitive. They were nationally relevant, peaking at No. 2 in the men’s soccer Ratings Percentage Index (RPI) rankings.

The rest of non-conference play was a step back. The Lions didn’t get another win outside of the WCC the rest of the regular season. But once the conference schedule began, a different story emerged: three straight extra-time wins to open the conference slate and a road win over No. 23 San Diego. The only conference loss came in a closely-fought contest against conference champion Saint Mary’s. By the time the Lions closed the regular season with a 2-0 win over San Francisco on Saturday, Nov. 16, it was abundantly clear that they deserved to make the NCAA Tournament.

The Lions played as a team in the truest sense of the word. Rather than seeing any star players emerge, numerous players stepped up when they were  needed. No Lion scored more than four goals. Twelve players scored at least one, and 15 players registered at least one assist. Up and down the lineup, players could be counted on to deliver.

The coaching staff also deserves a massive amount of credit. It frequently felt like every personnel decision made by 22nd-year head coach Paul Krumpe was the right move. Entering the team’s match against Gonzaga on Saturday, Oct. 12, sophomore defender Dylan Shockey had played fewer than 90 minutes across just three appearances all season. But Krumpe put him on the pitch in extra time and Shockey rewarded his faith by scoring the golden goal. On a similar note, junior defender Cesar Oliva received very little playing time for most of the season, but Krumpe trusted him on Saturday, Nov. 2 against Santa Clara, and Oliva turned in 33 minutes of mostly stellar defense to help the Lions earn a shutout win.

I had never been much of a soccer fan prior to the fall of 2019. I would casually watch the men’s and women’s World Cup tournaments, but that was basically the extent of my interest. This LMU team changed that. Watching them play together to prove the whole conference wrong made me passionate about soccer. Now it's time to keep proving people wrong. I can’t wait to see what happens next.

The Lions open their NCAA Tournament run by hosting the Seattle University Redhawks at Sullivan Field on Thursday, Nov. 21 at 7:00 p.m.

This is the opinion of Alex Hutton, a junior journalism major from Oakland, CA. Tweet comments to @AlexHutton35 or email comments to mthomas@theloyolan.com.

Alex Hutton is a junior journalism major from Oakland, California. He is a diehard fan of the Warriors, Giants, 49ers, Sharks, Cal Bears and LMU Lions. He lists getting his plays produced and meeting Paul McCartney as among his current life goals.