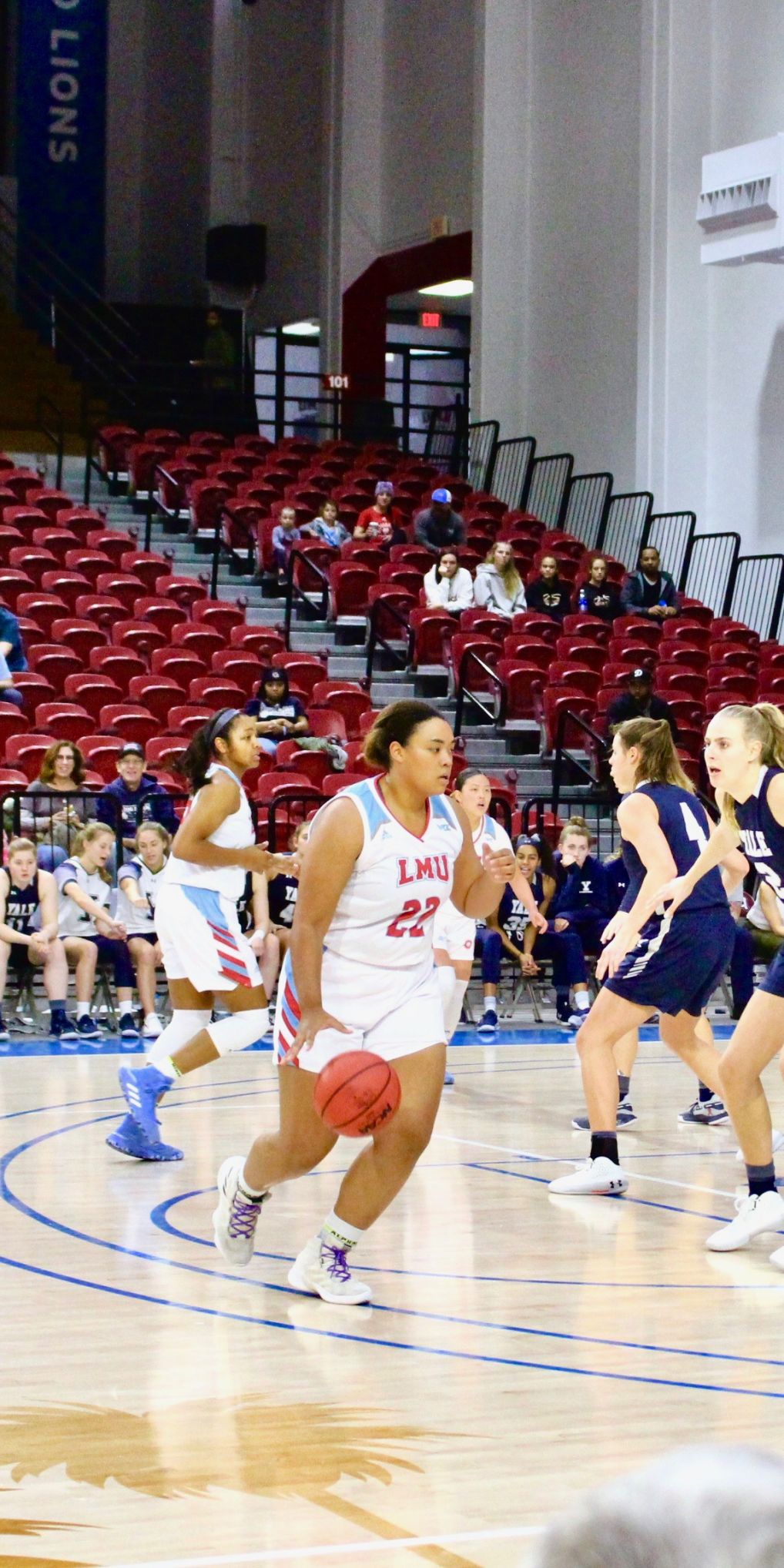 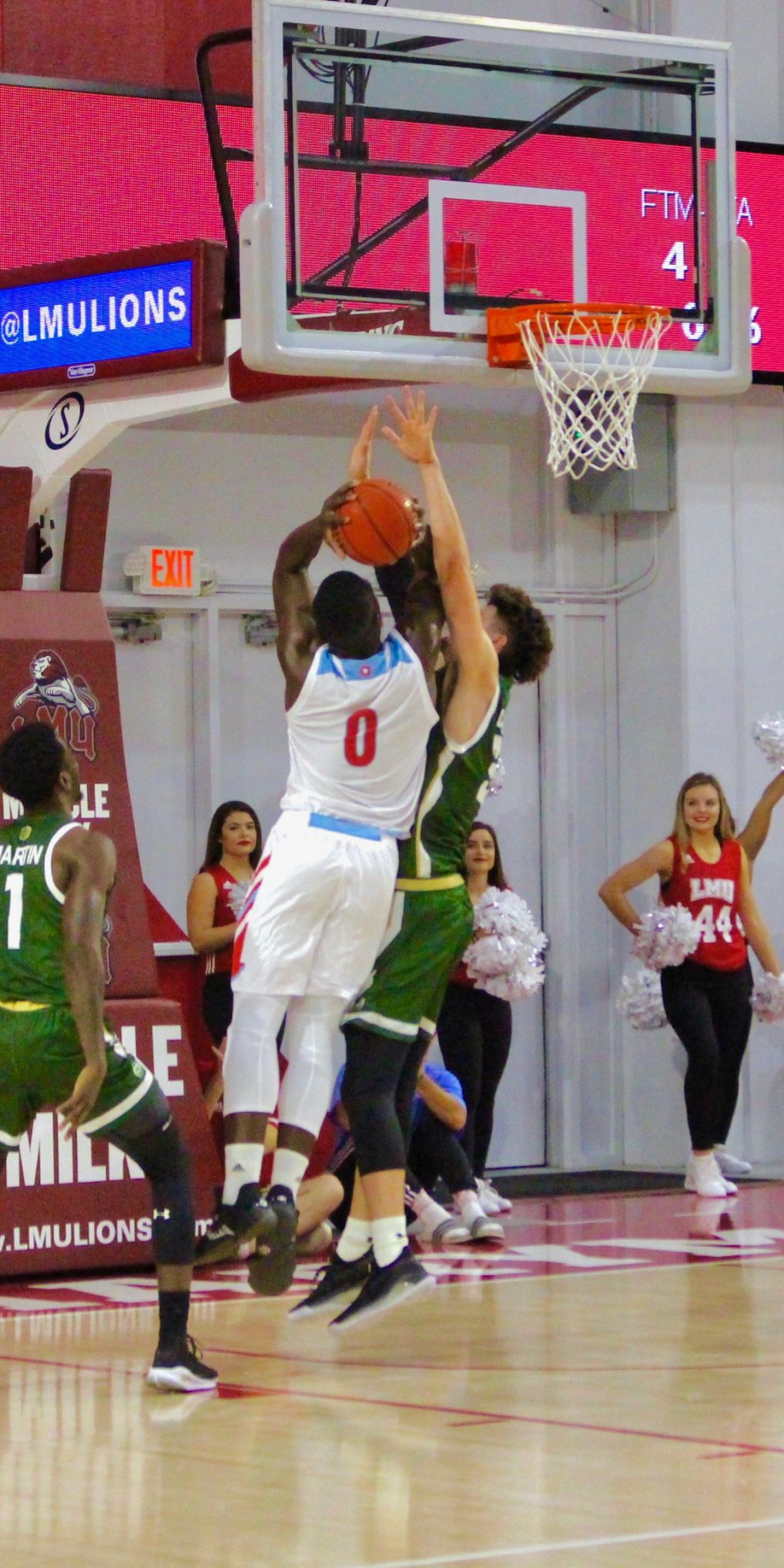 Men's basketball junior forward Eli Scott (0) goes up against Colorado State on Saturday, Nov. 16. Scott was the team's best player at the Junkanoo Jam tournament, which took place from November 21-24 in the Bahamas.

Men's basketball junior forward Eli Scott (0) goes up against Colorado State on Saturday, Nov. 16. Scott was the team's best player at the Junkanoo Jam tournament, which took place from November 21-24 in the Bahamas.

Over the break, both basketball teams competed in early-season tournaments. The men’s team posted a record of 1-2 at the Junkanoo Jam in the Bahamas while the women’s team went 0-2 in the LMU Thanksgiving Classic at Gersten Pavilion. Here are three takeaways from LMU’s performances at the respective tournaments.

3. Three-point shooting determines success: The formula for the Lions during the tournament was simple: if they shot well from long range, they would have a chance to win the game. If they shot poorly from beyond the arc, they wouldn’t. In a 78-64 win over Air Force, they hit 50% of their three-point tries, but posted marks of 21.4% and 33.3% in losses to Indiana State and Duquesne, respectively.

2. Improvement in avoiding foul trouble: LMU is relying heavily on a number of inexperienced players this season. Often, players who are not used to college basketball will commit fouls frequently as they struggle to keep up with the play on the court. Over the course of the three games in the Bahamas, the Lions made progress in this category. They fouled 22 times against Air Force and 24 times against Indiana State, but picked up just 16 fouls against Duquesne.

1. Eli Scott emerges as the team leader: With as many new players as the Lions have, at least one of the veterans was going to have to take the reins of the team at some point. At the tournament, as he has been doing throughout the season, junior forward Eli Scott filled that role. Scott scored in double figures in all three games, grabbed 10 rebounds against Indiana State and dished out nine assists against Air Force. He was named to the Junkanoo Jam All-Tournament Team for his efforts. He currently leads the team in both rebounds and assists and is second in scoring. The Lions will continue to rely on him in all facets of the game.

3. Too many turnovers: In each of their two losses, which came against Georgetown and Yale, the Lions turned the ball over too often to have a chance to win. They committed 17 turnovers against Georgetown and 14 turnovers against Yale. The turnovers came in a variety of ways, such as ill-advised passes, losing the handle and offensive fouls. Additionally, many of the turnovers came at crucial stages in the game. Often when the Lions had a chance to get back into the contest, they would commit a costly turnover and kill a potential rally. Turnovers have been an issue for LMU all season. In the first seven games of the season, the Lions have committed 62 more turnovers than they have forced.

2. Unable to keep opponents off the offensive glass: Defensive rebounding was another area where LMU struggled. Against Georgetown, the Lions allowed 15 offensive rebounds and 12 second-chance points in a game they lost by 11. Their rebounding improved slightly against Yale with only 12 offensive boards allowed, but the Bulldogs managed 18 second-chance points en route to a 16-point victory.

1. Raychel Stanley excels despite losses: Even though LMU went winless over the course of the tournament, senior center Raychel Stanley was a major bright spot. The team counted on her to score a lot out of the post. The Lions frequently turned to her and fed her the ball when a bucket was needed and she answered the call. She scored 13 points against Georgetown and 15 points against Yale, both of which led the team. She has now scored in double figures in five consecutive games and is LMU’s leading scorer thus far in the season. Her defense was also strong throughout the tournament, especially in the game against Yale, where she recorded three steals.

This is the opinion of Alex Hutton, a junior journalism major from Oakland, CA. Tweet comments to @AlexHutton35 or email comments to mthomas@theloyolan.com.

Alex Hutton is a junior journalism major from Oakland, California. He is a diehard fan of the Warriors, Giants, 49ers, Sharks, Cal Bears and LMU Lions. He lists getting his plays produced and meeting Paul McCartney as among his current life goals.