Skip to main content
You are the owner of this article.
Edit Article Add New Article
You have permission to edit this article.
Edit
NEWS
OPINION
LIFE+ARTS
SPORTS
THE BLUFF
CARTOONS
SOCIAL JUSTICE
VIDEOS
CLIMATE 360
CENTENNIAL
SPECIAL ISSUES
MORE
1 of 2 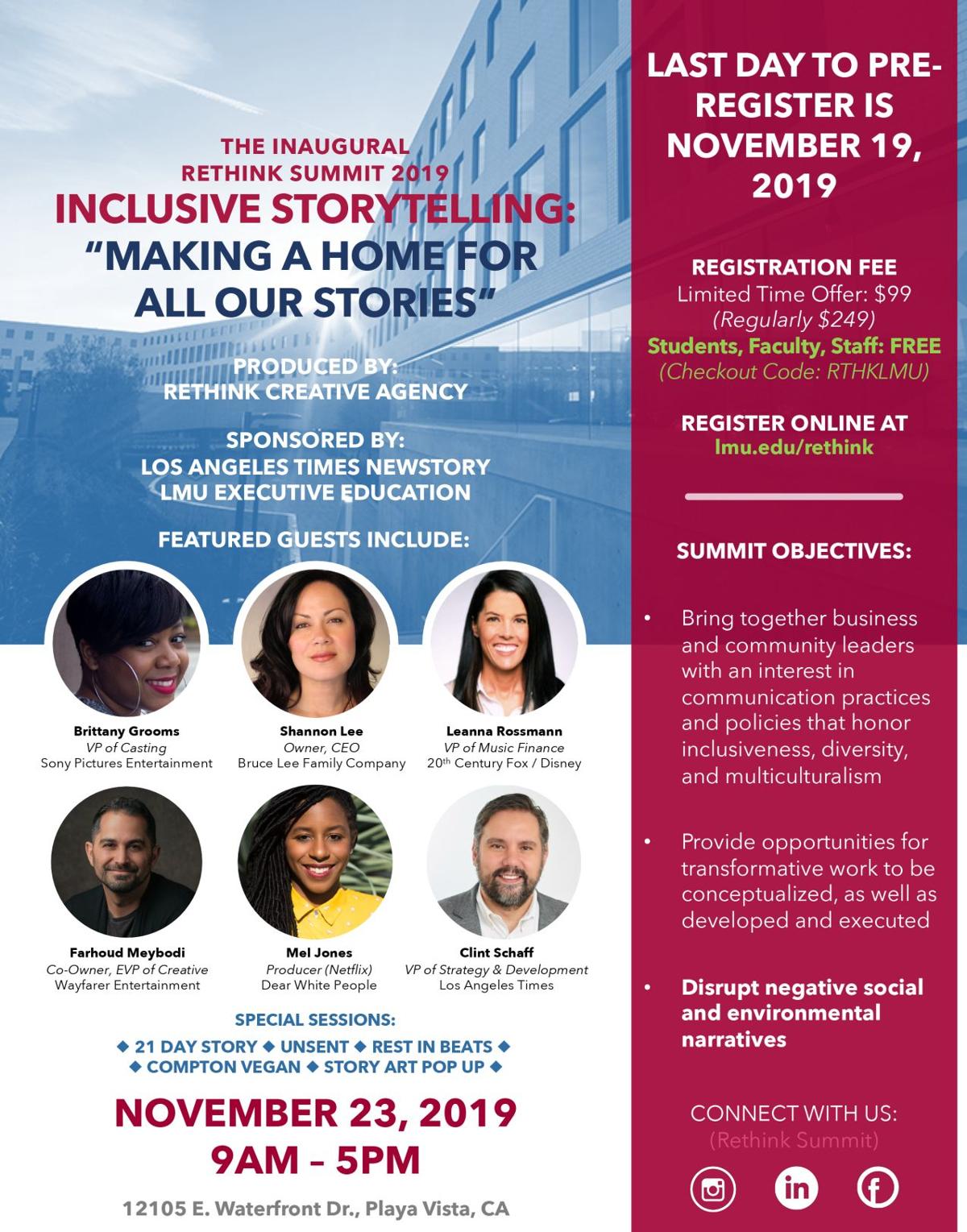 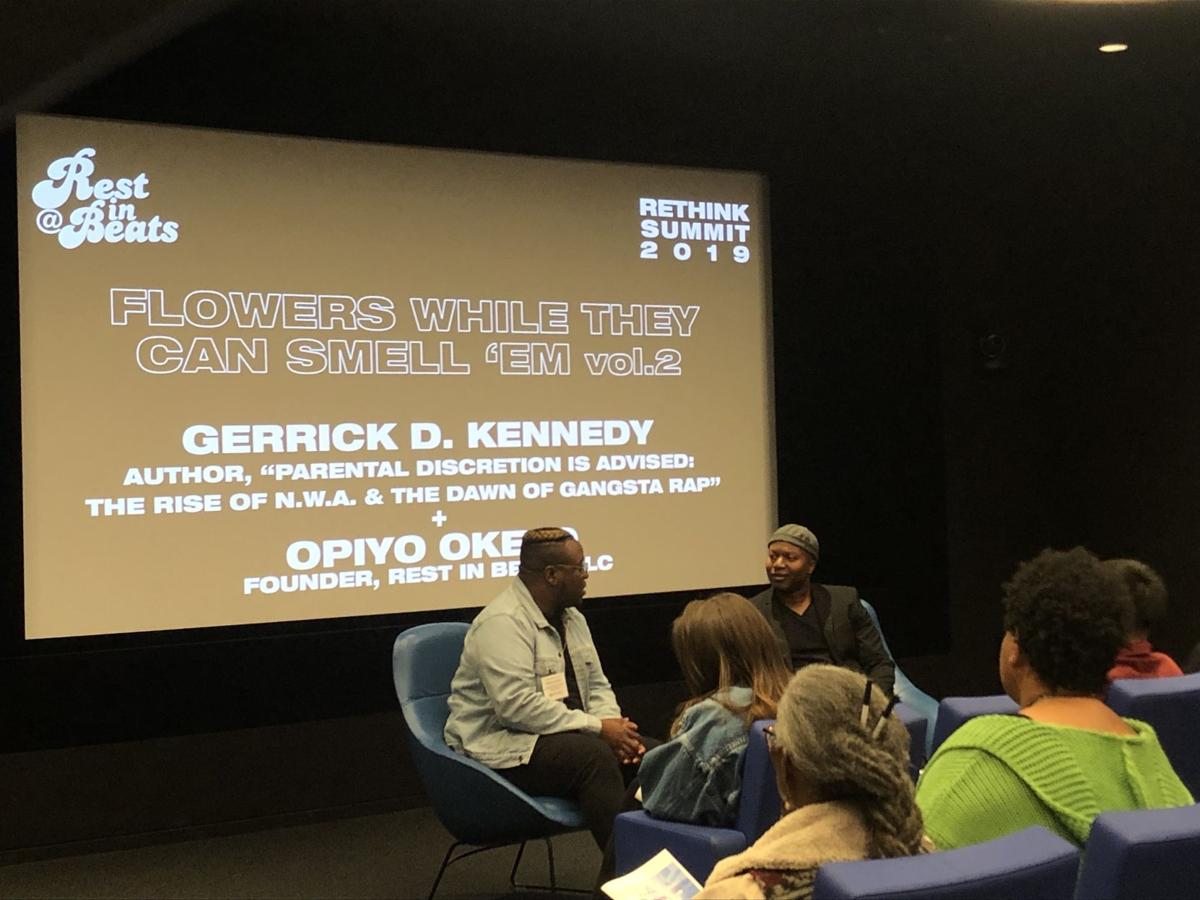 The inaugural ReThink Summit encouraged discussions about diversity, inclusiveness and multiculturalism implemented by businesses. The event was produced by the ReThink Creative Agency and held at the LMU Playa Vista Campus on Nov. 23. ReThink Summit consisted of six sessions of panels and multiple special sessions featuring organizations such as 21 Day Story, Unsent, Rest in Beats, Compton Vegan and more.

In the first session, Opiyo Okeyo, founder of Rest in Beats and a filmmaker, interviewed Gerrick D. Kennedy, author of “Parental Discretion Is Advised: The Rise of N.W.A.” and “The Dawn of Gangsta Rap.” The two storytellers discussed Kennedy’s newest works and how the music industry has affected them.

The second session titled, “The [Untold] Stories of Female Leader,” featured a powerful lineup of female executives, featuring Leanna Rossmann (Global Head of Music Finance at 20th Century Fox / Disney), Effie Brown (Founder of Duly Noted Inc.), Shirley Richter Hughes (President of Brand Marketing at Rogers & Cowan), Carla V. Santiago (Co-founder and Head of Partnerships at UNCMMN), and Angelica Gutierrez, Ph.D. (LMU Associate Professor of Management). The panel consisted of discussions of their experiences within the industry and how imposter syndrome–the feeling that you don’t belong in the position you are in—has affected them in the industry.

Junior management major Noel Henderson, who attended the panel, said “one of the biggest things that I learned is that we all don’t know what we’re doing because I feel like sometimes we compare ourselves to other people [and think] ‘Oh they have it all figured out. They know what they’re doing' when in reality they don’t, so there’s no reason to compare yourself when no one knows what they’re doing.”

Catheryn Mallari, a senior marketing major, said, “I think it’s been a great turnout. I think it’s [important to create] creative spaces ... where people can have those courageous conversations and [have] engagement from people that … really [care] about these kinds of topics… and [want] to carry it out in their professional lives ... [ReThink] is an inaugural event so I look forward to seeing what happens afterward."

Mallari was one of the students involved in a project between LMU’s A-List program and Vector90. Nipsey Hussle, an LA artist, activist, entrepreneur and professor of the A-List program who was caught in a fatal shooting a week prior to his first week teaching officially at LMU. During the third session, a private screening of the documentary created in memory of Hussle was previewed, giving the audience a snapshot into the life of Hussle and the social impact he left on his community and audience.

The fourth session featured a panel highlighting VP of Casting at Sony Entertainment Pictures Brittany Grooms, Producer of Netflix's "Dear White People" Mel Jones, VP of Production at Color Creative Sara Rastogi, and Associate Professor of Marketing, Julian Saint Clair, Ph.D. Panelists were encouraged to discuss the marginalization of certain groups in movies, music and media. Following the panel was an interactive discussion with Grooms, Jones and Rastogi to take a further look into their experiences in the entertainment industry.

Session five discussed the impact of transformative storytelling. Farhoud Meybodi, the co-owner and Executive Vice President of Creative, Wayfarer Entertainment, and Shane Keough, the founder and CEO of WeGoFor2, each held an individual discussion, discussing how the inclusivity of the community around their businesses and audiences can affect their brand.

Lastly, session six was a panel with Donna Pahel, the founder and CEO of 21 Day Story, who shared her experiences and taught the importance of transformative change. Pahel's panel, titled "Curiosity Thrilled the Cat," discusses how creating a culture of curiosity in the workplace can drastically transform a business.

Throughout the day, business people and students alike were able to hold open discussions to discover how businesses are able to create meaningful social impact and how storytelling is one of the most used tools in business and media alike.

Sammi Su is a junior marketing and Asian and Pacific Studies dual major from West Covina, CA. In her free time, she loves exploring new food spots and making videos with friends.