The Los Angeles Clippers currently share Crypto.com Arena with the Los Angeles Lakers, making them the only two NBA teams to share a stadium. However, the Clippers will soon have a place to call their own. Intuit Dome, the new home for the Clippers and a $2 billion construction project, is set to open for the 2024-25 NBA season, though construction broke ground in September 2021.

The arena will be on the corner of 102nd Street and Prairie Avenue in Inglewood, California, just south of SoFi Stadium, home of the LA Rams and LA Chargers. The area will figure to be a hub for Los Angeles sports fans and a great place for LMU students to cheer on their local teams.

"[I’m excited] to be able to build history here in Inglewood — to be a part of something great, to call this our home and to actually have a home space [is great]" - Paul George

George was traded to the Clippers in 2019 after playing for the Oklahoma City Thunder. As a Southern California native, George is especially ecstatic about the new arena.

“[I’m excited] to be able to build history here in Inglewood — to be a part of something great, to call this our home and to actually have a home space [is great]. We're super excited. We’re looking forward to it,” George said.

Green began the press conference on the arena by saying, “I can tell you, in confidence, this venue will be very, very special. For starters, it’s going to be nice to have a place to call our own.”

The 2022-23 season is quickly approaching, with the Clippers’ first regular season scheduled for Oct. 20 against the Lakers at Crypto.com Arena. Although the team will be finishing out these next two seasons at their present location, it’s only a matter of time until they run, dribble and shoot on their very own court at Intuit Dome.

Green explained that the arena project wanted to explore how to use technology to “leverage the best-in-class fan experience.” That mentality is expressed through several of the arena’s planned features, including a double-sided “halo” video board that features 44,000 square feet of LED lights. Compared to the average of 7,000 square feet of LED lights on the average video board in other NBA arenas, this is just one way that Intuit Dome is planning to stand out from the rest. The board will include more advanced stats, more replays in 4K and better views for all fans throughout the stadium.

“The building is built to immerse fans in the action. We’re able to bring all the seats of the building closer to the court. To put that in context, row twenty at the baseline of Intuit Dome is going to be forty-five feet closer to the court than where we play today [at Crypto.com Arena]," said Green. "Everyone is going to be more on top of the action and much, much closer.”

If you’re a tall Clippers fan, this new stadium may especially excite you — according to Green, the stadium’s designers kept the fan experience at the forefront of their minds. “We’re actually going to have the most leg room in the NBA,” said Green.

Green went on to reveal that the arena will also include “concession stands with grab-and-go marketplaces” and “two times the number of restroom fixtures as your typical NBA arena,” so fans can avoid long lines.

Another unique factor of the arena is that it won't include any clubs or suites. It will also include The Wall, which will be placed behind the basket next to the visitors' bench.

“This is 51 rows of just uninterrupted home-court advantage,” Green said. The Wall will seat around 5,000 fans and give die-hard fans the opportunity to not only have better views of the court, but to come together and cheer as loud as they can in the visiting team’s ears.

The Clippers went 42-40 in the 2021-22 season. Last year, they finished in ninth place in the Western Conference. A new stadium curated to promote the best fan experience may help the Clippers generate a strong fan base with ample support; it may also strengthen the team’s identity and contribute to improving the team’s record.

The travel time from LMU to the stadium is a smooth 20-minute drive. With such close proximity to campus, Intuit Dome is a great place for LMU students to cheer on a local sports team and enjoy the great environment Intuit’s designers are aiming to provide. 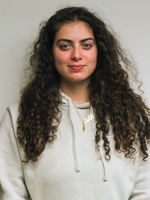 Bella Luppino ('24) is a communication studies major from San Francisco, Calif. She loves soccer, working out and sneakers.