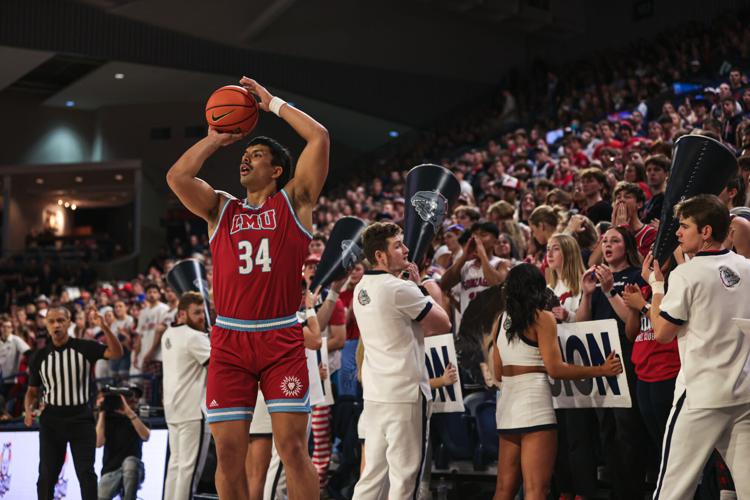 The Lions defeat the Zags on the road for the first time in program history. 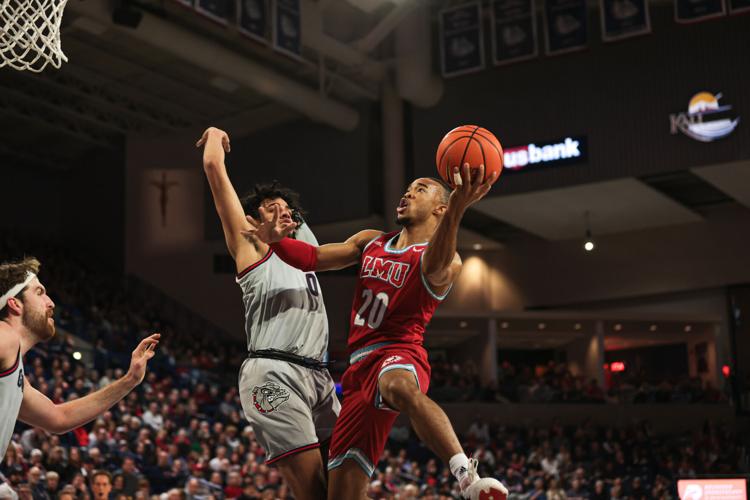 Cam Shelton was named West Coast Conference (WCC) Player of the Week for his performance against Gonzaga University on Jan. 19.

This article has been edited from its original form.

Who would have thought we would see the day? On the road with all odds stacked against them, the LMU men’s basketball team was able to execute one of the greatest wins in program history.

The Lions made a statement on Jan. 19 when they defeated the No. 6 Gonzaga University Bulldogs for just the fourth time in program history, and the first time on the road in Spokane, Washington since 1991. This victory against Gonzaga snapped the Lions’ 25-game losing streak against the Zags, with their last win dating back to the 2009-2010 season.

Beating Gonzaga holds more significance than beating any other team. The Lions snapped Gonzaga’s 75-game home winning streak, which was the longest active winning streak in the nation. For LMU, the team had not beaten a Top 10-ranked opponent in 62 years, with their last win coming in 1961.

Additionally, the Lions are the first unranked team to beat Gonzaga in 93 games — the Bulldogs had the second longest win streak in history against unranked teams.

How on earth did the Lions pull it off?

All year, the Lions and Head Coach Stan Johnson have continued to adapt their game plan and make the proper adjustments to remain competitive against top competition.

The start of the game showed promise for the Lions, leading to a close battle in the opening period. LMU's ability to make adjustments was critical for the group — especially with Gonzaga pulling away later in the half. Typically, this is where the Lions would lose games in previous years, failing to make the proper adjustments after opposing teams went on runs.

The Lions responded defensively, earning multiple stops and cutting the deficit to one with Gonzaga leading 33-32 at halftime.

The Lions caught fire in the second half thanks to graduate guard Cam Shelton. Shelton was by far the best player on the court, recording 27 points, nine rebounds and two assists. Elsewhere, junior guard Jalin Anderson and senior forward Keli Leaupepe both made significant contributions offensively that helped the Lions pull away. Anderson finished with 15 points, while Leaupepe recorded with 11 points and seven rebounds.

Junior forward Michael Graham deserves a lot of credit in helping the Lions pull through against the Zags. Graham came up huge both offensively and defensively, tallying nine points, three blocks and 10 rebounds — with five of them being offensive boards. Graham and redshirt junior center Rick Issanza came up big defensively, slowing down forward Drew Timme.

The Lions would lead for the majority of the second half, with their largest lead being 53-44 midway through the second period. Despite the momentum being on the Lions' side, the Bulldogs answered with an 8-0 run to retake the lead by one.

Coach Johnson and the Lions' late-game clock management helped the team win this game. The Lions shaved off crucial seconds that could have allowed the Bulldogs to gain dangerous momentum. Even better, the Lions did numbers offensively on the glass late in the game, allowing the team to reset and take more time off the clock.

It was also Shelton who secured it for the Lions, putting up a performance of a lifetime along with a go-ahead, game-winning layup to give the team the lead in the dying moments of the game.

The Lions received praise from the conference and the country at large. The team was awarded NCAA Team of the Week, while Shelton received honors as West Coast Conference (WCC) Player of the Week.

This is one of, if not the biggest, wins in school history. For this group, beating Gonzaga at home is a testament to the historic season they have displayed.

While at one point it seemed like an impossible goal, a March Madness tournament appearance is now a possibility for this group. All that's left for the Lions is to pursue and expand upon what they have already done this season. Don't look now, but Johnson's boys might have just vaulted to a new standard. Only time will tell.

This is the opinion of Khassim Diakhate, a sophomore journalism major from Seattle. Email comments to cgalanti@theloyolan.com. Tweet comments to @LALoyolan and like the Loyolan on Facebook.

Khassim Diakhate ('25) is a journalism major from Seattle. He enjoys watching the Portland Trail Blazers and not losing in NBA 2K.