Skip to main content
You are the owner of this article.
Edit Article Add New Article
You have permission to edit this article.
Edit
NEWS
OPINION
LIFE+ARTS
SPORTS
THE BLUFF
CARTOONS
SOCIAL JUSTICE
VIDEOS
CLIMATE 360
CENTENNIAL
SPECIAL ISSUES
MORE
1 of 3 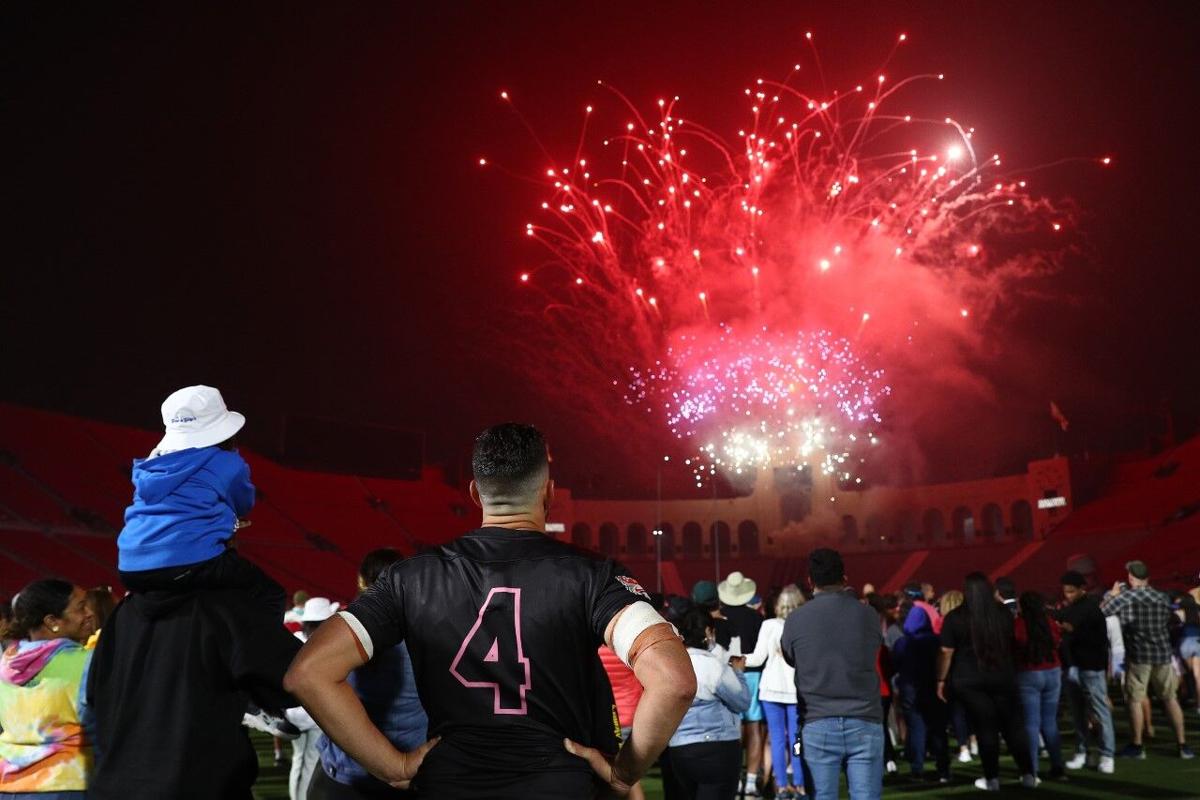 LA Giltinis player Dave Dennis looks on as fireworks erupt over the Los Angeles Coliseum during the 2021 season. 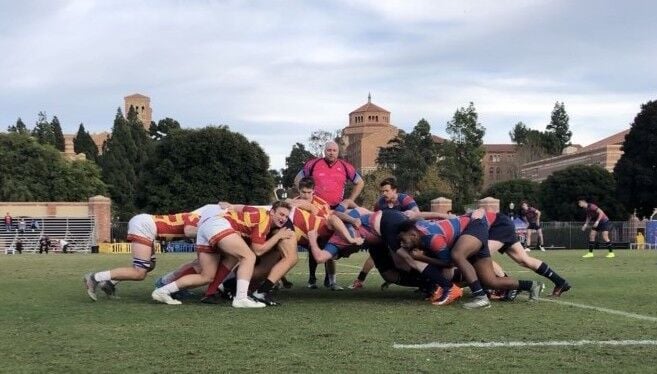 Loyola Rugby faces off against USC during a match.

A throwback from the Loyola Rugby archives.

EL SEGUNDO, CA — On a quiet street filled with upscale apartment complexes, warehouses and startup spaces, there lies a nondescript building that looks just like the countless others that surround it. There are no distinctive features, no signage hanging outside that identifies it. It would be easy to drive right past it and not even notice what you missed.

Though the exterior is unremarkable, what goes on inside that building is more exciting than it seems. It’s the headquarters for the Los Angeles Giltinis, Major League Rugby (MLR)’s newest addition. The team’s operations are almost completely self-contained, with the business and marketing departments only a step away from the team’s gym, locker room, coaches’ offices and even a state-of-the-art coffee bar. The space is modest but growing, reflective of a bigger movement —rugby is finally here in America, and it’s starting to take off.

“I think the potential of the future of rugby in the United States is almost unlimited,” said David Grunfeld, the manager of Business Operations for the Giltinis. “We've seen with our team, there's a craving and a demand for people to come watch rugby and have a good time watching professional players do it. All the pieces are there.”

The Giltinis are entering their second season with MLR and have already found success, winning the league championship in their inaugural season. The team competes at the Los Angeles Coliseum and is committed to getting as involved in Los Angeles as they can — and bringing rugby with them.

Rugby is finally taking root, but it has taken a long time to get here. The United States may be the most sport-crazed country in the world, but where some countries have laser-focused their devotion onto singular sports, the U.S. supports hundreds of professional, collegiate and amateur teams, ranging across nearly every sport imaginable. America has proved its willingness to spend time, energy and copious amounts of money on athletics, but with almost every other sport accounted for, why hasn’t rugby been among them?

The necessary aspects all seem to be there: rugby is a fast-paced contact sport that stays exciting with numerous possession changes, athletes are vaunted as being the toughest in the world for taking hits and tackles without the protection of pads or helmets and the game utilizes rules and statistics that are easy to keep track of once you know them. In fact, American football developed from the roots of rugby, meaning that most Americans should be familiar with the basics — or at least should be able to pick them up quickly.

In the modern sporting landscape that is obsessed with advanced statistics, rugby provides a refreshing change of pace: there are only a couple of statistics categories that matter for each player. Where other supposed team sports can focus on individual performance, rugby’s focus is, really, actually on the team. Together, those ingredients should have the makings of success, but America has historically been slow on the uptake.

In addition to the technical aspect of the game, rugby has developed a culture unlike any other sport over its rich 200-year history. It is now one of the most popular sports worldwide, both to play and watch. According to World Rugby, almost 10 million people play rugby around the world, from its birthplace in England to the rugby hotbed of Oceania and nearly everywhere in between. In many ways, rugby has influenced entire cultural identities, and has contributed to putting smaller nations like Fiji, Tonga and Samoa on the map for good. What truly sets it apart however, is that for millions of people, rugby has been more than a sport. It’s a lifestyle, and the values of the game have become cornerstones for the people who cherish it most.

Those values include respect, integrity and, most of all, community. Spend any time in rugby-oriented circles and this fact becomes immediately apparent.

“If you get involved with rugby, you're going to have a new group of people that are going to care about you and that you're going to care about,” said Grunfeld. “There's a social component to rugby that you don't get when being involved in other sports. It's almost like a built-in package...I think that's such a unique, cool thing that is a main reason for somebody who's never heard of this before [to get involved].”

Those sentiments were echoed by Alana Gattinger, the Giltinis’ director of Rugby Operations and Business Operations, as well as Giltinis forward Adam Ashe.

“It's like a little family. Every rugby club you go to, it's just very tight-knit and it's a cool thing. So I think a lot of people, you know, the young kids who haven't found their niche in other sports, I think could really find something they love in rugby. So it's really cool to see people try it out, I’d love to see more people do that,” said Gattinger, who joined the team after two World Cup trips as part of the Canadian national team staff.

“Rugby has values that have been around forever — a couple hundred years, maybe even longer. Respect, discipline, hard work, community, camaraderie,” said Ashe, reflecting on growing up playing rugby at home in Scotland. “Certainly rugby has been the biggest contributor to my own value system; how I look at the world and how I treat people, how I generally interact with the world. Rugby has had a lot to do with that.”

A few miles away from the Giltinis headquarters, another team is making strides to promote rugby in their community. Rugby has a long history at LMU, with Loyola Rugby remaining in operation for over 60 years. Don’t be mistaken — team members are quick to point out that it’s just Loyola, not LMU Rugby, as the team dates back to 1958, 15 years before the merger between Loyola University and Marymount College occurred in 1973.

Like many club sports, it may not receive the recognition of its varsity counterparts, but the team has reached success in its long history. It is consistently ranked among the best club teams on campus, and they compete as part of the Gold Coast Conference for Intercollegiate Rugby (GCCIR) against other university club teams like USC, UCLA and Cal State Long Beach as well as development academies sponsored by professional teams. The club also draws both newcomers and veteran players alike, such as Nick Miller, a junior management major and the team’s safety officer, who has been playing for nearly a decade.

“I just had friends in middle school who were like, ‘Dude, you have got to come out and try this. You'd be very good at it, you'd have fun.’ I used to play baseball and stuff but I started playing rugby and kind of focused on that. I dropped my other sports,” said Miller. “I just focused on rugby. I had so much fun playing it and it's just a good group of people at the end of the day.”

Veterans like Miller are valuable to the team, which is the first exposure to the sport for many players.

“Last season, I think over half of our starters were rookies,” said Wilson Chatham, a senior entrepreneurship major and Loyola Rugby’s social chair.

With only one coach, teaching responsibility often falls to veteran players to help out their less experienced teammates. That’s not the only struggle with keeping the team going; with such limited visibility to those outside of the rugby realm, it is often difficult to obtain the resources needed. The team relies heavily on alumni donations, the conference has faced tumultuous change in recent years and, as a club team, there are no recruiting opportunities available. However, the passion for the sport runs deep, and the team is feeling confident going into the 2022 season.

“I think we have a chance to be really competitive,” continued Chatham.

In the end, there are many emerging opportunities for people who want to start playing. But the bigger draw is that there’s a place in the game for everyone. Whether that’s on the field or in the stands, everyone is welcome.

Rugby is here. It’s accessible, it’s exciting and it’s only getting bigger. It’s time for America to see what it’s missing.

This is the opinion of Catherine Galanti, a freshman journalism major from Los Angeles. Email comments to ekinney@theloyolan.com. Tweet comments to @LALoyolan and like the Loyolan on Facebook.

Catherine Galanti is a freshman journalism major from Los Angeles. She believes that the best era of baseball was when every team had powder blue uniforms.